: You may cast target instant or sorcery card from your graveyard this turn. If that spell doesn't target a creature you control, it costs more to cast this way. If that spell would be put into your graveyard, exile it instead. Activate this ability only once each turn. (You still pay the spell's costs. Timing rules for the spell still apply.) 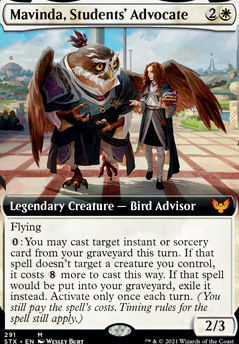 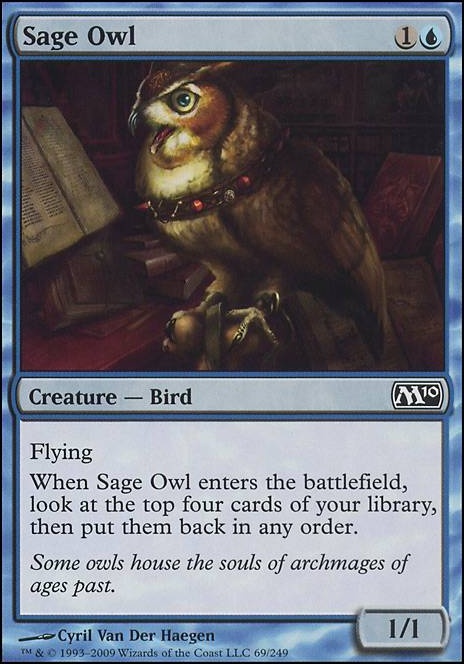 Some cards of interest off of EDHRec

Hey zapyourtumor, thanks so much for the detailed look! The deck is definitely still in the first iterations, so all these comments are super useful.

Sejiri Shelter Â Flip has been pretty good to me, but I did shave one off to the side because of that exact reason (ETB tapped land). The most useful thing about the MDFC's is that they can be pitched to the Incarnations, but Malakir Rebirth Â Flip is clearly superior for this deck. Protecting a Germ from an Archmage's Charm or giving Kaldra pseudo-unblockable has definitely saved my bacon a few times, though.

I generally stick to 2 max of a legendary creature in any given deck, but being able to pitch extra copies of Mavinda, Students' Advocate to Solitude makes it not nearly as bad to draw multiples. She's definitely a card I want to see every game and I've found 2 to be a little to infrequent to draw them consistently. Her being a flyer also makes her wield a Sword extra well.

Damn is mostly good to clear the entire board sans Kaldra Compleat, them being indestructible of course. Having the option to cast it single-target is nice, but yeah, Push and Solitude tend to cover that field generally well. Definitely like adding a Kaya's Guile to the mainboard though, I might be able to make some space for that. I agree that 2 yard hate cards in the entire 75 is too little. I was also looking at Thoughtseize but the problem I kept running into is that in no time, both decks run out of hand and then we're just topdecking, and I'm drawing all these cute synergy pieces one by one and the opponent just presents threat after threat and I lose. I'm trying for the more sustained value of blinking things and having a bit of recursion and card advantage, focusing more on sticking Kaldra and protecting them/clearing the way for them, than on the turn 1 Grief Ephemerate rip hands now I have a 3/2 and we both have no cards strategy. Maybe some more discard in the sideboard would do?

As for the hate cards:

Chalice of the Void looks real sweet and I might spring for two of them if they ever drop in price a bit. Chalice on one would kill most of my decks :')

Void Mirror kind of shoots my Incarnations in the foot, and I feel like Tron just gets around it by fetching a single Forest. I've considered Drannith Magistrate against Cascade though, and if I go back up to 3 Kaya's Guile I might be hedging enough to have a chance against Living End...

Stony Silence looks sweet and I should really get a few.

Kaya, Orzhov Usurper seems super strong. I can't believe I missed her when RNA came out!

Engineered Explosives is a card I run in CHARON // Seldom Headed Upriver, and it is absolutely bonkers with Lurrus. I got them when they were cheap though... When that reprint hits, I'm definitely getting some more!

Would this work as a Lutri companion combo?

I think if you want to play both Zada and Mirrorwing that you also want a more robust token theme because that's how you get tons of value from these creatures. The only reason Precursor works here is because it creates tokens and it's a weak card. You only have 13 creatures including Feather; without tokens you don't have enough creatures for Zada and Mirrorwing to make enough value for their mana costs. For example without tokens Bandage for one mana on each player's turn could repeatedly draw more cards quicker than Zada.

Strixhaven and Modern Horizons 2 have at least two cards that have been upgrades in Feather. Blacksmith's Skill is an upgrade of a protection spell, giving both indestructibility and hexproof for one mana. When you target a permanent if it's a creature you control then it will trigger Feather. The spell doesn't have to say target creature, target permanent works if the permanent is a creature.

Mavinda, Students' Advocate ability seems that it was designed for Feather since playing so many low CMC instants that target a creature you control. Once on each player's turn you can cast an instant (on your turn you could cast a sorcery instead) from your graveyard that targets a creature. If you control Feather she triggers to put that spell into exile before it goes to the graveyard. Then at the next end step that spell is returned to your hand to be cast at next player's turn.

Mavinda is similar to Dreadhorde Arcanist , but is actually an upgrade since can use his ability on each player's turn rather than once when you attack with Arcanist. There's so many one and two drop instants that having to pay mana to cast the spell with Mavinda is a tiny drawback. Mavinda and Arcanist are backup ways to cast instants or sorceries from your graveyard with or without Feather and with Feather it's busted repeatable recursion.

Have you thought about running 1-4x Mavinda, Students' Advocate to have another creature with a similar effect to Feather, the Redeemed ? Or maybe a couple Search for Glory 's to Tutor for Feather?

Those are my only suggestion, your deck is solid. Those are just a couple of ideas that leaped out at me.