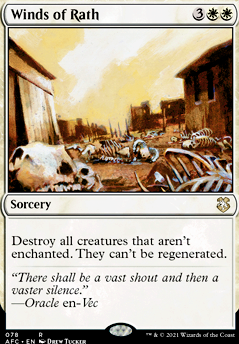 Destroy all creatures that aren't enchanted. They can't be regenerated.

Hiya! I've got a few concerns with the list. The major one is the fact that you have almost no card draw in your deck. I only counted 3 cards that could generate you card advantage, so I worry that your deck will run out of gas and/or can get blown out really easily by a board wipe. The other is some rather interesting card choices. A few examples: You play Winds of Rath in the deck, but you only play a pair of auras. Slash the Ranks seems like a cool card, but this deck seems to want more creatures on board than just your commanders, so it feels like a non-bo too. You've also got a lot of equipment and synergies to go with it, but your commanders don't really encourage equipment. Ardenn, Intrepid Archaeologist is probably better for that. Akroma + Rograhk wants you to go wide with aggressively costed key-worded creatures. So I would suggest cutting by a lot on the equipment synergies as well as cutting a lot of your high-cmc creatures and getting more low-cost key-worded creatures along with ways to protect them and ways to rebuild when you get blown out. And of course, more card draw.

Definitely going to look into fitting some of these in, and Emeria is going right into the $$$$$ maybeboard! From playtesting so far it's been a lot of fun having a monored commander in a monowhite deck, haha. It's the kind of quirky uniqueness I appreciate in a deck. And if I keep finding cards that make monowhite a stronger option, and the addition of red doesn't end up giving me anything that's truly game winning, I just might end up keeping it this way!

Danitha is neat and I did consider her! Might give her another chance and see if I can find a slot for her. She's especially nice in an equipment-based build like this since she can bring the cost of all equipments down, while she'd be wasted on auras with fully colored mana costs.

And you're right, this is a good deck for Flickering Ward haha.

I'll keep Winds of Rath in mind in case I add enough equipments to make it worth it, but right now I don't see the deck going in that direction. And finally... Hot Soup is a fun card! Only reason I didn't add it is that Rograkh has so much built-in evasion already, and for just one more mana I can make him unblockable with no downside and without requiring indestructibility. And it was a lot of fun realizing that menace meant Vorrac Battlehorns just made it flat out unblockable.

But yeah, thanks a lot for the comment and suggestions! They definitely help!

I really, really like the idea of taking this mono white! I think that would be a really unique route to take! If you do end up sticking to one color, you could consider including Armored Ascension and Emeria, The Sky Ruin. Emeria can be really useful if your commander gets expensive in the late game from it being removed so often...

Danitha Capashen, Paragon does a lot of work for me in my Sram Voltron build. She might be useful here too! Flickering Ward also seems much better here in a mono colored deck. :)

You might not have enough enchantments to include this right now but I would also keep in mind Winds of Rath. I have used that many times as a straight one-sided wrath!

This is just a pet card of mine but never underestimate the power of a bowl of Hot Soup! Especially if you are already prioritizing indestructibility, the down side is often negated. 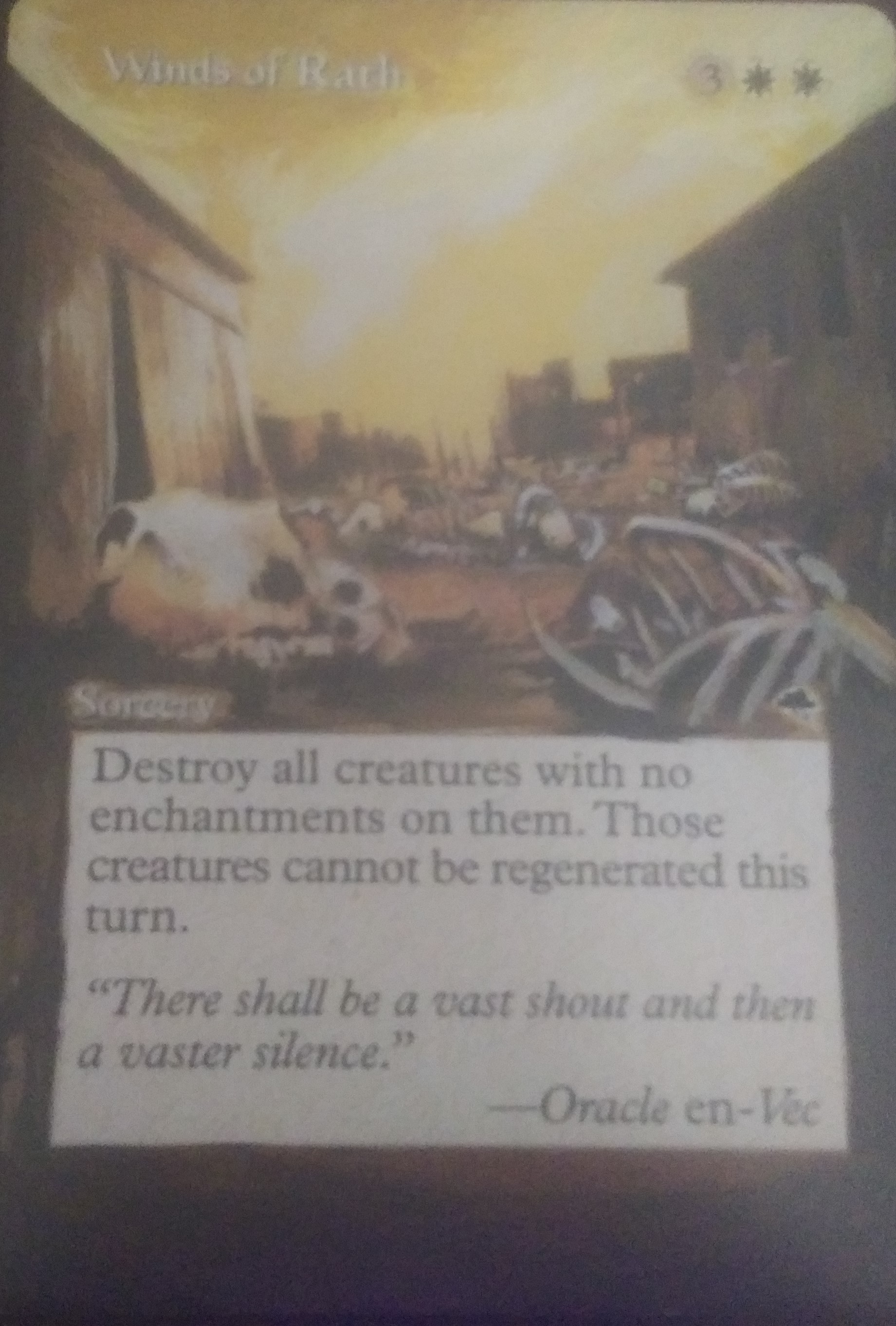