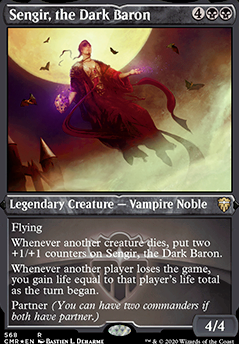 Stay a while and listen. [Everything is better when read in the voice of Deckard Cain]

Baron Sengir is one of the most ruthless and disgusting creatures to ever walk the planes in MTG, using his thirst for power to guide him into manipulating everything and everyone around him into attaining that which he desires.

When I first saw Sengir, the Dark Baron revealed, I couldn't believe what I was seeing, an absolute travesty to the character, mono-black? I was really hoping that he would have been in Grixis colors, just look at his Castle Sengir . While mono black isn't exactly a huge upset for me as I was expecting it, what I wasn't expecting was Partner... In what world would the Baron ever become partners with anyone? He doesn't share power! He rips it away from others and uses it for himself.

I had said, ever since I saw the artwork revealed on an episode of the Command Zone, that I would build the new Sengir deck, no matter what his ability, but I have to say I was very disappointed. So after many weeks of bitching and moaning I decided I am still going to build it.

Sengir, the Dark Baron is just begging to be a voltron/ aristocrat deck, and that is boring AF, and while this is likely the best strategyfor him, it just doesn't interest me. I decided I am going to build the Baron as what I think his character would be like, Grixis and manipulation.

Enter Ludevic, Necro-Alchemist , have you ever seen a card more representing of Dracula's Igor? Ludevic isn't a partner, he is a servant providing to his master that which he can not attain himself, access to blue and red mana. Ludevic, Necro-Alchemist also provides hints of the Dark Baron's diabolical plans, in rewarding those who hurt his enemies, and that is the total strategy of the deck. The Baron's strength comes in pitting his enemies against each other, while he sits back and absorbs the power of their fallen souls. So this deck focuses on a forced combat, board control, and pillow fort.

Command Strategy: The Dark Baron is going to gain his power by forcing his enemies to kill each other, as their creatures die his strength increases, as his opponents perish, the Baron breathes new life. We facilitate this strategy by using the forced attack mechanics from cards like Bident of Thassa , Goblin Spymaster , Maddening Imp , Geode Rager , and Bloodthirsty Blade . I absolutely love the goad mechanic, and I can't wait for more of these cards to get printed! While most of these cards don't force are enemies to attack our opponents we incentive them to do so through Ludevic, Necro-Alchemist , and of course the threat that if they don't attack our opponents we will take their creatures from them with Captivating Vampire , Empress Galina , Memnarch , and Olivia Voldaren . But nothing incentives a person who is being forced into combat to attack someone other than you, then DEATHSTRIKE!

Deathstrike Strategy: First strike and Deathtouch, what can possible be a better pillow fort! No one voluntarily is going to send their creatures at a wall of first strike and deathtouch creatures.

We throw in a little Crawlspace , No Mercy , and Propoganda just to make sure our fort is impenetrable, we don't want to disturb the Baron, he is busy entertaining and hosting other powerful nobles.

I feel the deck has a nice mix of card advantage, ramp, and especially tutors, to make it work, it's obviously not competitive and is meant to be casual and fun. I decided to only add a select group of aristocrats into the deck mainly for the utility, if someone tries to exile one of my creatures, or tries to steal back a creature I took from them like with Homeward Path . Like I said this deck is by no means competitive, I like to consider it optimized jank. I have no problem investing in high value cards for one of my favorite MTG characters.

2nd Game: Won, 3p. Sengir, the Dark Baron swung in to kill P2 with 16 counters and Shadowspear for lethal. Killed P1 with 36/36 vampire token created by Kalitas, Bloodchief of Ghet , that had Deathtouch from Zagras, Thief of Heartbeats and trample from Shadowspear .