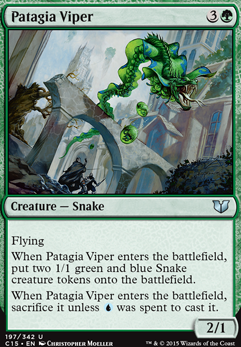 When Patagia Viper enters the battlefield, sacrifice it unless was spent to cast it.

ezuri updated, needs to be thinned out
by BurningD0wn 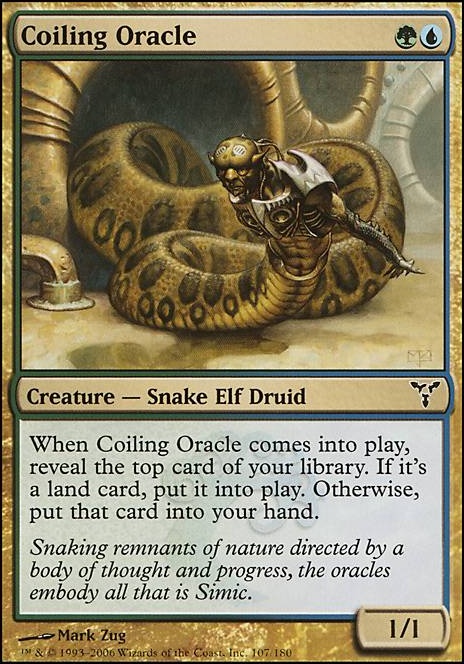 Messere on A green-blue snake deck who â¦

Hi everybody, i'm new in this forum, and my first thread is about my first deck. The idea of this deck is based on Kaminagawa's edition Snakes, who most of them, when inflict damage to a creature, make them TAP and don't UNtap during the opponent's turn, plus using some blu sorcery or instant who can TAP other creatures. The ultimate combo that i have in mind for this deck is to play Shisato, Whispering Hunter , maybe equipped with some Aura or Equipment who give him the protection from abilites or spell, or being unblockable (like Whispersilk Cloack), and then strat attack the opponent, using blue Istant or Sorcery to TAP his creatures (who will not UNtap until Shisato will be able to continue to attack), maybe with Nature's Will in play to also TAP his lands.

The problem is...what type of creatures and spell i need to have, to achieve this result? I've already have this deck, with some snakes who give me mana, like Sakura-Tribe Elder , Coiling Oracle or Orochi Sustainer , some combat snakes like Matsu-Tribe Sniper , Matsu-Tribe Decoy , Sosuke, Son of Seshiro , Seshiro the Anointed , Patagia Viper , Lorescale Coatl or some big snakes like Patron of the Orochi or Hooded Hydra ... but how can i build my deck to work fine? With which type and how many TAP spells?

If you have any suggestions, i'm all listening

Overall, it looks pretty good. I love your inclusion of Ornithopter, there's nothing better than winning a game because of a 0/2 creature.

Because the deck is built heavily around putting counters on things, something like Primal Vigor or Doubling Season could help a lot.

Something that creates a lot of creatures as it enters like Avenger of Zendikar, Hornet Queen, or Patagia Viper can be good for getting a few experience counters at once.

To go along with the deck's low-ish casting costs, As Foretold and Inexorable Tide seem good.

Lifecrafter's Bestiary is usually a good card in green. Bow of Nylea is useful as well.

Awakening Zone gets you a bit of mana and an experience counter on each of your turns if your commander is out. And it pairs nicely with Animation Module.

For land, Dryad Arbor or Khalni Garden could be nice because they give you experience counters, but they can slow your deck down a bit. Same with Llanowar Reborn.

If you need more protection for your creatures, Asceticism and Plaxcaster Frogling can help them survive.

Arachnogenesis could be great if you have you commander out and you opponent is playing agro. Prevent all damage, gut a bunch of creatures, then get a bunch of experience counters. Fungal Sprouting or Cobra Trap can be good for the same reasons minus damage prevention.

I would recommend replacing Triskelion with Walking Ballista. Triskelion might be the better deal for 6 mana, but Walking Ballista is more versatile. You can cast it sooner or later and give it more counters when you have no use for extra mana.

That's about all I can think of. Good luck with commander! And keep in mind that if you're just playing with friends you don't have to worry much about building the best deck in the world. Build a deck that you think will be fun to play.

I feel it may need more Enchantment hate. I would argue in the the form of non-creature spells, such as Beast Within. I play tested this deck against one of mine. I was able to ramp out Overwhelming Splendor turn 5 and your deck was useless. Now, if you don't see yourself playing against Overwhelming Splendor, another creature with a destroy enchant/artifact ETB would be great, for you have a couple ways to bounce. If you were going to do this, I would remove, Patagia Viper, for the first time you bounce it, it dies. Though it does have a potential to net you 5 experience counters, you may be able to find cards with more value. (Such as maybe Eyeless Watcher, if not for hate. It provides ramp, and you have ways to make things unblockable, or give trample, not sure the Flying is a huge leg up.)

I think i use Ohran Viper in a Snow themed deck but i forgot that she's a snake too :P. I considered Patagia Viper too, but i didn't knew what to take out. Maybe i'll take some Sakura-Tribe Scout or Sakura-Tribe Elder, maybe one of each?

and thanks for the support, i'll check your deck too :)

First things first: i know of a player who would approximately like to have a look at this: Snakerush

And now to what i have to say about this: i really like what you've done here. One thing i found to be very important with snakes is to not overload on twodrops. Your numbers look well though. Ohran Viper and Patagia Viper might be useful for you. Besides this, maybe you want to have a look at this: My snake deck (that title took me two weeks...)