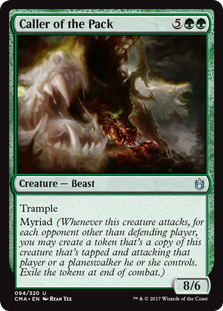 Caller of the Pack

Caller of the Pack occurrence in decks from the last year

Caller of the Pack Discussion

With the expensive price manabase here with many Forest dual lands Nature's Lore is an upgrade for Farseek . Consider replacing Cultivate and Reach with two drop mana rocks: Talisman of Impulse , Talisman of Unity , Talisman of Conviction ? Consider Open the Armory or Stoneforge Mystic ? It's another tutor that can get one of Greaves, Skullclamp, Staff, Boots.

I think Regal Behemoth is a better Mirari's Wake or Zendikar Resurgent with Atla. In fact consider cutting both of these cards for Regal? It's a creature, gives you the monarch (draw) and it has the same land bonus ability. The +1/+1 that Wake gives all your creatures can be detrimental if you're trying to use Skullclamp to sac 0/1 Eggs which is an excellent source of both card draw and cheating creatures onto the battlefield. It's broken, anything that makes this interaction worse I wouldn't include.

How much of a budget do you have?

Some cards off the bat that can be considered:

Now to some cards you can consider to cut:

Rune-Scarred Demon might be the best budget option for reanimation. Anything you bring back from the grave should cost at least 7 mana otherwise it's just better to play the card outright. Your three main concerns for the deck should be stuff to bring back from the grave stuff to bring it back and stuff to put it into the yard. Herald of Anguish Lord of the Void Overseer of the Damned Caller of the Pack are all decent choices

Bark at the Moon

Caller of the Pack, Seasons Past, and Shamanic Revelation

hookedonkronix: Thanks again for the good advice. I do already have an Ohran Viper and a Broodbirth Viper in the deck. I just acquired a Thunderfoot Baloth and am seriously considering it for here. And One with Nature sounds hilariously awesome...for me. I thought about Caller of the Pack, but decided to go with something that had more utility. I like it's beefiness, trample, and myriad, but I wanted more than just a body on the field.