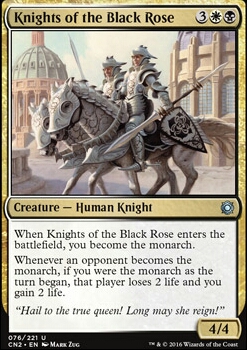 When Knight of the Black Rose enters the battlefield, you become the monarch.

Whenever an opponent becomes the monarch. If you were the monarch as the turn began, that player loses 2 life and you gain 2 life.

Long Live the Queen
by Vorkhar

Knights of the Black Rose Discussion

Thanks for the suggestion LunchBox1211! I actually have a copy of Knights of the Black Rose coming in the mail, but I don't know if I'll use it. I think it may be a little underwhelming at 5 CMC.

Looks like fun! Have you thought about Knights of the Black Rose ?