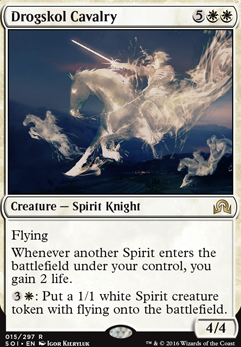 Whenever another Spirit enters the battlefield under your control, you gain 2 life.

: Put a 1/1 white Spirit creature token with flying onto the battlefield. 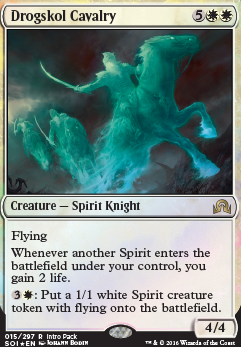 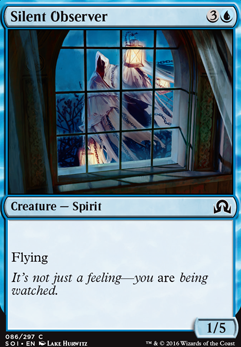 I really like the nastiness going on here, I guess I'll come up with more ideas soon. In the mean time:

Blinking Spirit is a must-include basically.

I Don't think I have really seen a spirit deck before, I am curious as to how it plays out in your meta.

It seems you have a good start on it but there are a few spirits I think worth mentioning that I don't see among the assembled host. As there is never really anything such as to much draw power, Some options in tribe: Drogskol Reaver, Primordial Sage and Sturmgeist. If you are looking for some more life gain options: Drogskol Cavalry and Wall of Reverence. General mayhem: Celestial Kirin. Cryptic Gateway is decent and Fist of Suns might be vital for getting your Myojins into play cheaply (as it casts rather then puts into play).

Also the mana base seems like it could be trouble as many of your creatures are mana intensive in both color and cost, to that end I would recommend adding more ramp into the deck to both increase the mana pool and smooth out colors issues that might arise, probably about four more at least.

xyr0s:
First, thanks for you input and suggestions, Path to Exile will definitely be added, just not sure for what yet (although I am a bit concerned with the ramp up of my opponent, but that shouldn't be too bad).

I suspected this deck was too slow for Modern, which is why I am asking for help. I have a pretty big gap in between my times of play (Unlimited to Fourth Edition, then Tempest and Stronghold, and then random booster boxes bought from 2012 forward, except, I haven't bought any new cards for about 2 years), so I am not aware of many of the options that are out there. Additionally, because the time I played most actively was so long ago, many of the staples of play are not Modern Legal and I'm not sure what replaced them or what the best option for replacement was. Which is why Cancel was in the deck, I knew it was a 3cmc straight up counter, one turn slower than my favorite spell in the game Counterspell; I didn't know what else to choose (going with Mana Leak btw, thank you).

Okay, on this deck, it is not a Azor's Elocutors deck; it is intended to be a deck in the vein of Tempest Deep Freeze. Objectives are to limit what makes it to the battlefield, then lock down what you do allow to the battlefield. Any opportunity where you have a battlefield advantage because of the control aspects, you should be swinging with whatever you have on the field. It really is a control and beatdown deck. Azor's Elocutors is in as an alternate win condition, if you can completely lock down the board with the Eidolon of Rhetoric + Jace, Unraveler of Secrets combination, essentially making it a 3 card combo against decks that can't answer the primary combo. However, this has convinced me walls are the wrong choice for this deck, too passive. So I need some decent low cmc creatures to replace the walls, preferably with some permission or control aspects to them.

Okay, for counterspells, dropping Cancel and picking up Mana Leak. What are your thoughts on Mausoleum Wanderer? I was thinking it doubles as a creature for my deck (since I am sticking with spirits) and gives me a counter. My concern is it is limited to instants and sorceries. I anticipate early game to be facing a lot of creature casting, so it seems of limited value, and isn't a strong creature until pumped up by Drogskol Captain, and if I make it to turn 3 or 4, then even a hard counter like Cancel would be a better choice due to the limits on what it can counter.

Definitely like Cryptic Command; but not sure if it should replace Rewind. I really like Rewind, because if I can force the game late, it is a, qualified, "free" counterspell.

On the lands issue, yeah, in the old days (maybe I'm shackled by my previous experience...lol) it was common practice to run around 1/3 of your deck land, and I still build like that. I don't mind being mana tight. I start getting up to 24-26 lands, like suggested currently, and I notice I flood seemingly way more often. I despise flooding. So yeah, I run tight; I think the curve on this deck may be too high, but the high cmc cards (excluding Jace, Unraveler of Secrets and Eidolon of Rhetoric) are not necessary until later game, while the lower cmc cards are intended to help make it to late game. Telling me "I need to make it 8 turns" is an issue for the deck? That is what I'm trying to make the deck do...drag games out > 8 turns. Also 70% of my deck is <= 3 cmc. I am going to be removing Drogskol Cavalry for Leyline of Sanctity, so that should reduce the curve a bit too. That being said, land tweaking is always the last thing I do, and you may be right, it may need 24-26 lands, or some digging. But that usually comes from play testing for me, not my initial build. I build tight, then loosen up if needed. This allows me to know which cards can be removed from the deck and replaced with lands.

On the walls, I do agree, for different reasons. I'm going to remove them from the deck, for some slightly more aggressive creatures, who hopefully will have some control aspects built into them. I liked the utility both of those walls provide; but they don't allow me to attack when opportunity arises. If you have any ideas for <= 2 cmc creatures that provide some good control utility (preferably without paying something every turn, like Gideon's Lawkeeper, although I do like that card) but still allow me to chip away when opportunity presents itself, I'd really appreciate it. The argument that walls shouldn't be used because removal exists is silly to me though. In that case, non Shroud/Hexproof creatures shouldn't be used because removal exists. A player using removal on my creatures is a part of the game and mostly 1 for 1 trade; this deck shouldn't (if built right) mind 1 for 1 trades in normal game flow. That card and mana could have been used by my opponent to strengthen their board, instead it was used to weaken mine; but this deck will struggle most against opponents that focus on strenghtening their own board quickly. I used to play a modified Tempest Deep Freeze a lot, and that is what this deck is inspired by, and I will tell you, in my previous experience, attacking my board was not the way to win against the deck. Removal spells are the least of my concerns, especially when used on a disposable 2 cmc blocker; unless that next attack takes my life to 0, I don't mind losing those early creatures and delaying, whether it is delaying an attack hitting me, or delaying my opponent playing a more meaningful spell because they used removal on essentially a chump blocker. I hope I explained this correctly; not sure if I did. Either way, walls are out, and I'm going to put in more aggressive creatures.

As for the Card Advantage discussion; yeah, I could use some for sure. I like Sky Hussar, that could be useful. If I have a positive board state (which can often happen due to the board control spells in the deck) I could definitely use that card to draw. That being said, I'd prefer if I could get some extra draws on some control spells. Any ideas?

Finally, thanks again for your input. Definitely a lot to think about and some changes to be made.

I considered cards like Ghostly Prison for a bit, but thought between counterspells and battlefield control cards (I had Counterspell, Power Sink, Oblivion Ring and Pacifism in the deck when I decided not to do costs to attack, and I still have similar cards, although the counters are slower) I figured keeping the battlefield under control would be handled by limiting what makes it to the battlefield or chanting what does make it to the battlefield to make it essentially useless. I definitely like this style of card though for swarm decks, perhaps a good sideboard card. Since the intent of this deck is to slow the game down and make it to the late game, I kind of figured its draw back would mean, late game I'd lose that advantage and some of the control. Not sure if that is making sense.

I actually have Aegis of the Gods in my current build of this (I don't own all the cards yet for the deck you are helping me build, I'm doing this so I know what cards to buy); the only issue I have with it against a burn deck (my other favorite Archetype), is Aegis of the Gods doesn't hold up against burn at all; it buys 1 spell (if I could Aegis of the Gods and do something like Dense Foliage, then I'd be more inclined to use Aegis of the Gods in the final version). Leyline of Sanctity seems to be the better choice. I'm just not sure what to replace to add it. I'm already running mana tight and I'd have to remove something I that I think makes the deck work, to add it. Any suggestions? Actually, I could probably remove Drogskol Cavalry for them; those are only valuable if I have control and get them late game; but if I have control, my other spirits and Godhead of Awe should be able to do the beatdown. What do you think?

And yeah, Disenchant will definitely be in the sideboard. Great suggestion. I can't believe i forgot about it.