Other creatures you control have melee. (If a creature has multiple instances of melee, each triggers separately.)

Adriana, Captain of the Guard occurrence in decks from the last year 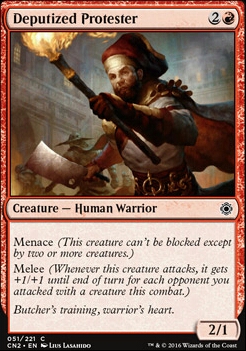 Adriana, Captain of the Guard Discussion

Thank you nicktibe I will put Adriana, Captain of the Guard on the slot. I let this one pass.

With how explosive I think the deck can be I can see playing Chance for Glory in it since with all the triggers she can get it can be insane.

Also Syr Alin, the Lion's Claw and Adriana, Captain of the Guard I think could be a good creatures to flip into since they will give your board a boost in power on attack as well as Darien, King of Kjeldor for being a threat that needs to be taken down before anyone swings on the crack back with her on board.