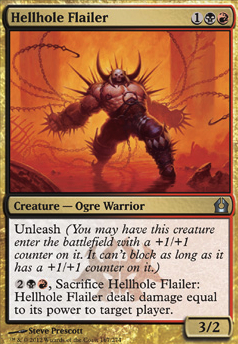 hellhole aka the living cannon ball
by proterran98

bushido_man96 Thanks for the suggestions. I really like Spear Spewer , Thermo-Alchemist , Palace Siege , and Retreat to Hagra . Palace siege is the only higher CMC card of that bunch. Typically I want to try and keep the mana cost on the lower end, and stick to effects that would damage all opponents, so these fit that nicely. My goal is to keep in as many tutors as possible, so I'm thinking I should probably replace some of the mismatched cards like Hellhole Flailer and Hound of Griselbrand , unless do you think there's better replacements?

Scion of Primal Hunter on

IlGuale Hi there, unfortunately my three slot are full l, I tend to keep my mana curve slim and tight. I can't renounce Hellhole Flailer. He is one of my main beater and sac meat!

Thanks for your appreciation!

Looking to make my super-budget red/black aggro a lot better now that I have some cash to invest in it. Where should i start?

Thanks for any/all suggestions!

From my Marchesa deck:

Blood Tyrant is great if it can survive. Dark Impostor is really scary if you can exile a few commanders. Drana, Liberator of Malakir is pretty scary. Hellhole Flailer is decent removal. Malakir Cullblade HOLY SHIT that got big fast. Marchesa's Smuggler can come out of nowhere. Ob Nixilis, the Fallen is really, really big. Fervor doesn't seem that great, but it can destroy removal-centric control decks. Rhystic Study is SO MUCH DRAAAW. Nicol Bolas, Planeswalker is easily the best artifact/enchantment removal in Grixis. Blasphemous Act is awesome when death is impermanent. Killing Wave is in the same boat. Rakdos's Return ANNIHILATES combo players. Use Sudden Demise on the G or W player, or even on your guys. Bident of Thassa is just awesome.

And there's still an entire Meren deck to cover.

Attrition. Champion of Stray Souls is good for those who fall through the cracks or just as a bluff. 'Even if you DO finally kill my guy he'll just come back'. Corpse Traders against combo players. Disciple of Bolas is good draw and it can be a TON. Slum Reaper is good, and wildly asymmetrical. Stronghold Assassin, in your build, is recursive Attrition. Vampiric Rites is really good early game. Westvale Abbey  Flip is stupid difficult to remove, starting as a land and then an indestructible creature.

And finally, my favorite one of all: Vindictive Lich. I normally use it as a political piece, letting people pick the fate that seems least bad. Through that, I learn what their unique kryptonite is. I then use that once I am strong enough that I don't need any alliances.

I would say that the rakdos list is somewhat weak Hellhole Flailer & Rakdos Cackler have strictly better versions, if you intend to use them as beaters (like Goblin Guide) - you could of course abuse them with something like Rage Forger, but in the end the deck just doesn't seem to have a clear plan, at least to me.

If you are willing to add some more recursive creatures like Gravecrawler (as black has plenty such options), you could build an aristocrats deck with 4x Viscera Seer + 2x other sacrifice outlet & 4x Blood Artist & 4x Zulaport Cutthroat
And then alter it slowly into the deck that was called "next level abzan".
In the maintime (due to the life leech) you can use spells like Imp's Mischief to protect your stuff - since without single target removal the deck is hard to deal with to say the least.
Maybe some number of Duress to combat both removal and planeswalkers.
...the options are endless.
(and there are nice mass reanimation spells, like Immortal Servitude)

However i would try to stay clear of Smallpox as it works best in WB planeswalker decks - and stuff like Liliana of the Veil is not cheap.
And you definietly should not play Pack Rat in such a build, as both compete for the same resources, cards in your hand.
The rat is best in Life from the Loam + Squee, Goblin Nabob builds - at least in my opinion, where its played alongside stuff like Zombie Infestation & Seismic Assault

Max out to 4 of each of Rakdos Cackler, Rakdos Shred-Freak, Hellhole Flailer, & Spike Jester. Get rid of Rakdos, Lord of Riots, Exava, Rakdos Blood Witch, & Dragonlord Kolaghan. Their mana cost is too high for the type of deck you are building. I would add 4 Lightning Bolt, 4 Blightning, & 4 Duress. There are a lot more cards that I could suggest, but they would increase the costs significantly. Check out my deck for some ideas: Devil's Revenge.

Hey Vlasiax I am definitely going to get rid of Rakdos, Lord of Riots and Rakdos Shred-Freak. I will be adding Hellspark Elemental once I find 4 of them. Goblin Deathraiders also looks like a good card to add to this deck. I will have to look into that as well. Hellhole Flailer is the card that I have been using instead of Rakdos Shred-Freak. My sideboard is completely different than what is on this list. I am going to have to update this deck to match what I have in person. Thanks for the help!!