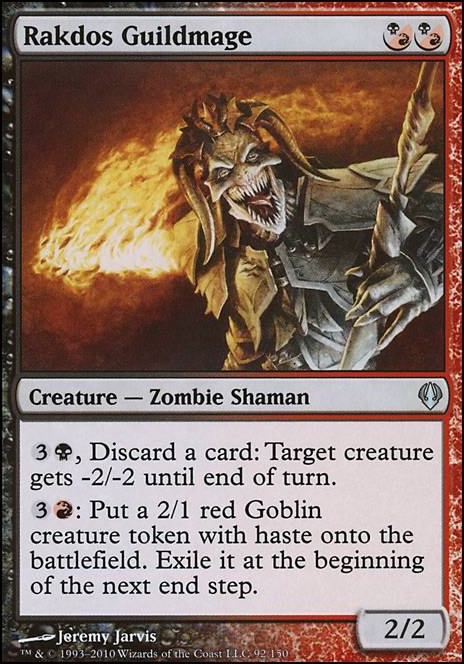 : Create a 2/1 red Goblin creature token with haste. Exile it at the beginning of the next end step. 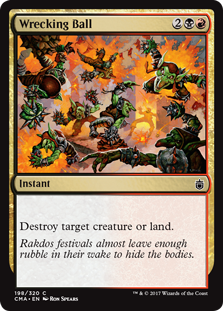 Vast Army of Heaven and Hell
by Sscars

Mogis, God of Slaughter
by Oleboof 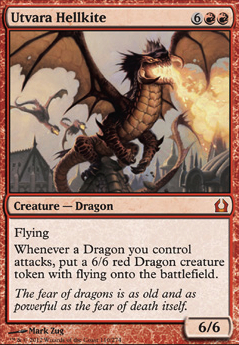 Thanks so much, that's really helpful. Though after testing a bit I don't think the Fateful Showdown is super necessary, since the only thing that could stop an Emrakul or Rakdos Guildmage is Ensnaring Bridge, and there's already an Echoing Truth in there to deal with it... then again, it's a super spicy way to win and easier to win with than Blue Sun's Zenith, so there's that. Then AGAIN, Blue Sun's Zenith allows the deck to win at instant speed, which could be important in certain scenarios... idk

I really like the idea too. It's so satisfying to pull off. There are some problems with the deck though: it's hard to find all three combo pieces and go off through removal in a timely fashion and a bunch of the creatures (Guildmages and the Mistmeadow Witch) rely on having a Training Grounds out to stall the game well enough to get to the combo... they're really slow and kinda useless without one. They're fun and on-theme, though, and I guess that's all that matters in a janky deck.

Now that I look back at those medium-sized walls of text, I realize that I was rambling a bit. sry about that. also, thanks for commenting, I'm really excited about this idea and I hope more people show up to help nurture it.

Haha glad to see my decklist has inspired you! :)

Man Nissa is a beast, she does so many things so I don't know if she can truly be replaced.But Borderland Ranger does this same thing as the flip side, Frontier Guide can search up lands repeatedly, something like Blood Scrivener might be able to draw you into some extra cards- but probably the best budget replacements I can think of might be Jade Mage and Yavimaya Elder. Jade Mage lets you spit out little saprolings for incremental advantage over the long game. If you're more concerned about the ramp and draw parts, the Elder is great. And although Rakdos Guildmage does vastly different things, he's still pretty amazing.

Basically what you are looking for in the Nissa slot is a solid value creature that generates some sort of card advantage.

Hey UnleashedHavok, no problem, I dig your deck, too! I agree, it is really different from mine, lol. I've definitely considered those two before, and though I won't include Bone Shredder due to my anti-Phyrexian flavor preferences, Stingscourger seems like a powerful and fun way to control the board. I'll definitely see if I can make a spot for it!

I've only played this deck once, and I didn't last too long, haha, but I feel like there's a decent amount of control in this deck. For creature removal, for instance, I might use Rakdos Guildmage, High Priest of Penance, Spear of Heliod, Nekrataal, King Macar, the Gold-Cursed, Triad of Fates, Brutal Hordechief, Warstorm Surge, or Solar Tide. Not exactly removal, but Grenzo, Havoc Raiser and Citadel Siege can also prevent me from being attacked by certain creatures. Thoughts about using these as creature removal?