The Great Machine of Evolution

The Machine Orthodoxy's truth is as follows:

Your opponents are the true manifestation of the Not-Whole: they are the weak and misguided who desperately cling to their heretical imperfection of embracing flesh. If you wish to spread the glory of Phyrexia and purge the weakness out of your opponents then this is the deck and more importantly - Commander for you. Atraxa is a force to be reckoned with - possessing enough keywords to overshadow most creatures, but her true strength lies in her last keyword: Proliferate. This ability plays into the central themes of the deck which incorporates counters to bolster the power of your own forces or weaken those of your opponents. The inclusion of a "Soft Lock" sub-theme utilizes enchantments and artifacts with Fading counters alongside New Phyrexia's Praetors to help control the battlefield and speed of play while your main wincon - Infect - brings your opponents closer to the sublime truth of Compleation.

This deck is an example of an "ideal" (as in monetary cost is not an issue, only the most efficient cards allowed - within context) Phyrexian tribal Atraxa Infect deck. Infect counters alone cannot win games - the inclusion of +1/+1 counters, "stax-like" cards that remove or detain creatures, lands and resources are vital to overcoming the political and mechanical difficulties unique to the Infect wincon. For flavor, the deck includes each Praetor that had an active hand in Atraxa's creation. But the Preators' inclusion is more than just a whim - each one contributes to limiting opponent resources while bolstering our own - contributing to a Soft Lock (See Slang: Lockdown) on the board.

Just so it's clear - you only need 10 poison counters on an opponent for them to reach compleation - (See rule 104.3d). Infect damage cannot be healed or transferred - Phyrexia's touch is nearly impossible to remove. There is however, a big but to consider - playing such a unique and arguably strong wincon as Infect will place the pilot of this deck at a political disadvantage for most games. Infect/Poison counters are typically viewed (from my own personal experience) as a high priority for opponents to address. Sometimes the whole table pitches in to completely dismantle your boardstate and keep you from playing magic. To try and counteract this, it is always important to set the expectation. With this deck in mind, announce to your opponents the themes that are core to its function before the game begins. For opponents who wish to not experience the wonders that Phyrexia could bring them - give them a chance to express their opinion (and disgusting embrace of flesh).

On a good draw, the deck can consistently threaten to win between turns 4-6 in a 4 player pod. According to the following the chart listed in The Command Zone podcast's How to Determine your deck's Power Level that would place this deck at a relatively high level of power. Not quite cEDH, but definitely at the stronger end of the spectrum.

There are no infinite combos in this deck. Instead, it functions with alot of interactions that build off of each other using Proliferate as the primary enabler.

A word of advice to my fellow compleated players who wield Infect (but mostly this is a reminder to myself): Always remember to start a game of commander with the turn 0 talk (basically ask if everyone is cool with playing against your deck) to avoid (or at least delay) getting hated out of the game early on. From my own personal experience infect tends to be at a political disadvantage (see Sliver Hate). So never try to take it personally when the board collectively obliterates your board. Try to be more Zangief (while sharing his philosophy at Bad-Anon in Wreck-It Ralph) in your thinking:

"Then I have moment of clarity... if Zangief is good guy, who will crush man's skull like sparrow's eggs between thighs? And I say, Zangief you are bad guy, but this does not mean you are *bad* guy."

This deck is at it's most Vorthos when you find yourself playing archenemy - you aren't merely piloting New Phyrexia, you are New Phyrexia. Just remember the turn 0 talk, and remember to have fun.

Blessings of Phyrexia upon you dear reader. Now, I donât know about you but I was definitely holding my breath for a new Praetor showing up in Kamigawa: Neon Dynasty. I heard rumors last year that another Praetor would show - specifically a Jin-Gitaxias, Reality Hacker. What we received however, met my expectations (being an absolute powerhouse) and fortunately synergizes very well with this deck: 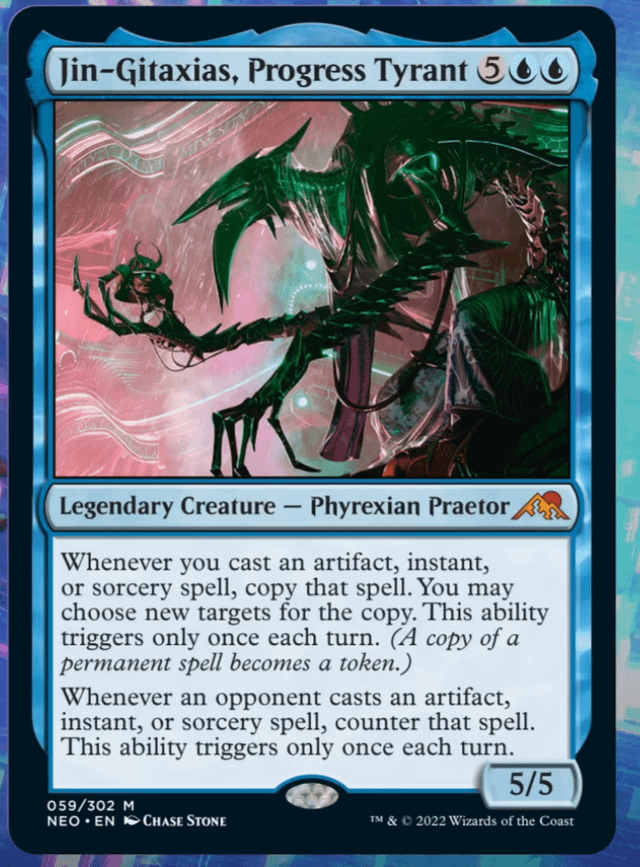 There he is, the Progress Tyrant in all his glory. What card slot will he be taking? Well, he will be taking the slot of his previous instance â Jin-Gitaxias, Core Augur. The previously mentioned just seems like a âwin-moreâ card in this deck as I always end up hard casting it at the end of an opponentâs turn to attempt a soft-lock mid to late game and/or attempt to refill my grip to find answers. If Iâm spending mana on a single spell then I should be attempting to wrap up the game. Jin-Gitaxias, Core Augur is a generic blue "good stuff" card that can go in any blue deck.

Progress Tyrant on the other hand has multiple advantages over its predecessor: a lower CMC (from to ) means itll hit the board sooner, which is just icing. The cake itself is simply glistening oil delicious. The first ability:

âWhenever you cast an artifact, instant, or sorcery spell, copy that spell. You may choose new targets for the copy. This ability triggers only once per turnâ can be wildly abusive when I cast or double proliferate effects ala Tezzeret's Gambit, Sword of Truth and Justice, Contagion Engine, and speaking of artifacts whatâs better than Blightsteel Colossus? Two. Two Blightsteel Colossi. Of course thereâs the doubling of tutor effects, targeted removal, etc. It is a bit of a shame that the ability only triggers once each turn, but still itâs incredibly powerful.

As for the 2nd ability, and honestly my favorite: âWhenever an opponent casts an artifact, instant, or sorcery spell, counter that spell. This ability triggers only once each turnâ. Sweet Yawgmoth that is oppressive. Not only does this card provide protection for itself (as the opponent will have to sacrifice another instant sorcery or artifact to cast the spell they want), but it also disrupts theirâ¦ahemâ¦progress on each of their turns. Glorious.

Last but not least, all of these wonderful effects are on a stacked 5/5 body. I honestly couldnât ask for a better design for a new Jin-Gitaxias, and I for one will be acquiring a copy day 1 (In Phyrexian and in foil, of course.)

But wait, thereâs more. This set provided me a pleasant surprise in the form of Tamiyo, Compleated Sage:

This was a move I honestly didnât see coming â bravo, Wizards. On principle alone I will be acquiring a Phyrexian copy of the card, but more importantly will it have a place in the deck? No. Not it wonât. Why? Well for essentially mana a planeswalker that barely protects itself isnât remarkable. Her first ability is so-so, being able to tap down an important creature is decent. Her second ability is very conditional â if I donât have a graveyard or havenât filled it with creatures yet then itâs useless. Her ultimate gave me pause, as itâs a strictly better Urza's Incubator which is fire. The problem is the hoops Iâd have to jump through â either I cast her for her full CMC of and hope he survives 1 or 2 turns, hope I have Vorinclex, Monstrous Raider on the field first, or hope I can get off two proliferation triggers the turn she enters the battlefield afterIâve paid her full cost. Honestly, itâs too much of a hassle investing so many resources for arguably so little pay off.

Additionally, I just donât like the idea of including a planeswalker because I donât want to build a superfriends deck. I find the build very generic as one Atraxa superfriends deck plays like any other. Also, superfriends is completely flavorless â it makes no sense for Atraxa to lead the Gatewatch and an assortment of likely anti-phyrexia heroes into battle. Just a hot take of my personal opinion â Iâm not trying to knock on anyone elseâs deck or anything - end rant. Is anyone else excited for these two cards? Are there any cards that Iâve missed? Please let me know in the comments. Oh, and thanks for reading.