It's that time of the year again, where Wizards reveals hints and spoilers about their next big sets - in this case, MH2 and the summer set replacing this year's Core Set - DND Adventures in the Forgotten Realms. As an avid DND player, DM and fan myself, the latter is especially exciting - most of all, since I've been telling my friends that they HAVE to include some iconic, classic monsters and gods in the set to truly show off in Dungeons and Dragons style. Among those are two of the most powerful dragon deities in existence (though they may still pale in comparison to other gods, are still extremely strong in their own ways): Bahamut and Tiamat. This mad the spoiler all the more exciting, as the single mythic showcased was the five-headed dragon queen herself, Tiamat! 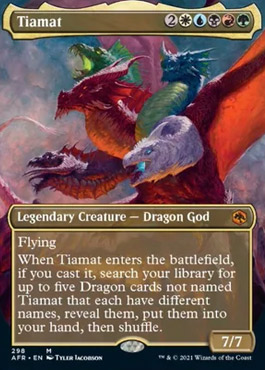 And what a beauty she is! Yes, another 5C mythic dragon, much like The Ur-Dragon and Scion of the Ur-Dragon , but certainly a bit different in functionality: for 7 mana (rainbow + 2 colorless), we get a 7/7 flier with an ability that's essentially an extensive tutor on a stick. "Search you library for five dragons not named Tiamat that have different names, reveal them, put them into your hand, then shuffle." It's not the most amazing ability for the CMC, especially seeing as Scion can do this at instant speed to copy one, and Ur Dragon can draw out cards each combat (plus offers cost reduction). HOWEVER, considering she's a Standard Legal dragon that has an ETB mass tutor ability, I think it's understandable that a little balancing was necessary...though a single tutor and 5 keywords for the cost might have been more flavorful, imo.

Despite being about average and somewhat underwhelming for what her name might imply, Tiamat can still serve as a potent Commander in the right deck! Naturally, how else would we compose a deck but by a classic, self-explanatory Dragon Tribal shell, with an emphasis in making Tiamat our primary tutor for all our threats, while playing cards such as Quicksilver Amulet and Sneak Attack that let us profit from having big dragons in hand often. It's still a basic outline of a deck, so it'll certainly be updated as new cards are revealed!

Any recommendations, as always are appreciated, and +1 if you too wish to join the ranks of the dragon goddess of the Nine Hells!