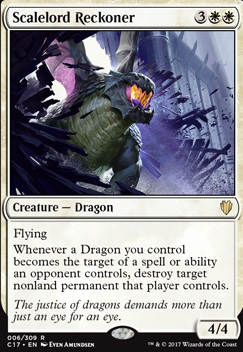 Whenever a Dragon you control becomes the target of a spell or ability an opponent controls, destroy target nonland permanent that player controls.

What is it? Dragons?!
by flytyer97 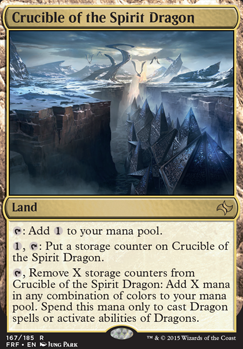 Thanks you! That was some great advice!

I'll implement some of it since I'm trying to stay more in the red section of colours, which, especially in commander, isn't that great. I know. But it just goes so well with the more red theme of this deck..

And except that little bit of white because Scalelord Reckoner is just flipping awesome!

But I'm trying to get that Skyline Despot one day because not only goes it well with the strategy of the deck, but I too think it's a great card. And the monarch mechanic is just fun in multiplayer games!

I'll be removing the gates strategy because you're absolutely right that it's slowing the deck down just too much.

I really appreciate the advice! Thanks again!