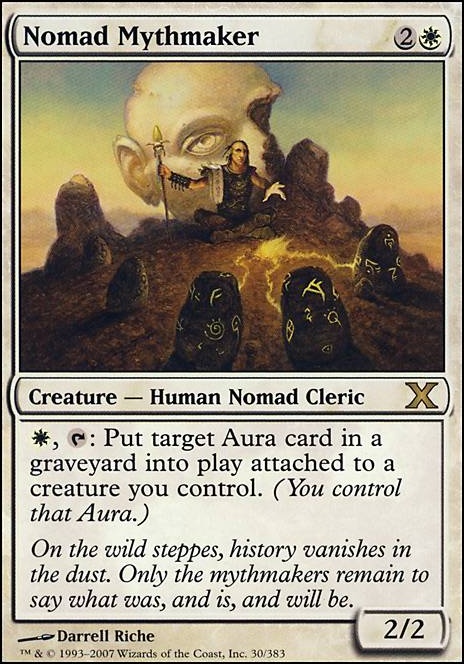 , : Put target Aura card in a graveyard into play attached to a creature you control. (You control that Aura.)

Nomad Mythmaker occurrence in decks from the last year

Siona, the Exalted Champion
by super1up

Siona, Enchantress of Themyscira
by kalfred16

Siona, Captain Enchantress of the Amazon
by butter83

So, I have just learnt of the existence of Nomad Mythmaker , and it seems ample for a strategy such as this.

Okay, this list will probably be long so I'll see if I can break it up.

Kor Spiritdancer - same thing as above

Sphinx's Revelation and other x draw spells like Pull from Tomorrow , or Read the Runes

Starfield Mystic - not crazy about this one, but it does reduce the cost of your enchantments when you have to cast them.

Hero of Iroas - same as above

Traumatize fast, ableit expensive, way to dump a ton of enchantments into your graveyard for Bruna

Winds of Rath - self explanatory

Single Combat - same as above

Hedron Archive - ramp that turns into card draw if needed

Tons of tons of cards tutor enchantments, so consider those as well.

No Shield of the Oversoul ? Hexproof is all well and good, but I think the more ways you can get to protect Uril from boardwipes, the better.

Since auras themselves are often vulnerable, you might appreciate Monk Idealist and Nomad Mythmaker as ways to recycle lost goodies. Kor Spiritdancer , Verduran Enchantress , Mesa Enchantress and Eidolon of Blossoms are likewise ways to help combat card disadvantage from auras - or even earn card advantage from them, if you're lucky!

If youâre gonna Traumatize yourself you might also want to add Open the Vaults or Replenish if you can afford it. Bruna does it herself but in the event they deny you access to her itâs good to have a plan B Retether is also an option

Nomad Mythmaker is also good recursion on his own.

Spellseeker if you want another tutor

Other enchantments to consider maybe are Celestial Mantle , Daybreak Coronet , Empyrial Armor . Iâm sure Iâll think of more as I brainstorm but thatâs a start!

Gift of Immortality is a better False Demise but I would recommend running both to circumvent commander tax.

Attunement is kind of a repeatable filter engine. I think the deck would operate quite well with a Mesmeric Orb also fueling the grave, and then take advantage of the low creature presence with cards like Honor the Fallen for graveyard hate.

Sram, Senior Artificer, Mesa Enchantress, and Kor Spiritdancer would be great includes to always keep you hand topped up.

Nomad Mythmaker and Retether are great grave recursion plans that don't include your commander or Replenish and it's absurd price tag..

Alright, so a couple things jump out; foremost, Cloudcrest Lake is really, really bad. I would replace it with Arcane Sanctum. Actually, with such a low curve, you could even drop down to 37 lands, dropping a basic land.

With the freed up slot, I would suggest running another wrath, or piece of spot removal. The following are staples: Utter End, Anguished Unmaking, Path to Exile, and Day of Judgment or Merciless Eviction. Cleansing Nova is a sweet, new card as well. However, for your theme, Seal of Doom may be more fitting.

Seal of Doom and Seal of Cleansing become even better with some recursion, which is markedly absent. I can suggest, at least, Sun Titan and Auramancer.

While only relevant to auras, Bruna, Light of Alabaster, Nomad Mythmaker, and Retether are great.

Additionally, you could run Phyresis if you're feeling degenerate.

Concerning the mana base, you could run fewer Islands for more Plains. Of course, the deck would really appreciate more premium dual lands, but I understand they're expensive and not particularly exciting purchases.

Other than those points, the deck has a solid strategy, and should be frustrating to play against. Good job.