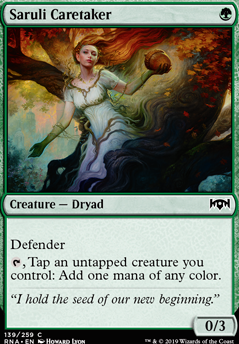 Kalamax Tap Your Own Commander For Fun and Profit
by KaraZorEl

Hey, looks good, nice start. Is this one of your first Commander decks you've made? Really nice pull on the IMA packs especially since you only bought two packs and got the best/most valuable card in the whole set :)

Arcades can benefit a lot from creatures who have defender who can make ramp. These help to make mana to be able to play Arcades faster which helps your overall deck because you want Arcades on the battlefield before you can really get going in the game. If you draw them when you don't need ramp then that's fine because they still draw you a card because they have defender.

Battlement and Guardian can make a lot of ramp because they both care about how many creatures with defender you control. As you play more defender creatures the better their ramp becomes. Either one can for instance trigger a lot of activations for Assault Formation .

Wall of Blossoms is good, it's a green Wall of Omens . Wall of Denial and Geist of the Archives are three drop flying defender creatures and Denial is among the best Walls in Commander. Jeskai Barricade has flash and it can bounce another creature with defender back to your hand so you can play it again and draw again with Arcades.

Reveillark is good reanimation with Walls since they have 0 power. Lark also combos with Barricade for lots of reanimation since Lark triggers when it leaves the battlefield this includes bouncing it with Barricade. Arcades cares about when a defender creature ETB (enters the battlefield) therefore if you reanimate defender creatures you get to draw for each one that enters. Brave the Sands is good with Walls, vigilance with Arcades lets Walls attack and also defend.

Budget lands ($4 or less each) to consider adding:

Soul of the Tokens

From the sound of your meta, there seems to be a lot of group card draw going on. Make sure to overload on ramp, so you can play the extra cards you draw. Loam Dryad and Saruli Caretaker could be decent turn-1 plays in this deck, since you can tap Emmara the turn she comes down. Wirewood Lodge could also be cool. For low-cmc card draw, I would check out Mask of Memory and Selvala, Explorer Returned for your build. I would also skim the EDHREC page for Emmara.