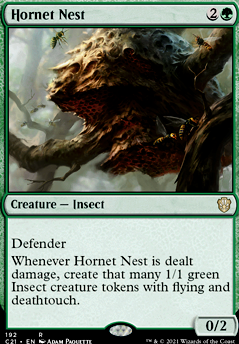 Whenever Hornet Nest is dealt damage, create that many 1/1 green Insect creature tokens with flying and deathtouch. (Any amount of damage a creature with deathtouch deals to a creature is enough to destroy it.)

Iâd suggest Primal Might is a strictly better version of Prey Upon.

Also, it feels like youâre very all-in on the fight theme - have you considered Hornet Nest as a secondary fight-profiting creature?

Ended up picking up the cards for this deck and your The Thing deck. Creepy crawlies deck with a little (maybe more than a little) help from others was able to best a Sliver deck which I am mightily pleased by :D I subbed Hornet Nest for Grist, the Hunger Tide and the best game I had with it so far is with Grist out. What would you sub for the rest of the maybeboard? Pretty fun deck though as is with it being on theme and budget friendly, I told the table after the Sliver game it was only 60 bucks and they wowed so I think you're doing some good stuff with these decks :)

Ryotenchi Cheers. Vivien, Champion of the Wilds does seem like an interesting option if I do end up trying to force bringing Hornet Nest back, though I think that build would end up looking very different to this one (i'd want more useful interaction with Vivien and the Nest in general), so possibly another deck entirely. At the moment I'm enjoyed the typical Rock build with the added Obliterator spice, it's done pretty well at my local, and has mostly good matchups.

My biggest thing at the moment is making time for this deck to figure out what changes I need to make to it with the big meta changeup from MH2. I'm still slowly getting my other decks fine-tuned, so haven't had much time to come back to this one yet. I suspect I don't need to change it too much other than have more turn-1 ways to stop the pesky Monkey from taking over.

free-kolja some replies to your bullet-points. I've also made a list for comparison.

Dealing with non-creature decks better is going to be really hard in a format without sideboards, especially being a combo deck that has to be aiming to win before its beaten down. I have some thoughts, though you're probably not going to like them. It involves changing the deck quite a bit. Below I have a list i've just spun up, which utilizes Karn, the Great Creator . That card will let you fetch up Stuffy Doll to do your combo whenever you need to, but also fetch up whatever hate cards you need at the time (i'm thinking Wurmcoil Engine , Walking Ballista , Ratchet Bomb , Ensnaring Bridge , etc.). Now, obviously i'm not suggesting you change your list to whatever nonsense i've brewed up below, but hopefully it gives you some thoughts for consideration.

The above, as an example, gives you a relatively low bad-draw count. Karn, the Great Creator means you don't have to run Basilisk Collar mainboard, but can still get this card if needed for Brash Taunter . He can also get your combo via Stuffy Doll , and lets you grab specific answers for your opponents decks, so you don't need mainboard Return to Nature . The ramp package changed slightly to allow for a much more explosive path to 4 mana (you can easily have 5 mana to play with turn 2), which allows you to run these higher cmc cards, but also keep the land count low.

zapyourtumor yea Brain_Maggot is for sure a better sideboard option than Thoughtseize . I thought about Hornet Nest against aggro but i thing that matchup wont bei the worst so i put stuff in against control and midrange :P I cant wait to playtest it tho. Thanks for the suggestions! And yea the delver route would Change the Deck too much as i would have to Focus more on instant and sorcery spells.