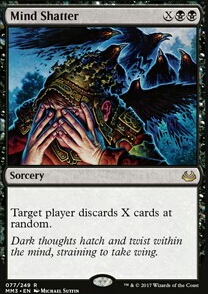 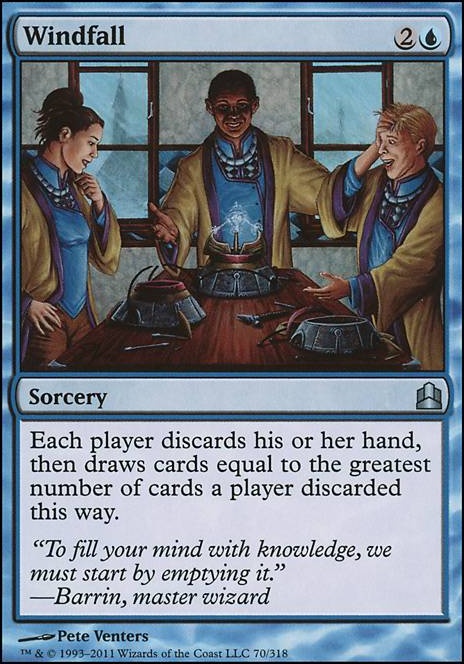 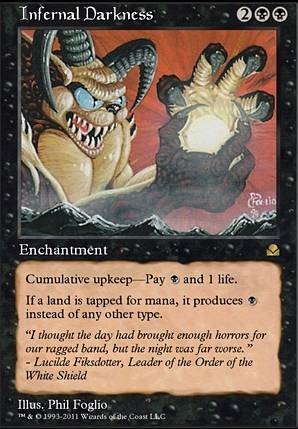 Mill But Actually Voltron
by DougCrab

Mind Shatter and Black Cat are also something to consider.

Shrieking Affliction and The Rack are what defines this archetype "8-Rack" and they are staples as 4-ofs for a good reason.

I love seeing discard decks. I run a Nebuchadnezzar discard deck, I recommend checking it out if ya want some ideas.

You are missing some of the stronger discard sorcery spells. Mind Twist and the weaker Mind Shatter are very powerful sorcery that can force your opponents to just go top decking, plus with your commander it becomes make target opponent top deck and get X 1/1 soldiers. I run both in Nebuchadnezzar because its a nice gun to have against combo players or fragile decks that cant handle losing resources. Arterial Flow is another good sorcery disacrd spell cause it forces all your opponents to discard 2 cards, unfortunately it is there choice and not yours or random. However two cards can be a lot, in a 4 pod game you manage to get 6 1/1s and discard 6 cards for 3 mana. Hymn to Tourach is really brutal because it takes out 2 cards at RANDOM, random discard can really mess with people because it gives the chance of taking out something really powerful vs giving them a choice and they discard 2 lands. I then recommend at least one 1 mana discard spell because they let you see your opponents hand and you get to pick what gets discarded. They are small power but getting knowledge is really valuable in a discard deck because it lets you know who is a big threat and who you should be trying to get to top decking first.

For enchantments you are missing two of the most powerful discard engines, Bottomless Pit and Oppression . I do understand that both these cards hurt you however they are so powerful that the little negative of hurting you can be ignored. Making everybody discard 1 card at random at their upkeeps can be very deadly, you get a token each upkeep(except yours) and you can ideally stop people from getting combos or using powerful cards. Then oppression is really nice cause it punishes spell slinging decks or decks that try to go greedy and cast a lot of stuff. Both these enchantments make it a lot easier to get people to top deck.

For creatures, I recommend checking out some specters( I run a lot of the good ones in my nebu deck). Specter are typically 3 to 4 mana creatures that just force people to discard a card when they deal combat damage. Solid flyers and helps you get people to top deck and produce tokens.

Now for some cool synergy, I recommend Sepulchral Primordial and Reanimate . Because you are putting all of your opponents cards in their graveyard doesnt mean they have to go to waste. With primordial you get a 5/4 intimate creature for 7 mana + 3 creatures of your choice from your opponents graveyards ( I assume 4 man game). Reanimate is nice because you can either bring back one of your creatures or take that really strong creature you forced your opponent to discard early game.

I hope these suggestions help.

I run a black/blue discard deck, Nebuchadnezzar is the commander. I recommend cards like Oppression and Bottomless Pit. Even though they hurt you, they are too powerful to pass up in my opinion. In essence they will be top decking a lot faster with those enchantments on the field. I also run in my discard deck, Reanimate, Necromancy, and Animate Dead as a way to steal other players powerful creatures that they ended up discarding. Sepulchral Primordial is also a wonderful big guy to run in a discard deck. He is pretty powerful by himself but he steals multiple creatures for you. You also should consider the most powerful discard card in the game, Mind Twist. I also run its weaker version too, Mind Shatter. Also Liliana's Specter is pretty nice, 3 mana causes all your opponents to discard one card. I recommend checking out my Nebuchadnezzar deck for my ideas, discard and graveyard decks are my favorite stuff.

Overall, your deck looks like a lot of fun and I hope you cause mayhem in your games.