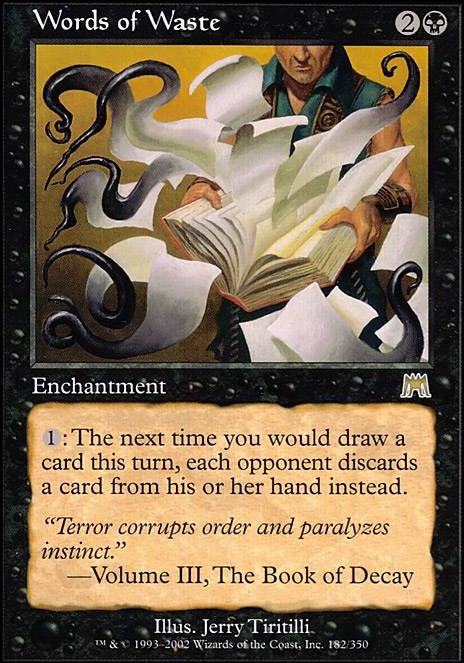 (1): The next time you would draw a card this turn, each opponent discards a card instead.

Nekusar EDH Cards for Everyone
by kei1 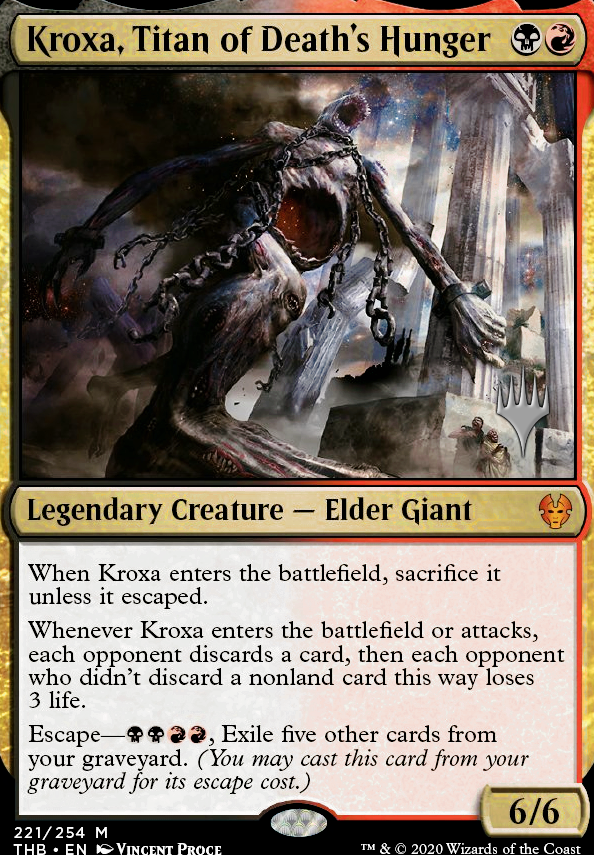 Hey jaymc1130, thank you for your input!! I agree that Geth's Grimoire is very effective with Words of Waste. I initially questioned whether to include the Grimoire because of its cost, but your explanation sealed the deal for me.

Before I can answer your question in detail, I need to test the deck out more. I made several changes as suggested by abby315 and I think the deck is stronger now. I have encountered a lot of graveyard hate recently, and most of the other Black, Red, and/or Green discard-oriented decks I have come across use reanimation or depend on the graveyard in some way. I am attempting a different strategy with this deck to mitigate this weakness. Library of Leng is especially useful because it allows you to protect your discarded cards from Planar Void, etc. and draw them back at will with Necropotence.

Abzan is an interesting color combination for discard I havenât explored before. I like your list and I found the comments very informative as well. While I agree with the analysis on your deck page regarding mono-color EDH builds (this is my first attempt at Mono-Black), I think Tinybones presents a unique situation due to its cost (playable turn 1), built-in draw engine, and win-con rolled into one. Put this together with consistent mana sources and a low mana curve, and together this may be a winning combination. When I have done more testing I will definitely let you know.

As a first go at porting a discard control concept into additional colors there's still a long way to go before I think this idea could be anywhere near as refined as the other 20 or 30 decks I regularly play in cEDH settings. Any scrap of information or knowledge is going to be helpful in getting this closer to where I'd like it to be and I'm happy to see I asked questions of the right people since I've now got some additional resources to take a look at for inspiration. Much appreciated.

As far as the question of why not just Nath Stax, well, it's been done. It's a fairly standardized list at this point and, in true competitive settings the deck is pretty lackluster (in fact very lackluster), posting a sub 15% win rate according to our data with just a hair under 100 total games recorded. Most dedicated stax concepts perform at a relatively similar level in competitive settings and we've accumulated well over 2000 games worth of tracked data within our playgroup at this point in the last almost 3 years. Mostly the ineffectiveness of these types of concepts comes from their inability to develop advantageous board states as quickly as the most powerful contenders in the meta (Nath actually does ok at this with access to green ramp sources), but also how slow and inconsistent many stax type pieces are in terms of performance. The best performing pieces are asymmetrical in effect and hate out universal lines of play that lead to advantageous game states for any deck (limiting card draw, limiting library searches, limiting graveyard access, limiting usability of a deck's ramp sources). At this point that's really the reason for choosing Tymna more than anything else, she's a proven commodity with a measurable net positive expected win rate value that enables play along the axis of attrition by acquiring additional resources to match opposing decks (the draw trigger is a very nice complement to the powerhouse control engine that is Geth's Grimoire+Words of Waste as well as it provides a means of consistently engaging the mass discard lines of play the turn those cards are played since she'll often be out on turn 2, though this play pattern is currently slower than our data suggests is competitively ideal).

I'm definitely not satisfied yet with a "no combo win line" list, that just strikes me as a stretch. There are some decks that do manage to perform decently with a primarily combat based game plan (Yuriko and Najeela certainly come to mind, though both prove the concept falls short of top tier) and this list might be capable of a similar feat, but it feels like there should be some combo oriented options that fit within the concept to run as side line game plans. I've definitely got some Raz reanimation lines on my radar for testing, the colors allow access to some other reanimation loop lines as well.

The Drannith Mask lock combo stikes me as interesting. I'll have to give that option a few looks in testing as well. My gut tells me that dividing attention to multiple lock out concepts will decrease overall deck performance consistency, but there's really no way to truly tell without getting in some games and acquiring some data.

Thanks for sharing your thoughts on Tinybones in mono black shells as well mate, there are certainly issues mono colored decks have from a competitive standpoint and I haven't worked with mono black enough to know these drawbacks as intimately as I do for mono green or mono blue.

Been playtesting a bit with Tinybones and discard axis concepts the last week or so, and the one thing I've found to be the most powerful play pattern possible within the concept is the combination of Geth's Grimoire or Waste Not and Words of Waste. The discard angle of attack is very potent when you can use the additional draws from one or the other to trigger multiple Words of Waste activations in one go to mass discard all opposing hands and basically lock them out of ever having resources in hand to do anything relevant from that moment on. This trio feels very much like a must run for concepts playing along that axis.

How's the deck been faring in general for you and what cards have felt like they've offered solid performance within the concept so far?

Oh, and before I forget I've been playing around with some mono black lists that didn't quite leave me satisfied so I'm doing more watching of your list (and other mono black lists) while I branched out to try to apply the concept in additional color shells. The one I worked on today and played around with some is here: Abzan Attrition. I'd definitely be interested to hear your thoughts on how discard oriented concepts could be competitive in both mono black and Bx shells.

gotcha, didn't realize Words of Waste shot up in price that much - got mine when they came out for a buck ><

best of luck, and happy deckbuilding!

Words of Waste? Seems like a funny way of keeping everyone's hand low.

I personally run Marchesa, the Black Rose at the helm of my Grixis discard deck so that ETB/Death triggers are abuseable and reusable. It also opens up Oona's Blackguard, Sadistic Hypnotist, Dauthi Mindripper, and a few other discard options.

Feel free to check out my list for ideas. It's not budget friendly as a whole but it should still help out a ton. Upvotes on any of my decks are appreciated. Hand Hate Marchesa

Coward_Token on Words of Waste vs wheels

Player A casts Wheel of Fortune on their turn. In response, player B activates Words of Waste one time. Since the card draw is simultaneous, will player A discard its first or even second drawn card? What if a wheel effect resolved while player B is the active player?