When you cast Genesis Hydra, reveal the top X cards of your library. You may put a nonland permanent card with converted mana cost X or less from among them onto the battlefield. Then shuffle the rest into your library.

Genesis Hydra enters the battlefield with X +1/+1 counters on it.

Genesis Hydra occurrence in decks from the last year 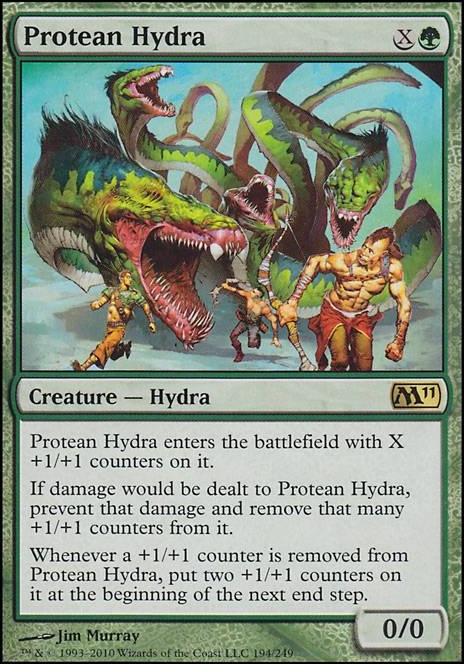 Balaam__ I understand how Nykthos works, lol, Iâm saying that without a huge payoff itâs really not worth it. Whatâre you going to do with 12 mana from Nykthos? If youâre making that much mana youâre more than likely winning anyways.

My point is if your opener is 2 lands, relentless dead, ayara, gifted aetherborn and 2 other cards, if one of those lands is Nykthos youâre gonna have a bad day.

Without a good payoff like a huge Genesis Hydra back in old standard, Nykthos is lame, it could potentially hurt you instead of helping, and with Mutavault, you need all the black sources you can get.

I am absolutely delighted by your comment and I am very honored to know it's your first deck. Thank you so much!!! <3

1) Kogla, the Titan Ape + Hyrax Tower Scout are absolutely perfect replacements, also opens lines up with Eternal Witness for Benefactor's Draught/Vitalize/Touch of Vitae (I'll address this one dw). I wouldn't say slower, since we can actually tutor it whereas Cloudstone Curio has to be drawn or topped off with Genesis Hydra.

2) Heartwood Storyteller has been quite the critical piece, however, I can see it being replaced by Ohran Frostfang, though I were leaning a little into the top-heavy side with this build. I hope your meta isn't too fast as this deck falls by the wayside in T4 metas. As for Touch of Vitae, this is a bit of a lynchpin of sorts as haste the MAIN reason we run it, it ensures that the dork we brought out can actually be used and to win... with an untap. I wouldn't compromise on this card, if it's too difficult for you to obtain add my discord I might be able to help you out. (Inkmoth#4507)

l13199l: It'd look exactly like that, a dork producing 6 mana, but tutorable. I was mostly considering it cause Selvala Brostorm implemented it. I don't think I could take the psychological toll of swapping Cloudstone Curio with Kogla, the Titan Ape on the principle of messing with my Avg CMC. So I'm really at a loss. Hyrax Tower Scout will find a place, I just can't seem to find a slot atm. For now, I am MORE than satisfied with the list.

Also, Genesis Hydra is almost always looped for the Thousand-Year Elixir on the winning turn. Emergence Zone is for the situation it gets stuck in your hand. Otherwise we dig and Noxious Revival and Genesis Hydra for it.

First, needs more 1 drops. I recommend going heavy into the 'ramp a stompy thing out t2' with a playset of Birds of Paradise. Not only ramps and fixes your mana very well, it also has flying and is therefore great to mutate onto.

Second, your manabase sucks. Zagoth Triome is mediocre at best. In Modern, you absolutely cannot be playing taplands anymore. It's too fast unless you're playing a more traditional control deck. Fortunately, there's a couple real cheap cards that will dig you out of this hole: Llanowar Wastes and Yavimaya Coast. $1-2 each, they should be a playset unless you're going with a higher quality manabase. Cut at least one Island and at least one Swamp to add these. There are also other better lands, but those should hold you over. You really should cut Triomes, though, and include either Fastlands(Botanical Sanctum and Blooming Marsh) or Checklands(Hinterland Harbor and Woodland Cemetery). Green t1 is going to be part of your gameplan.

Third, Parcelbeast and Migratory Greathorn are your absolute best t2 plays. Use them to start ramping, because in the end it's the mana you'll need.

All-in-all, just needs an actual manabase and some curve tweaks, but the core of the deck looks at least functional(not super familiar with the modern meta atm, so I'm unsure if it'll actually do well). I like the idea of a lategame Starrix acting as a sort of Genesis Hydra. Going t1 Birds into t2 Greathorn, ramping into a t3 Gnarr and an easy t4 Starrix or Dirge Bat should be game over.

Oh, I forgot -- Starrix is good enough that you should go 4x. Archetype sucks.

Also, cut a couple cards for removal. While Starrix doesn't necessarily hit it, it skips it. Seriously, you can have any number of nonpermanent cards in your deck and it won't hurt starrix one bit. Most of our non-ramp non-land cards are large enough that hitting a handful of them should be worth it.

Sorry for long post, but I got exited over Starrix for a second. It's totally reasonable to play it t4 and get 3+ permanents off it. At least one of those should be a decent sized creature. Then, you'll likely have a couple extra cards in hand and mutating starrix a second time for 4+ permanents is back breaking for any strategy. You just need to make sure you have Parcelbeasts and Octopuses going so that you can keep your hand full -- because you'll have all the mana at that point.