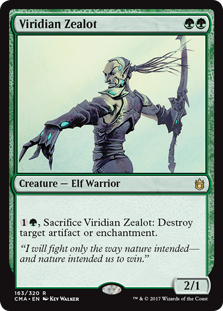 Viridian Zealot occurrence in decks from the last year

Ok, now I'm off my phone and on my computer, and this goes a bit easier. There are a lot of budget cards that are solid for Meren. Caustic Caterpillar and Viridian Zealot are great self-sacrificing utility. Spore Frog can really lock down a table. Cards like Fleshbag Marauder , Plaguecrafter , and Shriekmaw are all good removal spells that help put counters on Meren. Butcher of Malakir is budget Grave Pact you can run.

I failed to mention Sakura-Tribe Elder and Yavimaya Elder are also good ramp/land tutor cards that synergize well with Meren.

Now, that all said, I'm not sure how exactly you want to win with the deck, but Aristocrats tend to be budget, and you can run several of them to bleed the table dry that way doing what Meren wants to do; have critters die. Blood Artist , Zulaport Cutthroat , Poison-Tip Archer , Syr Konrad, the Grim , Jarad, Golgari Lich Lord are all good budget options for this strategy. But there are other directions you could go; it's up to you. What do you want your deck to do?

I hope this has helped out a little more.

Yisan and Her Wandering Friends

eerie343, I guess I would say to add in Whisperwood Elemental , Nullmage Shepherd , Quest for Renewal , Ravenous Slime , Veil of Summer , Viridian Zealot , and Vitalize .

Inkmoth: Happy to help! I added you on discord (username AcademyHeadmaster), but I'm not super well-versed with the platform so let me know if you don't get my message. In terms of the deck, I've got some more ideas to fix the card flow problem. Upon further consideration I don't think my previous suggestion of Guardian Project will cut it (too slow, not a creature for yeva, and you already played a lot of creatures by the time you drop the enchantment anyway). Multani's Acolyte might be enough as a second, albeit worse, Elvish Visionary . I wouldn't mind increasing the number of elves for the mana producers who rely on it and I found that Generous Patron type effects really overperform. As you said in the primer, it's an early body that replaces itself and can later be important as an elf for mana producers or for Growing Rites of Itlimoc  Flip. Similarly, how much would it hurt to run Viridian Zealot over Caustic Caterpillar . I think the elf synergies justify the one extra cmc in this budget build. Sometimes you just need one more elf for Priest of Titania type effects to go infinite and in that case I wouldn't mind just running out Viridian Zealot . Finally, I've found that Cryptolith Rite has underperformed. Too many of your cards already produce mana and you don't want to be running out cards like Reclamation Sage just to tap because you have a rite out. Maybe Joraga Treespeaker as another mana elf? I'm going to try these changes for now and I'll get back to you on their performance

Gremyo : You are right! I forgot to add the removal cards here in the post ( i had 'em in a different pile). Added Krosan Grip , Reclamation Sage , Viridian Zealot , Acidic Slime , Caustic Caterpillar .

What (budget) cards would you suggest to improve the ramp problem?

Gremyo : You are right! I forgot to add the removal cards here in the post ( i had 'em in a different pile). Added Krosan Grip , Reclamation Sage , Viridian Zealot , Acidic Slime , Caustic Caterpillar .

What (budget) cards would you suggest to improve the ramp problem?

CyborgAeon: Sorry for the delayed response, I appreciate your comment and wanted to spend a bit of time on the response (this was the first time this weekend I've had a chance to sit down at my compuuter). As for the individual cards.

I've thought about Natural Order in the past. My biggest issue with it is that as you mentioned, it only fetches green creatures. While there aare a lot of good green creatures in the deck, there aren't that many that I would want to spend Order on. Yisan would probably be the primary target and then it feels too slow. I have a variant of the deck which packs Protean Hulk , which would give much more bang for buck. I will add it to the maybeboard there, however I think that here it seems a bit too weak.

Viridian Zealot is cool but more expensive than Pridemage :P

The topic of hatebears is an interesting one. I have seen a few Saffi lists who employ stax/heatbear effects however have opted to focus more on racing to combo. I know the deck will never be faster than lists with access to blue/black however my preference is to spend card slots on ramp and card draw rather than only having limited draw/tutors due to trying to fit a stax package in as well (not to mention having to waste tutors on finding stax pieces rather than digging for win cons). Along those lines, I do entirely agree that I should make the combo as fast as possible. I do really like your suggestion about Elvish Spirit Guide . I'll add it to the maybeaboard for now, I'm not sure if I want to cut Mikokoro for it however it feels like a good addition to the deck. I was also thinking of adding Voyaging Satyr as well, as it does the same thing as Priest of Titania in the Yisan line.

For me, Summoner's Pact falls under the same category as Natural Order . The limitation on it makes it only really good enough if the deck was running Hulk.

I do like the idea of Leyline of Sanctity as a meta include. I don't think it's good enough for mainboard however I will add it to the maybeboard (I think it will be worth adding some modular swaps for the deck) and that one seems like a funny idea, especially with Rector.

As mentioned, I appreciate the input - there are some solid ideas and I think ESG will end up in the list very soon.

It seems strong - though with such an investment in creatures have you considered Natural Order ? I know it only gets a green creature, but you've a slew of reasonable targets.

Also Viridian Zealot is a mana cheaper than Qasali Pridemage & it's an elf - making that cheaper.

Your lack of hatebears (selesnya's best trait) makes me believe you should consider more speed in your combo. Cutting mikokoro for Elvish Spirit Guide is a good example. Another would be including Summoner's Pact to find a combo piece.

My last advice is only that I'd recommend leyline of sanctity as a meta dependent option. Most cEDH decks use similar wins at the moment like by abusing aetherflux, or walking ballista, etc. So it can be a cheeky include.