Yorvo, Lord of Garenbrig enters the battlefield with four +1/+1 counters on it. 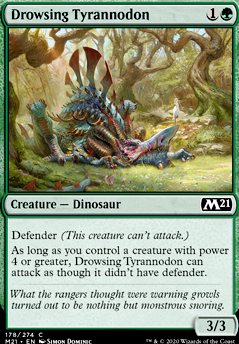 I feel especially during grindy games (mass removal) that lair of the hydra is better, its simply more versatile. Ideally during the first few turns your most likely focusing on casting creatures and not using treetop... By the time you are not casting creatures you probably have a decent amount of land. I will have to play test more...

Also I am not completely sold on oath, for example I could be using 3 x dungroove elder instead. Especially since we have so many 1 drops.

Omniscience_is_life on Adherence to Archetype

Let me pose some examples, and you may take from them what you wish:

If I build a deck with Yorvo, Lord of Garenbrig as my commander, but every other creature in the deck is an Elf, what archetype have I built?

If I build a Marwyn, the Nurturer deck, but every other creature in the deck has a random subtype, what archetype have I built?

Oh, and Maybe any of these ? Ilysian Caryatid Yorvo, Lord of Garenbrig , Pelt Collector

Other non-legendary bombs are Hamletback Goliath , and Artisan of Kozilek

Avatar of the Resolute