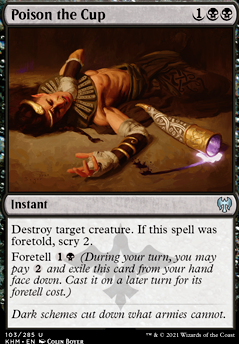 Destroy target creature. If this spell was foretold, scry 2. 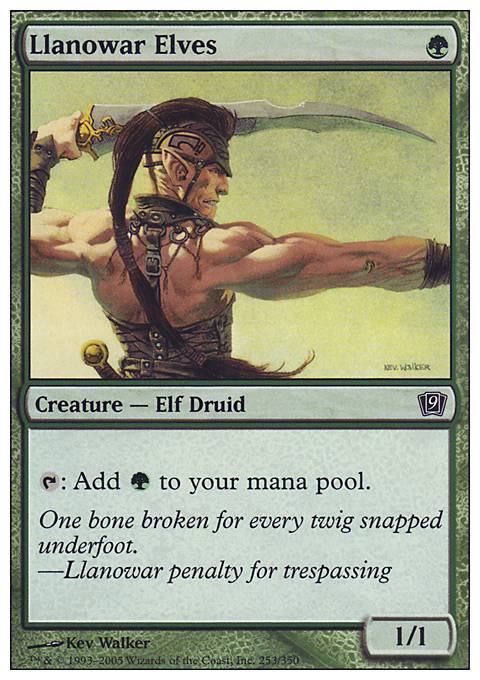 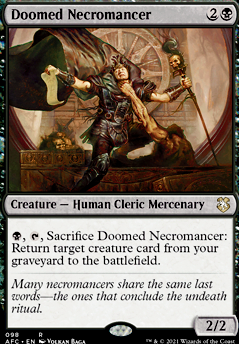 BishopAtavist Thank you for the comment, and I agree! Milling is normally not something I would go for in a deck like this, but it's sort of a fun risky strategy to use during some games of commander and can for sure speed up the process of feeding the graveyard. Cards like Sadistic Glee still get to proc from creatures sent to the graveyard this way as well, so that's an added bonus. Additionally, at least in my playtesting, I seem to have included more than enough ways to get creatures out of graveyards. So even if a few good cards are lost this way, you should still have plenty of options further in the deck. As far as Buried Alive, It's only in the maybe deck because I haven't gotten the card in the mail yet haha. It'll be thrown in, likely in place of Unhinge, as soon as it gets here!

TheSnuggleLord I appreciate the feedback! I for sure want to keep using sheoldred, even if it's not ideal for this deck. I'd probably switch her out in situations where I'm not playing with friends, since forcing sacs seems like a good way to put a target on myself. But for more casual situations it's been pretty fun haha. I actually got a copy of Urborg, Tomb of Yawgmoth with the intention of using it in a dimir deck later. I hadn't at all made the connection that in would enable swamp walk. That is actually beautiful, I'm going to throw that in the deck tonight!!

Poison the Cup for sure seems like a good swap in for something like Eaten Alive, since I have enough other ways to sac, and otherwise the cost is the same. So, you're definitely right, having it A) potentially split the cost between 2 turns, and B) be safe from removal by opponents, makes for a great removal spell to have in the deck.

I think I actually ordered a copy of Gravepurge in one of my larger orders in the last week or two, it might have just been lost in the stack of cards I've been considering for the deck. I'll for sure have to reconsider it.

I do like that combo that Bolas's Citadel and Bone Harvest or Gravepurge could pull. At this point I need to work on a side deck of sorts to keep track of all of the potential combos or cards I want to try. There are so many options here, and the hardest part now is choosing what to set aside when trying out the other options haha.

Thanks again both of you for the comments!! Looking forward to further refining this deck, and maybe creating a fork of it with another commander!

I just saw your list yesterday while I was scrolling through the site, and wanted to say I find it all so charming! I love decks hungry to consume their own creatures and use them as fuel. Korvold, Fae-Cursed King, Hogaak, Arisen Necropolis, or even K'rrik, Son of Yawgmoth, are commanders that just keep on giving as long as you throw bodies into the furnace so to speak. It's a delight to get their engine rolling, and I've always wanted to build a Tergrid, God of Fright Â Flip or Sheoldred, Whispering One deck.

If you planned on using Sheoldred still, Urborg, Tomb of Yawgmoth is both flavorful and helps turn all of your opponents' lands into swamps, allowing sweet unblockable commander damage. I've never really left a comment on this site, but looking at this deck list makes me want to show my K'rrik deck some extra love. Props dude, I'm gonna love following this deck's progress.

While it's on my mind, something that might help, using Poison the Cup for its foretell may add to 4 mana, but it lets you store a Murder outside of your opponent's influence and lets you scry off the top, allowing you to search for lands, or more removal/creatures to send to grave; and if you might be looking for more mass recursion to your library (whether to avoid Rest in Peace or similar effects, Gravepurge is another way to draw whichever creature you might have planned on saving.

Bolas's Citadel may be pricy on mana, but it mass sacs, and after a Bone Harvest or Gravepurge could allow you to just rebuild your board with your life total. Anyhow. I love this deck, apologies for the long winded comment.

Just a few suggestions on the utility pieces: Sisay's Ring is the same thing as Ur-Golem's Eye, but Thran Dynamo is better. Expel is better than Excoriate. Unless you really care about preventing regeneration, Doom Blade is better than Terror, though I personally prefer Poison the Cup. 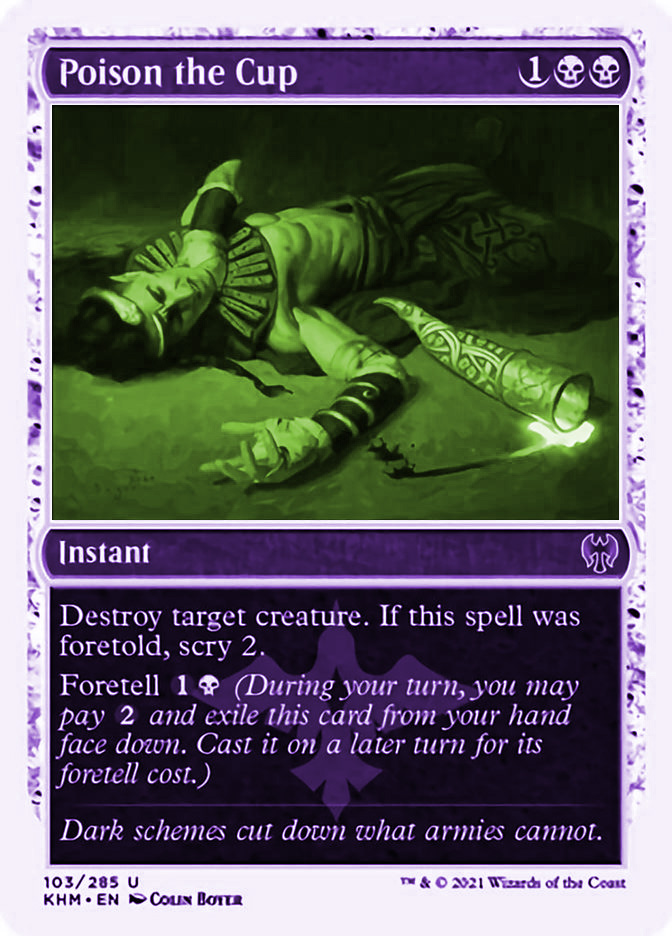