Whenever Teneb, the Harvester deals combat damage to a player, you may pay . If you do, put target creature card in a graveyard into play under your control. The sorcerer Supreme 2.0
by Angel_Zero 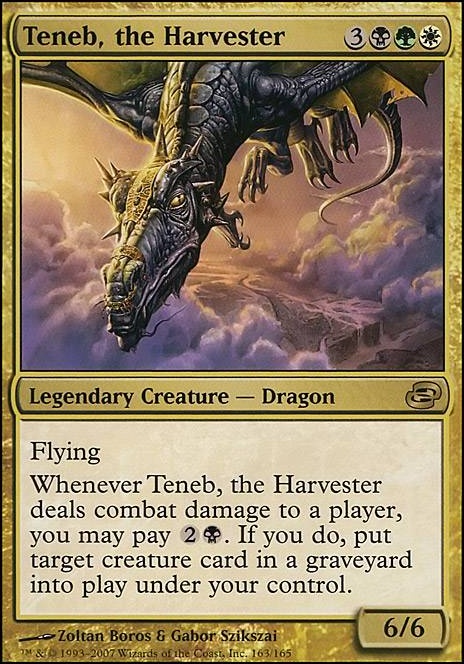 FDW Reign of Fire
by feardeadwateredh

First game report with the updates. Last night was a fun time, for me anyway, and Lathliss, Dragon Queen proved to be an all-star upgrade. I kept kind of a slow opening hand with a lot of ramp and generally kept my opponents from worrying about me too much. I discarded Teneb, the Harvester early, and then brought him out with Animate Dead while keeping mana open to protect Scion. The ruse worked and the removal hit Teneb instead (who I was mostly using as bait). Due to extra cards from Phyrexian Arena I discarded a few other dragons, and then finally dumped Atarka, World Render, Lathliss, Dragon Queen, and Kolaghan, the Storm's Fury into the graveyard on my opponent's end step before my turn. Knowing that one blue player was tapped out and that the other probably didn't have a counterspell, I played Patriarch's Bidding, which I had grabbed earlier with Grim Tutor. I had ramped Rhythm of the Wild out for free earlier when I swung out with Scion as a copy of The Ur-Dragon, so everything had haste. Six dragons ETB's, and Lathliss entered with them, making six 5/5 dragons. They all had haste, and Atarka gave them double-strike, so it was game, set, and match.

Not only was Lathliss good, but it was very nice to have all my support and reanimation pieces be 3cmc or less. I didn't have opportunity to use Kairi yet, but it was great to know that I had more than one good protection piece for Scion at my disposal.

kookoo That definitely could work, as could Spark Double and Sakashima of a Thousand Faces (who could also be used for neat tricks like using Teneb, the Harvester to reanimate himself). The difficulty is that we are fairly tight on slots already, and I am thinking about cutting Vorosh, the Hunter and maybe another card to put Scalelord Reckoner back in as well as maybe adding Kairi, the Swirling Sky and/or Iymrith, Desert Doom. Every dragon we cut from our toolbox leaves us without a tool that we can summon any time, so support pieces need to be really good in order to make it! Neat idea though!

Teneb, the Harvester would fit and everybody loves dragons. Doesn't even need to be your graveyard

Tayam, Luminous Enigma and Ghave, Guru of Spores are probably your best bets, as mentioned above. Other options include Kethis, the Hidden Hand, which would require some sort of legendary sub-theme, Nethroi, Apex of Death, which doesn't require Mutate cards but would greatly benefit from them, and Teneb, the Harvester or Karador, Ghost Chieftain for general graveyard shenanigans. As far as partner pairings are concerned, Ravos, Soultender and Tormod, the Desecrator is great for graveyard stuff while Reyhan, Last of the Abzan and Alharu, Solemn Ritualist are synergistic with counters and aristocrats stuff. Mix and match them because partner commanders are awesome!

I do think Tayam or Ghave would be your best shot, but the others may prove to be interesting depending on your personal preferences.