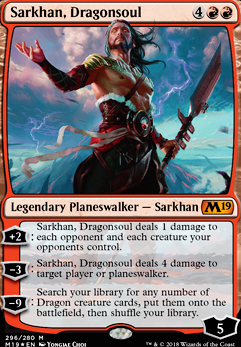 +2: Sarkhan, Dragonsoul deals 1 damage to each opponent and each creature your opponents control.

-9: Search your library for any number of Dragon creature cards, put them onto the battlefield, then shuffle your library. 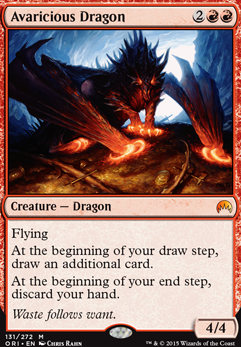 Full disclosure: As anyone looking at that screenshot will recognize it was a bot match but I did that because I wanted to get a shot at fully playing out the Arcane adaption into Sarkhan, Dragonsoul

ulti and holy crap. It took me a few solid minutes to select all the rat 'dragons'. I got him down to 1hp and in that turn it murdered one rat so I was down to 129 of them. Next turn I swung out and well you can see the results. This is possibly the meanest most abusive deck I've ever played. Nice work, to say the least.

Have you thought of Ugin, the Spirit Dragon or Sarkhan, Dragonsoul

Spawn of Sarkhan 3.0 (want to upgrade to modern)

Sarkhan, Dragonsoul is garbage, and Kargan Dragonrider is also garbage. They are simply not constructed-rate cards. Spit Flame and Dragon's Hoard can easily go into the maindeck, and Sarkhan the Masterless would be a great addition. You can play around with the exact numbers as you see fit.

You might be interested in Sarkhan, Dragonsoul . He adds additional ramp, can be potential removal, and his ult puts every dragon from your deck onto the battlefield. His ult plus Scourge of Valkas wins you the game.