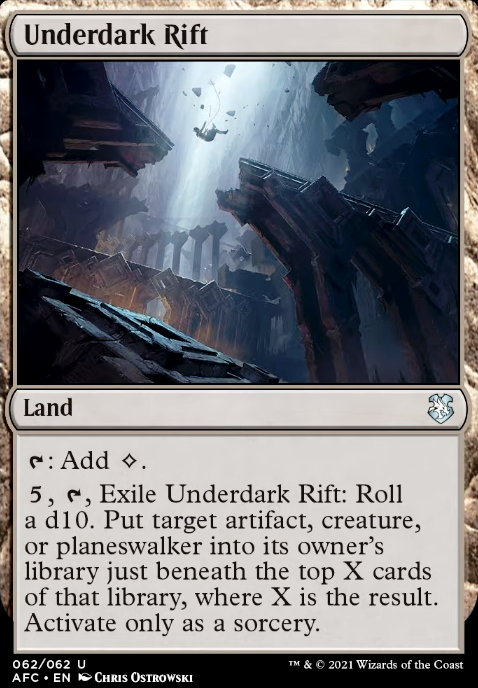 , , Exile Underdark: Roll a twenty sided die. Put target artifact, creature or planeswalker into its owner's library just beneath the top X cards of that library, where X is the result. Activate this ability only as a sorcery. (Remember that MTG spindowns are not well weight balanced, so please roll a die that isn't an MTG spindown.)

Bound in Chains of Gold
by grimgooding

Gidgetimer on Clarification on Underdark Rift

Wait until the ability resolves

Roll a d10 and put the target under the top that many cards.

legendofa on Clarification on Underdark Rift

You actually choose targets before you pay costs. So everyone knows which permanent is being targeted by Underdark Rift before you start tapping and exiling.

The streamlined order of actions for casting a spell or activating an ability is:

CamraMaan on Clarification on Underdark Rift

To use Underdark Rift you pay 5cc, tap it, then exile it. This is when the ability goes on the stack, correct? Then after it is allowed to resolve I would roll the d10, see its result, then choose the target creature...? I'm mostly curious about when the targeting occurs, as getting to choose your target after knowing the result could change things depending on how many threats are worth removing, and how long they would be removed. Thanks in advance! :)

seshiro_of_the_orochi on What to do against Rakdos, â¦

I went through my Moraug, Fury of Akoum to find some useful removal. Underdark Rift maybe?