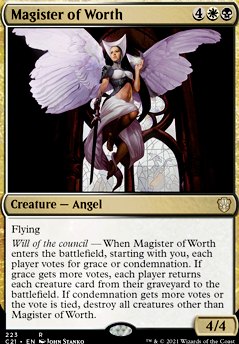 How to Become a Spy
by brandonplaysmagic

Magister of Worth Discussion

Magister of Worth . Great wings.

I vote for Tim. Although if you want to take the group hug a little further go for any of the good will of the council cards Plea for Power , Council's Judgment or Magister of Worth