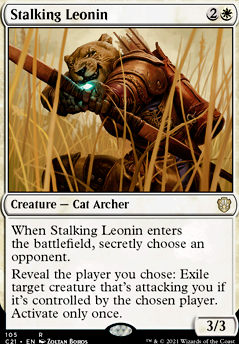 When this enters the battlefield, secretly choose an opponent.

Reveal the player you chose: Exile target creature that's attacking you if it's controlled by the chosen player. You may only activate this ability once, unless it re-enters the battlefield. 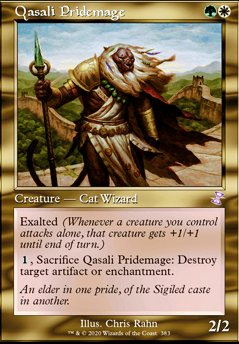 Thanks for suggestions ^^ I made a few changes, Is there any good card that can replace Stalking Leonin ?

Its funny you said that. Because when I was looking at that card Stalking Leonin I was thinking the same thing, but more so how good it is 1v1. So I bought a playset

Also just going to put out how strong Stalking Leonin is in Legacy. Also you can flicker it with Felidar Guardian and pump it with King of the Pride. All uncounterable with Aether Vial/Cavern of Souls which this deck needs but I forgot in the two seconds I took to write it up