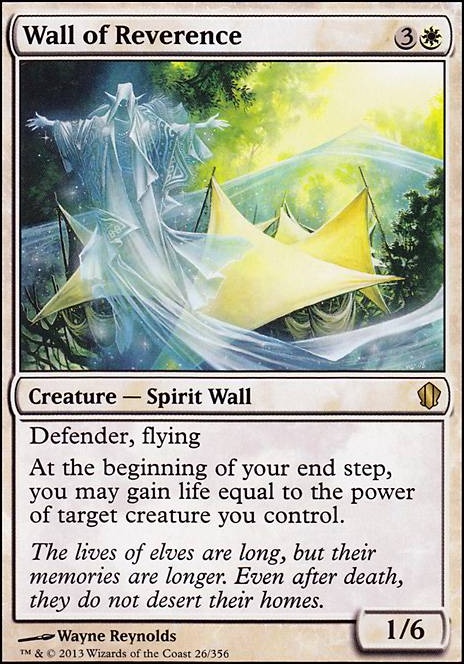 At the beginning of your end step, you may gain life equal to the power of target creature you control.

Wall of Reverence occurrence in decks from the last year

The Grim Reaper's Bank
by nhadfield 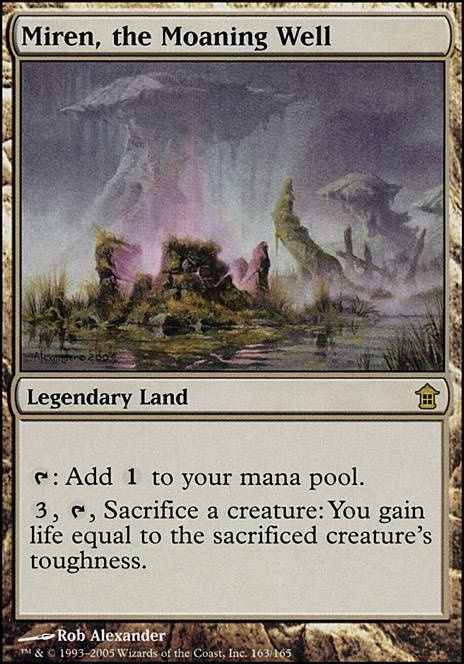 Get a life? I have plenty!

Hey, you should totally run Sunbond in your deck!!! Not only is this card amazing for lifegain decks, but with your Wall of Reverence you will be able to double that creatures power every turn and gain lots of life!

One more; Wall of Reverence for Chromatic Lantern

Wow this is all really excellent advice. Dawn of Hope and Martial Coup are really smart includes.

So the original plan of the deck was to set everyone up to lose their lands to Fall of the Thran and then shut down the second half of the effect with Mudhole to try to rebound faster than my opponents. I went with an all-in combo strategy that's weak on tempo but with some playtesting it's really clear that it needs to make plays that aren't just big board sweepers to stabilize.

Also (believe it or not) i put a lot of thought into the mana base. The idea was to just give up on mana rocks and try to hit 4 lands on the draw so i can stick Academy Rector and Wrath of God on turn 4 reliably. You might imagine that doesn't do super good against decks that get a planeswalker just as soon or sooner.

I like the new mana base you propose. It's more reliable on the draw and still pretty good on the play. Going first is going to be good for this deck.

More to the point i think a lifegain strat would benefit the deck. I notice you didn't mention any creatures but i think Wall of Reverence and Crested Sunmare could be good buddies for the early to mid game before i combo out.

Wall of Reverence and Serra Avatar have both previously been in the deck. As a whole I have moved towards a more creature light deck, with only a few choice creatures. Wall of Reverence is nice but unless Serra Avatar is out on the field it wont do much unfortunately. Serra Avatar , while being a large body, doesn't have any evasion and will more often just get chump blocked by a small creature. I had previously also taken out Beacon of Immortality however I hadn't realized the combo of it with Sanguine Bond . I like the combo and will need to reevaluate the list and see where there is any chaff I can cut it to trim it down more. Replacing Norn's Annex with Sphere of Safety is absolutely something I am going to do. I've noticed the exact situation you just said happening a lot, 2-10 life to kill someone when you swing doesn't deter someone enough since it kills me if they swing.