As you enter the territory of The Great Calamity, you hear a faint sound of drums off in the distance. You may choose to listen...or not. Your choice.

What is best in life? Crushing your enemies. See them driven before you, and to hear the lamentation of their women. You relish at the thought. If you haven't already run away in fear...then clearly this is the deck and more importantly - Commander for you. Zacama can easily overrun and terrorize the battlefield all by herself, but there are times when you may need to employ a pack and it's tools to crush a wily foe. The design of this deck is as simple as nature: dominate and destroy all before you using the embodiment of pure savagery and might.

This deck's aim is to be a well functioning Dinosaur tribal deck that maintains the aesthetic of Ixalan. The deck's strategy comes in two phases - First is the Timmy Manifesto. Basically you ramp and play big stompies that wreck face. Second, your gameplan evolves into a Spike Strategy where you start looking for combo pieces to seal the win. Zacama is one of the keys to victory as there are multiple combos that work with Zacama to create infinite mana while untapping your lands. I explain how those combos work in the "Tooth and Nail" section of the accordion. There's also a backup plan in case Zacama becomes unavailable involving Forerunner of the Empire , Polyraptor , and Rite of Passage .

To get to victory, the deck requires a steady stream of cards while having enough big scary creatures to fend off other players who may wish to deny Zacama her due. Touching on that, the deck's primary weakness is that it's politically weak. For some reason having all the removal options attached to my commander makes it something of a target while just sitting (probably loudly) in the command zone, so making friends is important! That's why Yavimaya Hollow is very useful as it can target opponent's creatures, additionally Pir's Whim can punish those who have been less than friendly early on as well. Drawing cards is also something of a weakness in Naya so taking some inspiration from the Professor of User:TolarianCommunityCollege, I included some good green draw options, as well as the mono green draw engine of Abundance + Sylvan Library .

To measure the deck's power level, I use the chart referenced in the video How to Power up your Commander deck by The Command Zone. From that video, I would guess that this deck fits well within the Focused category. It's meant to face upgraded Casual decks, Optimized decks, but will get absolutely destroyed by cEDH decks, and tear Jank decks to pieces too quickly. Also, I definitely advise you to watch the video referenced above - it's really good for helping you to communicate to other players what kind of deck you are working with.

Each combo in this deck has a special name or designation - for flavor.

There is more than meets the eye when it comes to this deck, as there is an alternate commander - (a "legal" legendary creature that I switch my commander to) for more "casual" games. Grimlock, Dinobot Leader Â , is the epitome of what makes Dinosaurs cool - but turned to 11. If you disagree then I would like to officially inform you that you are wrong. Good day. Silver-bordered cards were legal in commander from December 01 2017 until January 15th 2018, however I maintain the belief that if a silver-bordered card isn't too disruptive (refer to the silver-bordered cards that were banned (or remained banned) during the Jan 15th legal period) then it's appropriate for play unless the playgroup says otherwise. With Grimlock Â  at the helm, the deck does lose a lot of it's ability to control the board. But what it gains is a more streamlined approach: Play Dinos. Turn Right. Win Fight.

Additionally, you get to live out the fantasy of the following episode of transformers:

If you were wondering about what transformer I use to pay for Grimlock Â 's activation cost I chose the MP-08 Grimlock Masterpiece, pictured below: 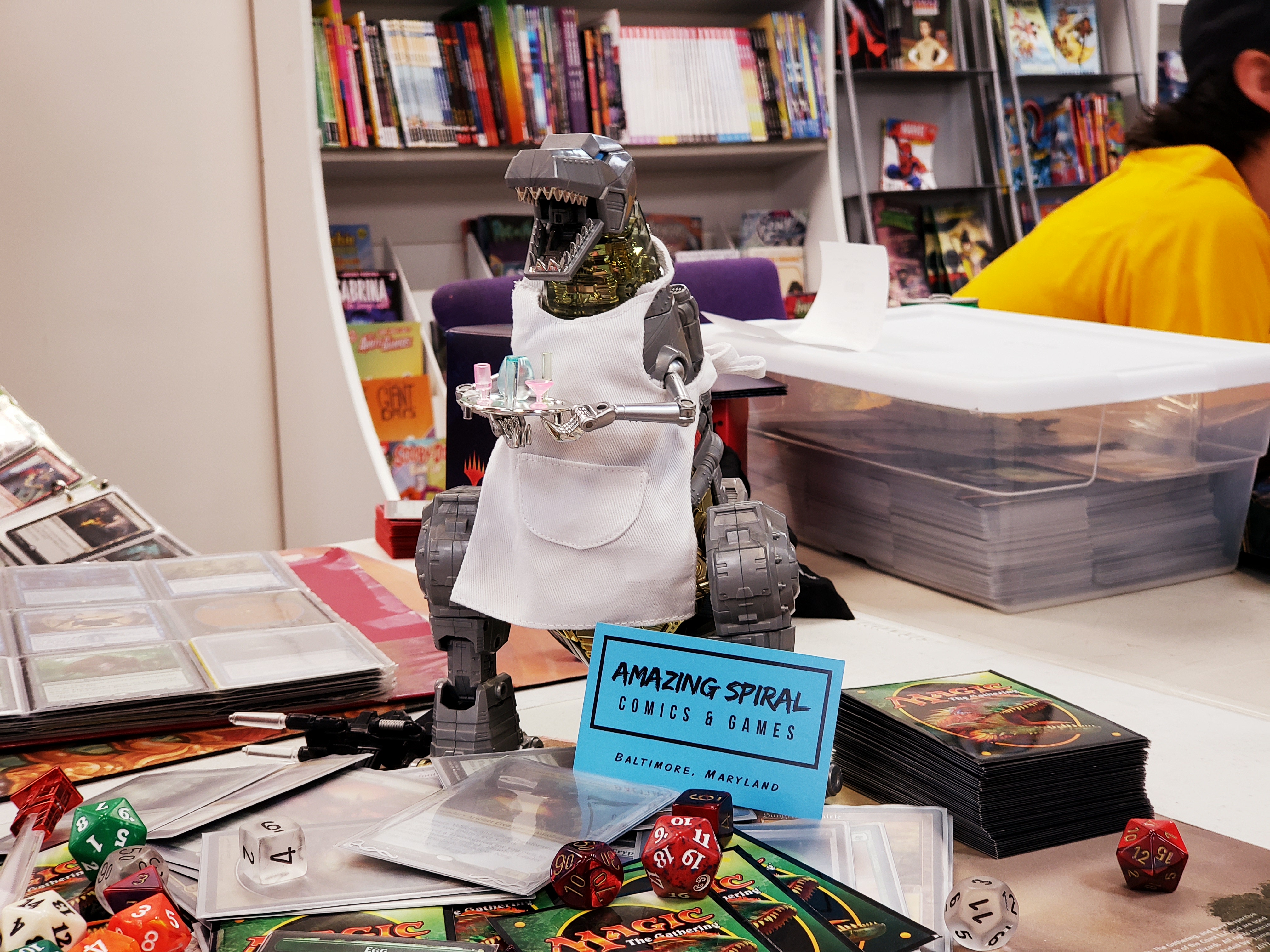 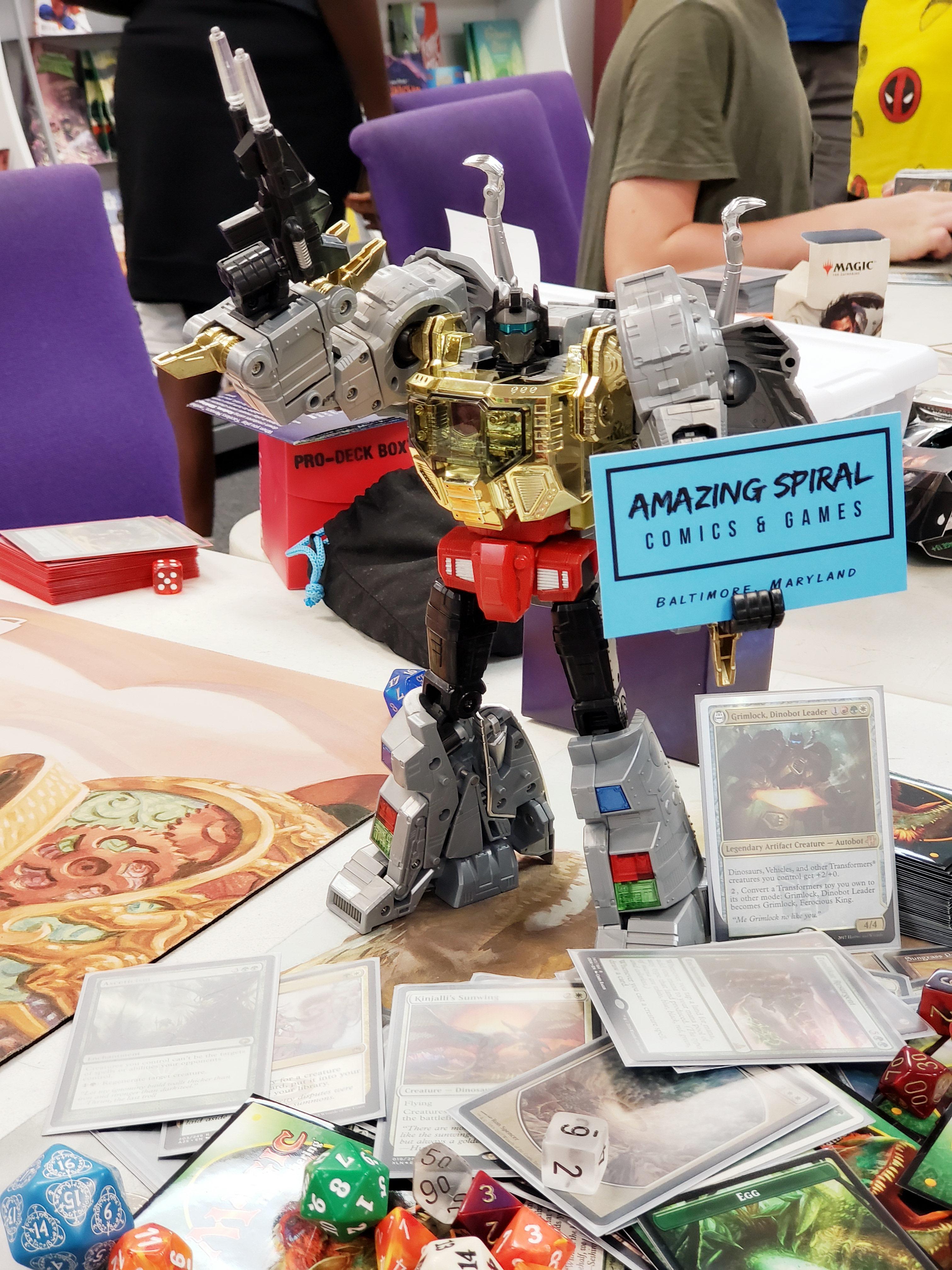 Just as the title says, there's an official alternate commander for this deck now, Grimlock, Dinobot Leader  Flip! And what better way to announce this at one of my favorite venues: Amazing Spiral of Baltimore? What was funny however was that the majority of players at the venue were kids...and has absolutely no idea what Transformers are...or why they were awesome. So I was hit with a lot of sad statements like: "What's that? A Transformer? Too bad Transformers are lame now." Ugh, what's wrong with today's youth? Or am I just too old? Have I officially crossed over into the "old guy playing magic" stereotype? I guess this is what I sound like now: Kids, back in my day Fetchlands were in T2, and were only 5 or 10 dollars! LOL. Well, at least the shop owner thought it was cool - he wanted photos for the shop's social media site, figure'd I would post some of the images here.

Additionally, I realize that with Grimlock the deck is essentially an episode of Transformers: Transformers: Generation 1 - Army of Dinosaurs. When Grimlock is leading the charge, that's what i'll call the deck lol. For those of you screaming about un-cards - yes, I know it's not legal, it's simply an alternate commander for a more fun or relaxed game of big stompy bois.