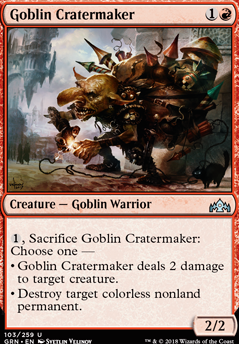 Goblin Cratermaker occurrence in decks from the last year 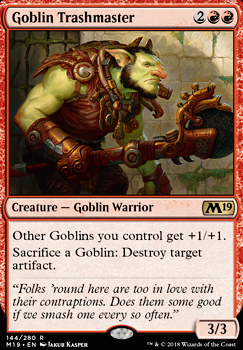 Wrath of the Machine (Active)
by munky702 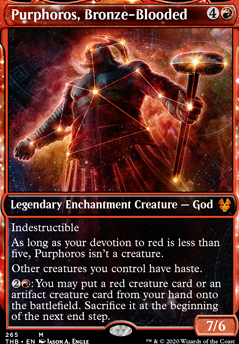 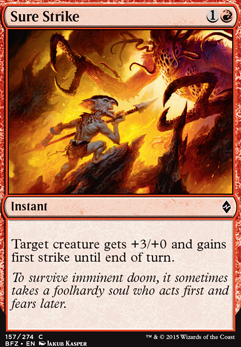 I intend to get a copy to try, but I'm still trying to figure out in what situations it would be better to go for the Oracle instead of just going for Ballista.

The most likely scenario I can think of is if you or an opponent has Collector Ouphe (or Null Rod / Stony Silence) out at the time you are looking to combo off. Still, casting the Oracle will cost you UU once you draw it. For 1R you would be able to cast Goblin Cratermaker and activate it to kill an Ouphe and then win with Ballista + Painter's Servant + Animar. If you were running Reclamation Sage instead of the Oracle you would only need to pay G to kill a Null Rod or Stony Silence and it would give you another piece of interaction in your list that works with Barrin to net value. And in the end, going the Ballista route leaves you with more of a deck in the end than the Oracle would if you get interrupted.

What sort of situations are you envisioning where the Oracle would be better than Ballista as your win condition?

It would, admittedly, make for a more convenient backup win condition if something happened to your Ballista that left it unavailable. I'm not sure how often something like that happens. Working your way into a combo line with Barrin wouldn't be as easy as an Oracle line would, so I can see why having the Oracle for a bit of redundancy is appealing.

I guess I can't really argue against redundancy. I still run Kiki-Jiki combo in my list as a win condition that doesn't require Animar because I don't like being dependent on my Commander to net wins. Running Barrin now is making me reconsider the inclusion of Kiki but most of my turn 3 wins have been thanks to it, so there is that.

Next you're going to sing the praises of Mind's Dilation .

Any way you slice it, Sunbird's Invocation is a card advantage engine. Its resource intensive to get onto the table, and requires further resources to do anything (spells in hand, mana to use said spells). It performs better with higher CMC spells, which makes it harder to cast multiple spells and get multiple uses. Are the free spells nice? Certainly. Stuffing your deck with cards you wouldn't play except when they're free means you're going to be spending a lot of time feeling extremely stupid when you don't see the 1 card that makes them worthwhile in your hand of 7 cards in a 99 card deck.

For example, Char does more damage than Lightning Bolt . Slotting char over bolt in your 99 because you're also running Sunbird's Invocation is extremely poor deck building. The card incentivizes you to run junk to get better triggers. Even in a casual deck I wouldn't recommend running junk cards to work around a card that isn't the commander.

Now compare Sunbird's Invocation to a similar CMC card, Sun Titan . Sun tit gives you a trigger when it enters. It can attack and block (with vigilance!), helping most casual deck game plans. It continues to get triggers turn after turn BY ITSELF, requiring no further resources or mana spent, just requiring cards in graveyard (which happens naturally as any game progresses). Sun tit doesn't ask you to run jank cards with higher CMC, it prefers to recur right in the CMC range you want your value cards to be.

Another way to think about this is opportunity cost. If you were playing any game of magic, and you had Sunbird's Invocation in hand, would you rather have a different card in your hand? This is opportunity cost. 6 CMC is pretty high, it means the card will sit in hand during the early game, whereas you COULD have slotted a different card that may have been applicable during that period. For example, if you replace Sunbird's Invocation with a Swords to Plowshares , is your deck going to function better in more match ups? The answer is almost definitely yes. Switch out StP with some other card your deck needs, and you've found out what your deck should slot instead of Sunbird.

Now lets imagine yet another situation. You've got your Sunbird in play, you untap with a fresh new turn. You cast a spell for 5 CMC. You get all giddy, and you flip up Mountain Mountain Shock Mountain Pyroclasm . Just because you went 5 deep into the deck with a 5 CMC spell doesn't mean you're going to get anything relevant, or anything that will be useful to your current board state. Similarly, with 1 or 2 CMC spells, you may hit exclusively lands and brick out. There is no guarantee that these triggers will help you, or give you the relevant cards you want to see. Its just a card advantage engine for red at 6 CMC.

Another aspect of Sunbird is that it promotes non-reactive deck building. Flipping Counterspell with Sunbird isn't going to help you, unless you're intentionally holding spells to use Sunbird trigger in response to someone else's spell. Your removal and interaction is going to want to be permanent based to take best advantage of Sunbird. I'm not saying this is good or bad, but certainly opens you up to being locked out where a spell wouldn't be locked out. A great example of this is slotting Goblin Cratermaker for removal, and having it die as a state based action upon entering if an opponent has Elesh Norn, Grand Cenobite . Another example Pyrite Spellbomb being locked out against Null Rod .

Sure, this card generates advantage when you're left alone to durdle in your ivory tower, but Scute Mob can one-hit-kill players on turn 30 after getting a bunch of counters. That doesn't mean Scute Mob is a good card in commander.

All of which people around my meta are talking about building.

Hey, I've been checking out your deck to find cards that would work well in my own brew and I have a couple suggestions for cards to possibly remove - Glissa, the Traitor is way too cute for a deck built around sacrificing your own things, and although you may eventually end up with one or two artifacts in the graveyard, it's just usually a pretty dead card. Goblin Cratermaker is also way too cute, just run Thrashing Brontodon instead. Marionette Master is too finicky for this deck, seeing as you run only 16 artifacts and most of them have low cmc and you don't want to sack many of them. I understand you create a lot of artifact tokens, but Marionette Master is really not the best way you could be taking advantage of sacrificing your artifacts. There are other cards I would take out, such as World Shaper and Rapacious Dragon , but for the sake of brevity, I'll keep this list short. I like the way you're going with this deck, and I think after some tweaking, it could be pretty good.

ToolmasterOfBrainerd on What are the pros and ...

Here is a decent midrange goblin deck. The mana can be made a lot cheaper. But if you want to play midrange goblins, then I wouldn't deviate much from this list. I do think that this list should have either Goblin Cratermaker or Goblin Trashmaster or both in the main deck. Also play all 4 Skirk Prospector . That card is nuts.

The biggest downside to playing this deck on a budget is that you lose Aether Vial .

UnderworldFiend,
Yeah, those certainly seem like reasonable choices. The deck is very weak though to Creature-based hate cards (e.g., Harsh Mentor , Goblin Cratermaker , and Yixlid Jailer ) and Creature-based Combo (e.g., anything with Devoted Druid ), so I definitely like some sort of removal there.