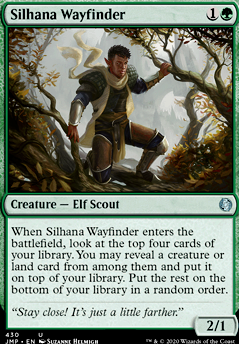 Momir Vig (not final)
by BogatyrOfMurom 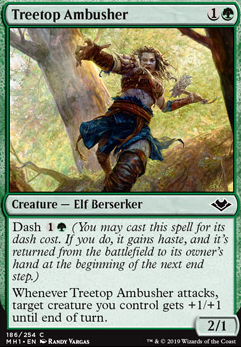 Have you thought about a card to put Pathrazer on the top of your deck deliberately?

For a budget, maybe splashing blue would do it, with Riverwise Augur?

The best bet though might be Cream of the Crop.

Alternatively, Brutalizer Exarch, Silhana Wayfinder, or Primal Command can all do it.

I'm gonna tell you the thing magic players like to hear the least.

You gotta cut some spells for lands.

20 lands is not enough, not even with 4x Gilded Goose . You have at least a 30% chance to miss your 4th land drop and not be able to play your Collected Company on curve. I'll link an article about the math below.

A traditional coco list from back standard would run as many as 25 lands. With goose you don't necessarily need that many, but 22-24 is still correct. I'd strongly consider cutting at least some number of your instants and sorceries, and Silhana Wayfinder is just going to be digging for a land a lot of the time anyway. You can make them more Lumbering Falls , to keep your lands productive during flood, but I promise that more lands will make your deck better and more consistent.

Frank_Glascock I think Control_Train has a very very nice framework for us to build on. I like the whole toolbox aspect of the deck and always trying to find a solution to what we encounter.

Destructor Dragon I've cut today as well and put Massacre Wurm in a 6 for a 6 drop. Sounds about right. If I need an effect like the Dragon I'll probably go for Woodfall Primus because it destroys something on entering the battlefield.

The Silhana Wayfinder I've cut 2 weeks ago, super mediocre. And I run the same creatures as you do: Sheoldred, Kokusho and Mindslicer. All very very good creatures in my opinion.

Sylvan Wayfinder I ran from the start, protecting meren at the cost of one land is super fine in my opinion :)

The list of instants and sorceries and enchantments what you swapped I kinda understand. Even tho I do see the value of Casualties of War and Mausoleum Secrets but If I had a imperial seal I would probably run it over Mausoleum as well :)

I agree with you with dismember being the weakest spotremoval, that's why I've cut it as well. I might try out the Sylvan Library again as well. I got it in my binder.

Sol Ring I havent really missed and Lightning Greaves I havent seen yet since I've added it too the deck. I think it will do it's work like it normally does.

I understand the prowling serpopard :) I have the same, more and more people are playing control in our meta, so I might add him too the deck again. Or maybe even better, add a Cavern of Souls just so meren can't be countered. This way I dont have to use another spot in my deck. And meren can get everything that's being countered back from the grave I guess...