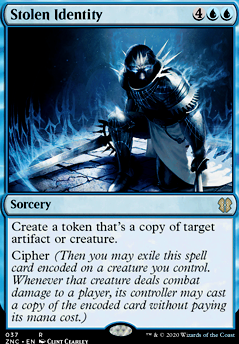 Create a token that's a copy of target artifact or creature.

I love your Talrand deck, I am thinking about building a lower budget version with the cards I took out of the main deck, many are extremely good, as your deck shows. I think you should consider some of the cipher spells, such as the 3 I run in my Talrand deck, because they can be token generating engines, as those extra cipher effects are casts. Stolen Identity can create 4 creatures in 1 turn, and another 1 each turn, with 2 and each afterwards being the best non-legendary creature.

Can we please have the ability to add tokens that are not directly made? If that makes no sense, the specific example I'm thinking of is with Ashiok, Nightmare Weaver and her -X. In that case, the ability to add in the "Clone" token (from Stolen Identity). The custom token looks bland, and sticks out of the board like a sore thumb.

Another request is to have the ability to have tokens made from sideboard cards show up. Outlaws' Merriment is a pain to operate when I have to make each token with the custom token maker, and even then, I can get confused about which is which.

Third, could the admins make it easier to tell which emblem comes from which planeswalker of yours? I have a deck with three Chandras, and all three emblems are labeled "Chandra" under the token selection menu.

I know that's a lot of stuff for one comment. Sorry!

TypicalTimmy on Legendary Rule - Does the â¦

I know that when you have a legendary creature out, and a 2nd copy comes out (barring exceptions such as Mirror Gallery), you must choose one of the two permanents and place them into the graveyard as state based actions check.

Is this considered "dying"? I'm asking because some, such as Kokusho, the Evening Star have death triggers.

So if I do something janky like Stolen Identity on Kokusho, and the token is moved into the graveyard, does the token "die" thus causing the life loss / life gain effect to go off?

To be clear, yes I am aware that the Legendary Rule states that the creature is not destroyed, nor is it sacrificed. These are two very explicit words that matter, such as Indestructible interacts with being destroyed, and some cards such as Assault Suit prevent sacrificing.

So in terms of the token copy of Kokusho being moved to the graveyard as per state based actions, that token copy is still dying, correct? So in a game of EDH that's still a -5 loss of life for all opponents and a +15 gain for me, assuming a normal 4-player pod, correct?