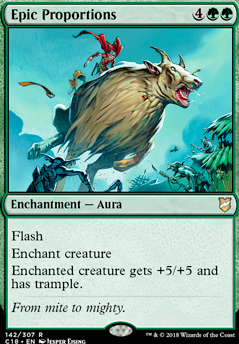 Enchanted creature gets +5/+5 and has trample.

Johan and friends
by Orange+

The Bubonic Plague
by LordD_Chaos

Read your deck help request -- sounds like you want to turn this into a voltron deck, where Omnath gets huge and tramples your opponents into the loam?

You'll also need to protect Omnath a lot more: Snake Umbra , Darksteel Plate , etc. And you need to be able to protect yourself with few/no blockers: Fog , Spore Frog , etc.

Last, you'll want to get Omnath as big as possible as fast as possible - and you need trample or it's all for nothing: Strata Scythe , Rancor ... Epic Proportions is particularly good for the flash; your opponents won't know until it's too late that 1/1 chump block meant their doom.

Epic Proportions OUT ---- Asceticism IN

Hi willarevalo_95, I really like your take on Tuvasa the Sunlit . To improve the deck you should be clear about your game plan and how you want to win. Obviously your budget is important for deck building as well. Additionally you should keep the meta in your playgroup in mind: Do they play creature heavy decks - throw in some boardwipes, do they tend to combo off in late game - play more countermagic and so on. With that said I'm going over the different card types in your deck.

Because your commander is based on enchantments I think the amount you run is fine, maybe throw in some more (looking at you Enchanted Evening ). But I would cut down Abundant Growth since it doesn't ramp you (put in Birds of Paradise instead, they will ramp into your commander) and put in one or two more Umbras to give your commander totem armor ( Octopus Umbra to boost your commanders P/T by 8(!) and Drake Umbra for some evasion). I would play Myth Unbound as well to reduce commander tax in case Tuvasa does get killed.

Here I would like to mention in the second ability of your commander. You get to draw for the first enchantment you play each turn so not only your own but on opponents as well. Thats why i would play some more cards with flash and cards that give your spells flash (e.g. Epic Proportions , Sigarda's Aid , Leyline of Anticipation , Alchemist's Refuge and maybe Vedalken Orrery ). Then you can maximize your draw.

Regarding lands, I would just add Alchemist's Refuge for flash and its up to you whether to cut a land and which kind.

Especially when you plan to play more with flash, your instants become much more valuable. Spot-removal ( Beast Within ), protection ( Heroic Intervention ), Countermagic ( Counterspell ) are some examples. But I think these are the moste flexible spots in your deck. Just pick what you think ist fitting.

I would at least play one more boardwipe, especially in white. Austere Command would be the best in your case because cou can choose to keep Tuvasa and kill all the fatties. Also blowing up all artifacts is just nice.

Cut Sol Ring , it doesn't ramp int your commander and just draws unnecessary hate on T1. Maybe put in Vedalken Orrery like i said, or go with the flavor and without artifacts ;)

Add your maybeboard for some blockers and early ramp. Cut some of your "put lands onto the battlefield" creatures to compensate for the cards I recommended. Also I would leave out Karametra, God of Harvests , maybe swap her for Kruphix, God of Horizons . You don't play that many creatures and don't need that much ramp as well. Kruphix is good for handsize, flash and leftover mana.

If you want to take a look at my Bant Enchantment List to get some additional inspiration, feel free: Estrid Enchantress

But keep the different commanders in mind, Estrid can play much more land auras and boardwipes due to her abilities.

I hope I was able to help you and I'd like to wish you a great day!

The bane of Rafiq voltron is chump blockers. You're pretty good on trample and decent on flying/evasion, but you have hardly any straight-up unblockable. Rogue's Passage , Amphin Pathmage , Prowler's Helm , Trailblazer's Boots , etc. All budget!

Also, Hammer of Nazahn is beast in this deck. (Enchantments with flash are also great like Epic Proportions )