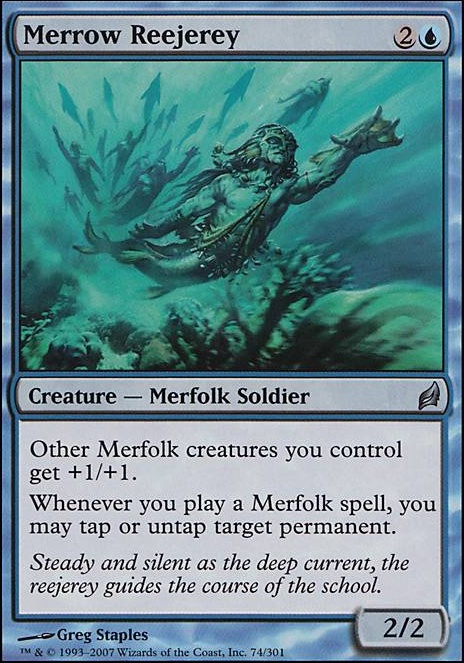 We ARE the power of the sea

Hello and welcome to my version of Kumena . After a couple iterations of the deck, and much playtesting, I believe this version is more consistent and powerful. It is a fun deck that requires focus, but it is worth it when you can hold back with a mediocre board to then just burst into the winning position. Beware! Once a playgroup knows what the deck can do, they tend to target you religiously. I'm a tribal lover at heart, and I've always wanted to do something with Merfolk. Finally, Ixalan gave us a good combo engine in the form of Kumena . Merfolk are good at controlling a board state until they need to rise from the sea and destroy the land dwellers.

While there is no infinite combo in here, there are ways of becoming so oppressive that it no longer matters.

Capsize is not only a great targeted removal spell, but untapping creatures every turn with Seedborn Muse / Murkfiend Liege while Cryptolith Rite and/or Earthcraft means A LOT of mana on multiple turns to take care of problematic permanents. I don't have a way to make infinite mana in the deck, but I can easily generate more than enough to force opponents to concede to this card.

Finale of Devastation - When used as a finisher, this will tutor out one of the lords I have ( Lord of Atlantis or Merrow Reejerey ) to then swing in with a horde of Merfolk.

I have a couple of "soft locks" in the deck that tends to make my groups scoop once enabled. I'd win eventually, but it just takes a bit of time.

This combo doesnt require Maskwood Nexus , but it will usually include it because it would be rare that I name "Wizard" with Reflections of Littjara . Reflections of Littjara naming Merfolk with Maskwood Nexus on the battlefield means that Venser will be considered a Merfolk when cast. Reflections of Littjara will copy Venser and the token will enter the battlefield. The token will trigger bouncing whatever I believe the problem is. Then, the original will resolve which will target itself, returning the original Venser to my hand to do it again when needed. With enough mana, or untapping every turn, I'm bouncing anything and everything to be able to swing in without hinderance.

Surgespanner and Crystal Shard can also fill similar rolls with less complication. Surgespanner simply bounces whatever I want to get rid of, but allows for their ETBs to resolve. However, it can hit lands too which is when people tend to scoop. Crystal Shard allows for the repeatable bounce-back with Venser to keep things off of the battlefield that I don't like.

These two together allow for "free" counterspells untapping every turn. My opponents would be required to cast three or more spells, or something uncounterable, to get past this.

This deck's main protection is through counterspells. I have debated on trying things like Asceticism or Swiftfoot Boots / Lightning Greaves , but in the end I can't seem to find a spot.

, Force of Will , Mana Drain , Muddle the Mixture , Pact of Negation

, Fierce Guardianship , and Swan Song are all easily understandable and staple counterspells in EDH with the exception of Muddle the Mixture . This is mainly here for the transmute ability for Earthcraft or Cryptolith Rite . However, it is still a counterspell nonethless.

Another "counterspell" that can be added to this list is Lullmage Mentor . Getting him online to be a free counter once a turn is a great feeling. Ertai, Wizard Adept fills a similar roll here.

Kopala, Warden of Waves is a mere soft counter, but still important. I've seen that the fact that he stops abilities is what helps out the most. He is also beneficial in the fact that he is easily tutorable with the majority of tutors I have in the deck. Svyelun of Sea and Sky fills a similar roll.

Teferi, Mage of Zhalfir - He is definitely considered protection so that I can do the things I need without worrying about interaction.

In Simic colors, there are some standard interactions in the form of Beast Within , Cyclonic Rift , Krosan Grip , and Capsize

. However, for the way I have built the deck (and the merfolk aspect) we have access to a couple more that may not be typically used in other Simic decks.

For the merfolk aspect, we have Surgespanner . This card has become targeted immediately in my playgroup because he just doesn't stop when I can untap him every turn. I can use him at instant speed with Earthcraft , Cryptolith Rite , and of course with the commander himself, Kumena . He can also be categorized under protection since he can bounce any permanent which can save my things as well if needed.

For the fact that I am untapping as much as possible (plus the "wide" aspect of the deck) Nullmage Shepherd is a great addition. Getting four creatures isn't extremely difficult, but you simply cast her as the fourth or more to get at least one use. If she stays, your opponents won't have much left.

This deck doesn't tend to get far without being able to untap more than the game normally allows. I have included multiple forms of this for redundancy and to ensure that the deck will be able to abuse the combo creatures to take the lead.

Seedborn Muse - Untapping everything is just so powerful. Creatures to continue the combos, and lands to hold up countermagic. She doesn't tend to live long.

Murkfiend Liege - Apart of the redundancy package. He's only creatures, but in this deck that is powerful no matter what. The buff on my creatures is a great bonus as well.

Quest for Renewal - The "restriction" for this card is too easily achieved with Kumena . I can usually get the four counters the turn this card comes down.

Merrow Commerce - Even though it only untaps in my end step, that one extra untap has shown its power. It can also be tutored with Seahunter which allows for extra tutors if Maskwood Nexus is on the battlefield.

is definitely not known for tutors aside from the staples ( Worldly Tutor , Long-Term Plans , Chord of Calling , and Mystical Tutor ), but merfolk allows for a couple more that are quite helpful.

Seahunter - Combos with Maskwood Nexus to tutor any creature card in the deck. Amazing feeling to tutor a Frilled Mystic or Venser, Shaper Savant and my opponent doesn't see it coming.

Forerunner of the Heralds - With an Ixalan tribal comes a creature tutor. This one is better than the original Merrow Harbinger because she can become bigger to attack or block if necessary. Also combos with Crystal Shard to continue the tutor if needed.

Herald of Secret Streams - This card was taken out quite a bit ago because 1) I rarely use the ability for +1/+1 counters with Kumena (my opponents try to wipe my board whenever they see 3+ merfolk) and 2) I tend to wait to attack until I can get Craterhoof Behemoth . I haven't missed him as of yet.

Seafloor Oracle - This one was just taken out as he was one that I tend to hold onto because four mana was more than I liked for a merfolk without an instant board presence. I am keeping him in mind (in case I miss him), but I'll need more playtesting to see whether or not I want him back.

Arcane Adaptation - Don't get me wrong, a great card. However, I feel Maskwood Nexus fills this role better being that it can create other merfolk for me. I don't believe I need two of these effects, but we'll see if I miss it.

Mystic Remora - This deck doesn't need it. I need my mana to start strong to get my combos up and going. Until late game, I won't have the mana to continuously pay for it, and by then I'm either winning or this won't help me comeback.

Tatyova, Benthic Druid - While a great Merfolk, she is more of a build-around, not an add in. I can draw well enough in this deck and she's an expensive Merfolk that doens't immediately impact the board. I tried her in the past, but I felt like she was too clunky to keep in.

Thanks for taking a look at my merfolk deck! I am more than open to any suggestions, feedback, or criticism.

Kumena would tap that SO hard.