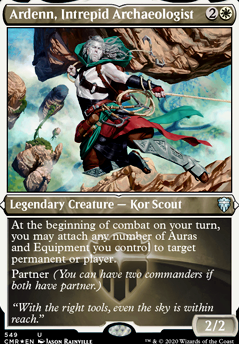 Seeing what a Boros artifact voltron deck looks like. Shrug. The game plan is linear and uncomplicated:

Step 1: Play Akiri, Line-Slinger.
Step 2: Load her up with a bunch of equipment.
Step 3: Smash face and win with commander damage.

And that's that! Beyond Akiri and the equipment, the rest of the deck exists to assist with the above voltron strategy - some ramp, protection, evasion, spot/mass removal, card draw, tutors & recursion. With Commander Legends introducing 40 partner commanders, the time to experiment a bit with this deck had come. I really enjoy the Boros premise and build of this deck so without changing a single card in the base brew, I tried swapping Akiri & Bruse out to give Ardenn, Intrepid Archaeologist & Rograkh, Son of Rohgahh a try. It was a fun little change but ultimately I found Akiri more effective than Rograkh with the cards I've got in here. Ardenn on the other hand, yeah. Just...Yeah. Free equips ready for the taking in the command zone is exactly what Akiri wants. Although the potential of Bruse's doublestrike slams were certainly a threat, he's a non-bo with the 'protection from ' swords paired with the fact that he's often just not needed - I've closed out many games without ever having the need to cast him.

So that's that. Bruse is off to retire from battle and stick to herding for a while. Oh and while I'm here, A NEW SWORD! YES!! This doesn't have a ton of symmetry with my deck beyond Stoneforge Mystic, however it is part of the sword cycle so I've crammed it in here on principle.

Akiri and Bruse, and their flying moose