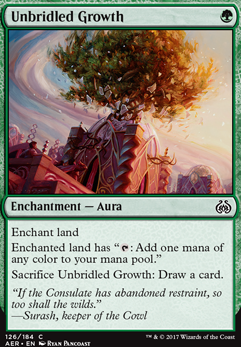 Enchanted land has ": Add one mana of any colour to your mana pool."

Control for people who hate control
by Goblin_Guide

Twice the Enchantments, Twice the Fun

I'm not sure what your budget is like, but a few really helpful Auras are Rancor, Aspect of Mongoose, and Whip Silk, since they can all be replayed multiple times. Ordeal of Thassa and Ordeal of Nylea can both be helpful and pop-off early since your creatures will likely already have counters on them.

Simic Sky Swallower is okay as a beefy body, but can't be enchanted. You might be better off with something like Nylea's Colossus or Prime Speaker Zegana, both of which synergize with enchantments & counters.

If you're interested, check out my Eutropia deck, WAP- Wet Ass +1/+1 Counters. I built mine more around +1/+1 counter synergies with Auras.

If youâre going to be running estrus you really need more ramp effects like Fertile Ground , Utopia Sprawl and Unbridled Growth to take advantage of her +2 ability. If youâre not then itâs better to replace estrid with another enchantment or tutor like Idyllic Tutor .

Ooh, likewise with protection Lightning Greaves and Swiftfoot Boots are another two staples for commander protection.

Another devious ploy I have is if someone is running a mono color deck, for some reason, you can run Illusionary Terrain or Reality Twist . In fact, cumulative upkeep cards are typically good in Muldrotha decks, since you can always recur them if the upkeep gets too high and just play them out of the graveyard. Mystic Remora . Or just a Rhystic Study .

Tormod's Crypt is some nice 0 mana recur-able graveyard hate, if needed in your playgroup.

I have also had a good time with Sultai Ascendancy , and other draw filters. Eternal Witness is another great card to bring back instants and sorceries. Another overperformer is Unbridled Growth , which not only helps with mana filtering, but is a consistent pay one draw one ever turn.

Having general protection stuff is good too: Propaganda . Imprisoned in the Moon and Song of the Dryads can permanently lock out some commanders, and unless they can kill them in response, they don't even get to go back to the command zone unless they have enchantment or land removal (good luck red).

I have my own Muldrotha deck, Finalized Muldrotha, if you want to take a look