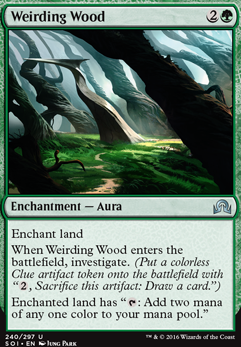 When Weirding Wood enters the battlefield, investigate. (Put a colourless Clue artifact token onto the battlefield with ", Sacrifice this artifact: Draw a card.")

Enchanted land has ": Add two mana of any one colour to your mana pool."

Thanks so much for your praise and suggestions :)

I havent actually been able to playtest this with my playgroup yet, so Im not quite sure what to add, cut, or fix yet. It might be a good idea to do more enchanted lands for ramp, but in this first version I've tried to stick to auras that cost 2 mana or less. For this reason, I havent really considered enchanted lands like Weirding Wood. On the other hand, I am already playing Wolfwillow Haven ;)

I'll check out your deck as well!

I love what you did with your Sythis on such a short budget! You made this deck to the point and kept your commander in mind when placing your cards, I might steal some of these ideas for my own Sythis!

My only suggestion is that if you're trying to storm with the commander's ability, you might want to turn 2-3 of the more expensive hexproof creatures in to more ramp like:

You have enough protection and you've balanced the deck really well; I am amazed at how well that looks while being under 100! I'd love it if you could give me a few pointers on my Sythis if you have a second: Punching in Pillow Fights. My deck ia a little more expensive but I think, by the looks of it, you're more than capable to be of help^.^

Managed to get a couple games in. The Lands stuff worked out nicely (Tabernacle is good in EDH it turns out). I was able to do Strip Mine loops in both games and ride that to victory one way or another.

Enchantress I'm still waiting to see. For now I'm adding a couple things that I felt I wanted and cutting cards that seem slow. After the first few games against more competitive EDH people it turned out that you can't really just spend 7 mana to not effect the board, so Zendikar Resurgent got cut.

Twice the Enchantments, Twice the Fun

I'm not sure what your budget is like, but a few really helpful Auras are Rancor, Aspect of Mongoose, and Whip Silk, since they can all be replayed multiple times. Ordeal of Thassa and Ordeal of Nylea can both be helpful and pop-off early since your creatures will likely already have counters on them.

Simic Sky Swallower is okay as a beefy body, but can't be enchanted. You might be better off with something like Nylea's Colossus or Prime Speaker Zegana, both of which synergize with enchantments & counters.

If you're interested, check out my Eutropia deck, WAP- Wet Ass +1/+1 Counters. I built mine more around +1/+1 counter synergies with Auras.