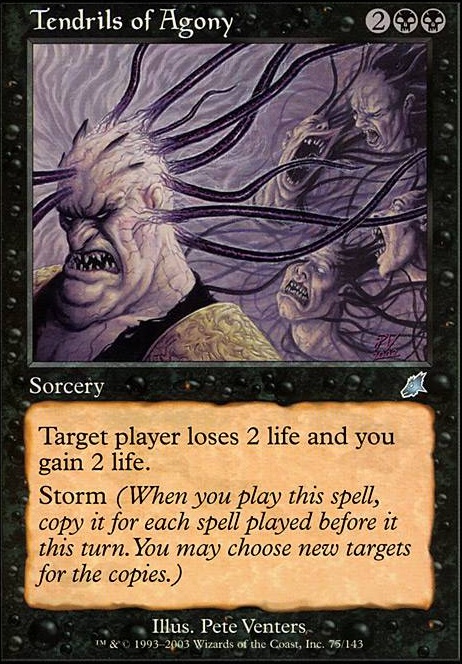 Live long and Prosper
by death_puppit18

Tendrils of Agony used to be in the deck right? why no?

JW398 whoops I thought I had responded. I think on first glance that Empty is still probably just better than Nutshot, but idk. I actually haven't had lots of Leylins against me, mainly just things like Rest in Peace and Relics. But I might sideboard one of those now, especially if Blossoming Calm sees play (why did they print that and not give us Tendrils of Agony , like seriously I'm kinda bugged). But yeah if you do any testing with it definitely let me know. But Empty making twice the amount of goblins is nice, even though Nutshot is easier with Breach.

On another note, Underworld Breach , wow was I wrong about that card. It's a powerhouse haha. Just finished my first FNM with two in and it was sweet.

TheVectornaut on will all cards cast by â¦

The question linked below is essentially the same as yours. The answers should give you an idea of how Mizzix's Mastery works with Thousand-Year Storm . Adding an actual storm card doesn't change things that much. Mastery copies will contribute to storm count just like 1000 year storm count while copies created by either storm will not contribute to the count of either storm. Assuming Mastery is the first spell you cast in the turn and you order things so Tendrils of Agony is cast last after 23 other spells in the yard, I calculate the total number of spells or copies you can potentially resolve that turn to be 1+(2+3+4+...+24)+(25+24) where the 1 is Mastery, the middle component is the 23 GY spells, and the last 49 are all Tendrils. I haven't done summations in a while, but that looks like 349 to me.

Asked by AwesomeOctopus 1 year ago

evilphifel on will all cards cast by â¦

lets say I cast 23 cards from my graveyard with Mizzix's Mastery and then after the all resolve cast Tendrils of Agony will i then get 23 copies. if Thousand-Year Storm is in play will I get 23 copies from that one as well? making it 47 including the original copy?

This is the creative nonsense I love! How do you feel about Grim Haruspex for card draw, Tendrils of Agony as an alternate wincon and/or Bitter Ordeal as sideboard material?

You have an average CMC of 4(2.6 if you include lands). That's pretty high, and you have one low mana rock. You definitely have ways to get tons of mana, but they tend to be 4 or more mana, often they're 6 mana.

Personally, I'd want to ramp hard into things like Caged Sun and Crypt Ghast , and then use the huge amount of mana with card draw spells to draw extreme amounts of cards.

So I'd recommend the cards Dark Ritual , Cabal Ritual , Sol Ring , Mind Stone , Songs of the Damned , Charcoal Diamond , Worn Powerstone , Thran Dynamo , and Culling the Weak . You could have lines like turn one Dark Ritual, Worn Powerstone, and then cast Crypt Ghast turn two. You'd have 8 mana on turn three if all your lands were basic swamps. Of course that's a nut draw, though, so don't expect it every game.

You can then wield one-shot draw effects like Read the Bones , Sign in Blood , Night's Whisper , etc. and add to your repeatable card draw effects with Greed and Arguel's Blood Fast Â Flip.

Also, I'd really recommend Tendrils of Agony , because after casting several spells in one turn with all your mana, you can cast it and do a bunch of draining. It is possible to oneshot the table with this, but it's difficult unless you're explicitly trying to.

You'll also want ways to fill your graveyard for Agadeem and such effects, but I don't have suggestions on that right now.