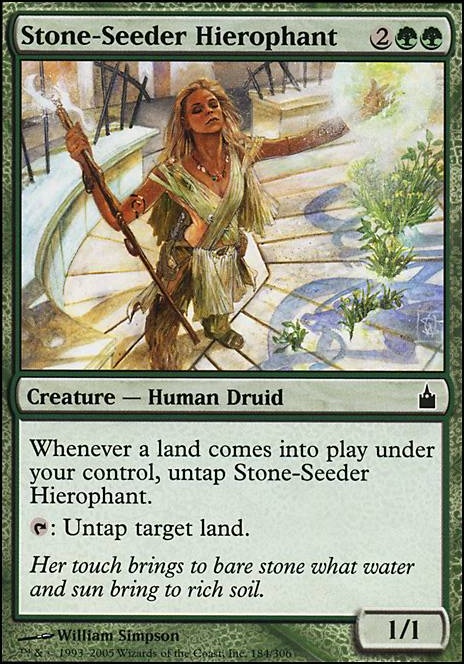 Whenever a land enters the battlefield under your control, untap Stone-Seeder Hierophant.

Stone-Seeder Hierophant can also be another lotus cobra, essentially. And it can untap fetches or utility lands that come back tapped with splendid rec/world shaper, in order to fuel a huge turn.

Not sure if it fits your restrictions, but i thought iâd mention it because i enjoy it a lot.

Rampaging Baloths was taken out for Stone-Seeder Hierophant for being able to abuse landfall to generate more mana essentially doubling our mana per turn.

Whispersilk Cloak for Arcane Signet . Originally wasn't going to have any mana rocks period but realized that one is actually beneficial.

Freed from the Reel for Swan Song. Still play testing with and without this enchantment. It's a great combo piece but like interactions too.

None of these swaps are 1:1 just what I took out cuz I needed a certain other thing. Still testing this deck and tinkering. Will be updating the primer when I can get a spare hour or 2 to update it.