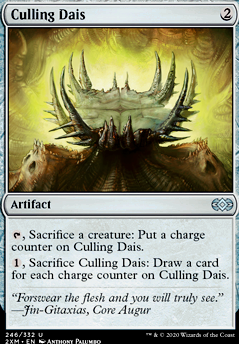 , Sacrifice a creature: Put a charge counter on Culling Dais.

Culling Dais occurrence in decks from the last year

Alesha, Who Smiles at Low Prices
by thumbs14

Thanks Funkydiscogod! Culling Dais was exactly what this deck needed - an early zero-cost sac outlet that also draws you cards once you get to the mid-game. Perfect!

Kogarashi on Does sacrificing a creature as ...

Dictate of Erebos is still a game effect requiring you to fulfil it (sacrificing a creature). You can't sacrifice a creature to both that requirement and a different one (cost of Culling Dais). Raging_Squiggle's vending machine analogy is an excellent example.