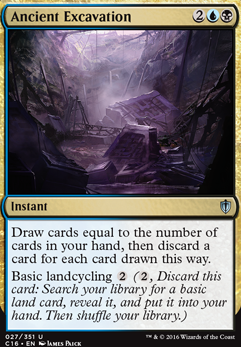 Draw cards equal to the number of cards in your hand, then discard a card for each card drawn this way.

Basic landcycling (, Discard this card: Search your library for a basic land card, reveal it, and put it into your hand. Then shuffle your library.)

Ancient Excavation occurrence in decks from the last year

Atris, Oracle of Reanimation
by Pageofheart 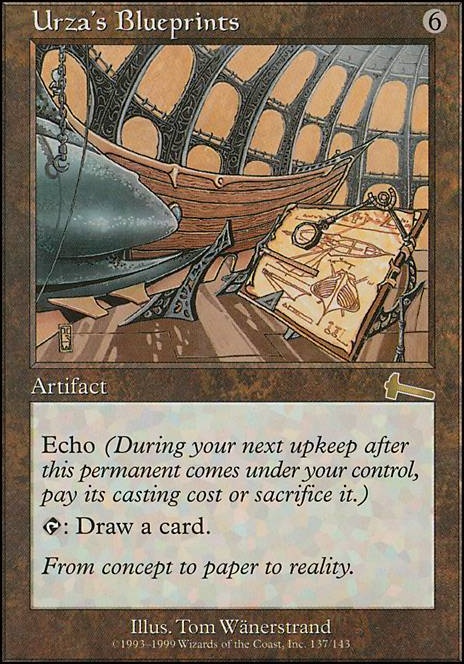 I'd run Preordain over Impulse, Gamble over Fabricate, and Ancient Excavation over Dark Deal. Thought Scour seems kinda weak overall, and if you could fit a Codex Shredder and a Scrap Mastery to play off each other while dumping into Krark-Clan Ironworks between iterations, I'm sure you'll have a great time.

I added the cycle lands to the deck which aids its speed. The cycling takes care of enough of the card draw to make Ancient Excavation not needed. Decree of Pain is a powerful tool but I am trying to keep the deck budget and that is slightly out of my range. I added some others to the sideboard. Thank you for your help.

I think a more streamlined version of this deck runs around 30 lands for sure. To get there you really need to have Mana Crypt over Hedron Archive , Vampiric Tutor over Increasing Ambition , Wheel of Fortune over Ancient Excavation ect.. I definately make some budget concessions on artifact ramp and tutors that make me wary to cut the lands too low. 35 has felt right for what this deck is working with but with the new mulligan I am looking to trim a bit.

@multimedia, your comment is much appreciated! A lot of thought and play testing has gone into this deck (if Iâm being honest though, this isnât the first attempt as this is around the 8th iteration of scarab god due to play testing and not posting until now LOL).

I want to preface my response to your recommendations by saying that lowering the cmc of the deck is not really a priority as I usually have more than enough mana to do, but bringing down the amount of 5 drops and just generally increasing the tempo of this deck is on my radar. Furthermore, some inclusions (such as Consuming Aberration and Noosegraf Mob ) are in response to the meta of my table wherein they perform well (for example, one of my buddies plays an interesting Alesha, Who Smiles at Death homebrew that focuses on controlling the board state by altering base power/toughness of all creatures, Consuming Aberration on its own has saved my hide more times than one against Alesha lol).

Moving onto your recommendations:

Just the concept of Wonder alone is fantastic and it was even a part of the original iteration of this deck, but during playtesting (and this might just be me being unlucky) but it was often a mid-game dead draw and when I would have it in my graveyard, having a handful of flying zombies was nice, but not often game ending â hence non-inclusion. Grimoire of the Dead is slow AF and it the second eff is not easy to pull off, the only reason it is in the deck right now is I do not have a Rise of the Dark Realms , not sure what I will replace it with yet but I will take it out.

I like Windfall , it is a great wheel and I would like to include it. As it is right now Ancient Excavation is a card I keep in for the versatility of both self-mill and the basic landcycling, although I might swap it out for the Lim-Dul's Vault that you brought up later in your comment (I really like itsâ effect tho).

Diabolic Intent is a good card and that I plan to add in someday, but just to save $ Iâm looking at Wishclaw Talisman as a budget alternative with some inbuilt politicking mechanisms. When it comes to Exsanguinate , it was a filler card I tossed in for play testing Iâll replace it with the aforementioned Wishclaw Talisman most likely

Relentless Dead is a card I used to have in here but I removed it since it felt slow and I just never really utilized the secondary eff Iâm looking at getting a Gilded Drake in as a replacement. I agree though that Noosegraf Mob , as a six drop, is quite lackluster in comparison to the other high cmc cards. The potential value of 6 ETBs and/or death triggers is enough to keep him around for now, but if there is something I find I like more Iâll probably take mod out.

Graveborn Muse I tested it out and saw myself dying to it more often than not, if I move further away from the zombie tribal aspect I might reconsider it. As for Liliana's Reaver , It isnât to flashy but it works, no need to remove it rn but if anything better comes along I might.

Commander's Sphere is place holder card that I had socketed in while I was looking for some better mana rock options. Thanks for bring Arcane Signet to my attention, Iâll probably toss that or the signet in.

Arcane Denial isnât a card Iâd normally consider since the +2 for my opponent kind of hurts, but in a format like EDH with the 99 filling up a library, it seems pretty negligible so Iâll add it but wonât remover Countersquall since Its not that hard to get either {B} or {U} mana on demand. This though does touch on a different subject, I do want to add in some more counter magic, tutors, and removal (Iâm looking at Arcane Denial , Swan Song , Pact of Negation , Mystical Tutor , Mastermind's Acquisition , Cunning Wish , Death Wish , Wishclaw Talisman , Victim of Night , Hero's Downfall , Murder , and Doom Blade but am stuck on evaluating which are the most beneficial inclusions).

To wrap up, thank you very much for your input it has been really helpful in reevaluating this deck. I sure do have some tinkering to do, haha. The nature of deckbuilding in EDH to me is everlasting and I hope I can continue to improve and refine my decks with recommendations and insight from other kind folks, like you, on this site :D

One last question, a friend is considering selling their Mana Vault to me at a discount, is this a card that I should seriously consider including or not?