Each player exiles all artifact cards from their graveyard, then sacrifices all artifacts they control, then puts all cards they exiled this way onto the battlefield.

Scrap Mastery occurrence in decks from the last year 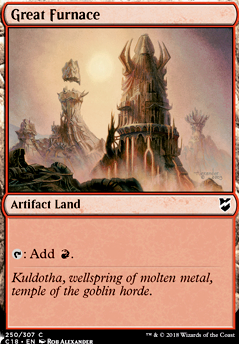 Woah, Zirda is strong. Might be the strongest Boros commander to date.

Also, I am a fan of the new ultimatums so far. They all seem pretty powerful. That Abzan one is nutty. I can get behind a Replenish+Scrap Mastery+Rise of the Dark Realms+Splendid Reclamation targeting only my graveyard.

I'd run Preordain over Impulse, Gamble over Fabricate, and Ancient Excavation over Dark Deal. Thought Scour seems kinda weak overall, and if you could fit a Codex Shredder and a Scrap Mastery to play off each other while dumping into Krark-Clan Ironworks between iterations, I'm sure you'll have a great time.

For whatever reason the sections in your comment refuse to expand, no matter which computer/browser I'm using. At the very least I can see the cards you suggested including.

I'm still not a fan of Confusion in the Ranks , however. This deck is so meticulous about achieving a consistent board state via draw and tutors, I wouldn't want to risk an opponent snatching something vital that I spent resources obtaining. Also, at some point I actually DID run Sunbird's Invocation , but that's really only so effective in a deck with low average CMC. It's better in big mana decks imho.

Also, the decision to make the deck entirely permanents was deliberate. I tend to run low instant/sorcery counts in a lot of my decks anyway, but here I opted for MAXIMUM DURDLE. Still, I listed some of the ones I'd otherwise include in the Maybeboard, because I know my peculiarities aren't universal and if someone else were to build a similar Norin, they'd likely include things like Chaos Warp , Scrap Mastery , etc.

I also have a bit of an OCD when it comes to cards with old-school borders/backgrounds. Simply put, I can't play them. It wigs me out. I know it's dumb and irrational, and gimps me from using some really powerful old cards in my deckbuilding; but it's also forced me to get creative in finding ways to achieve similar effects using more modern cards (even if they're often slightly less cost-efficient).

Colour me confudled Is it just a Scrap Mastery deck?