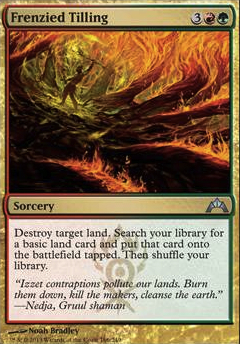 Destroy target land. Search your library for a basic land card and put that card into play tapped. Then shuffle your library.

This Land is Your Land, That Bolt was My Land
by randomado 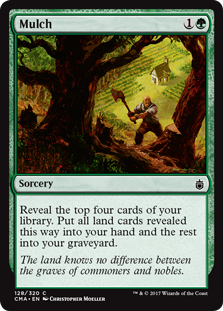 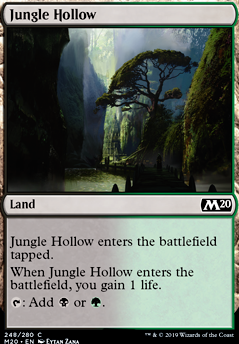 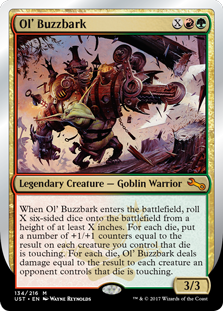 Experiment One > Birds of Paradise; if you plan to cheat the Level Up costs then Birds is not as needed while Experiment will evolve with nearly every other creature you cast.

Search for Tomorrow > Nature's Lore; Nature's is slow but maybe suspending could be better because it will come down when an Evolution Sage is present? Or Explore is an option too that cantrips. Or or Arboreal Grazer !

Frenzied Tilling might be good in the side board for land hate + ramping ability.

Crop Rotation can be ramp, depending on what land is fetched. Dawntreader Elk, Deep Reconnaissance, Diligent Farmhand, Edge of Autumn, Embodiment of Spring, Font of Fertility, Frenzied Tilling,

Might is suggest Exploding Borders, Frenzied Tilling and Trace of Abundance as multicolored ramp options? Although they are a little slower then Kodama's Reach and Explosive Vegetation, I feel the colors make them a much better late game draw when you are looking to get counters on Ramos.

If you are looking to win primarily from commander damage i've found Shu Yun, the Silent Tempest a powerful addition.

Although Spelltwine is monocolored and somewhat expensive, I find most of the time you can recur enough color of spells to make up for its casting cost. lastly giving rebound with Cast Through Time or Narset Transcendent can get you double 'cast' triggers in addition to copying the spell (this works great with the multiple modes on the charms as you may want to change the spells effect the second time you cast it).

You play red? You should play Lightning Bolt. Very few decks that play red can afford to not bring good old bolt, because 3 damage, any target, instantspeed, 1 mana, is one of the best and most versatile cards in the whole format.

Frenzied Tilling should probably be changed into Mwonvuli Acid-Moss, and some number of lands into Cinder Glade. Actually, that should be Gruul Turf. Goodbye, turf. Bounce-lands are good if you have a specific use for them (that would be anything involving Amulet of Vigor, but as a way of accelerating mana, they are horrible, and what's worse is that they are a real liability in a world of Ghost Quarter and Field of Ruin. On the subject of lands, there's not much use for Unknown Shores in a deck with only 2 colors.

If you want more ramp, have a look at Search for Tomorrow. I'm much in favor of land-based ramp, rather than creature-based, since it's harder to disrupt (almost all decks have some kind of creature removal mainboard, but a lot doesn't have anything against lands mainboard, and even if they do, there's less landdestruction than creature removal). And if you go with a more land-focused ramp-strategy, you get to play cards like Anger of the Gods, without shooting yourself in the foot (that one really keeps some of the fast strategies at a manageable level).

Watch it with x-cost spells. They really aren't great in modern (the format is too fast to allow you much time to build up bunches of mana). Just a couple for late-game should be fine. Oh, and a really strong x-cost spell? Bonfire of the Damned.

Your support-enchantments are way too many. Several of them doesn't do anything on their own, so you really would have to draw them after someone has played a sweeper. If you want some ramp from enchantments, you could consider Utopia Sprawl.

Cards to consider: Bloodbraid Elf. Cascade is better than you'd think, and I imagine that it would be really cool to go cascading into Domri Rade. A single copy of Nissa, Vastwood Seer

I'm looking at a few different options for my LD package;

I'd like to know what you think, perhaps you've some choice cards I've missed

JuiceboxHero wow Frenzied Tilling is a cool card! I could definitely afford to switch out Ixidron or something else for a copy of that. Thanks for the tips. Ixidron can be good since he doesn't flip tokens, and with Riku out I'd also have a ton of token copies out, but you're right since he could mess up Riku in that transition

SirSh4ggy - Really like the idea of copies and enter the battlefield effects (which copies are always good for). Good mix, in my opinion.

There are great cards here, but I'm curious about the inclusion of Ixidron as this can potentially hose you on your end as well (as I've seen it used in play) if your opponent(s) have any way to bounce him. Most specifically, your Commander being face down prevents you from utilizing him any further if you're forced to play it while he's out.

As for Art/Ench destruction, a good cheapo is Destructive Revelry. Given that most people tend to run special lands that do X annoying thing, GR give you another fun ramp card with the added benefit of targetted land removal in Frenzied Tilling