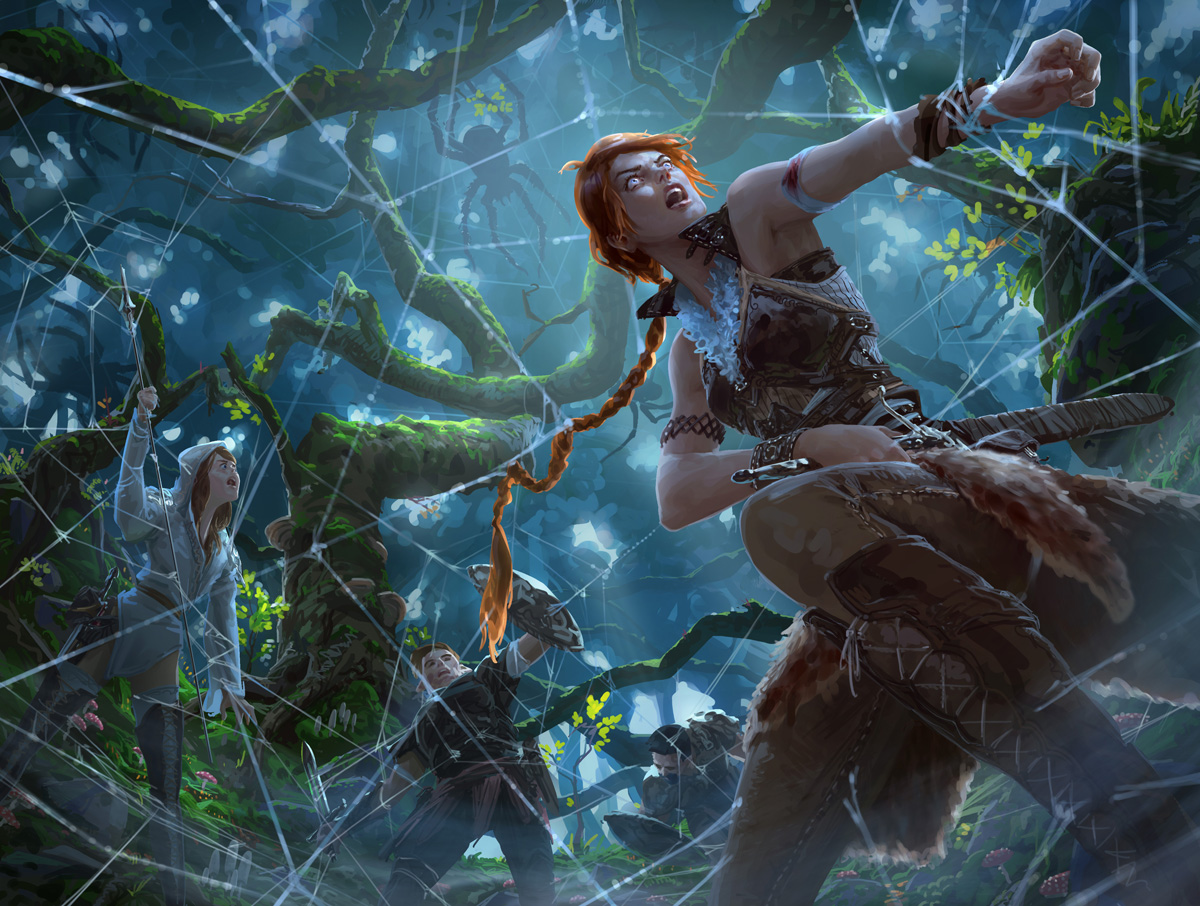 Welcome, friends, to my home. Feel free to look around, but don't get too entangled...it might not become you well.

Wait a second, there's no reason to insult your friend's mother, I'm sure she has a great personality.

No, I meant nothing by that. Why would I? I don't even know her.

Dude, this really wasn't necessary. Why would you say such a thing about a friend's relative?

Wow, you're sure you're actual friends? I wouldn't anyone let me call THAT. 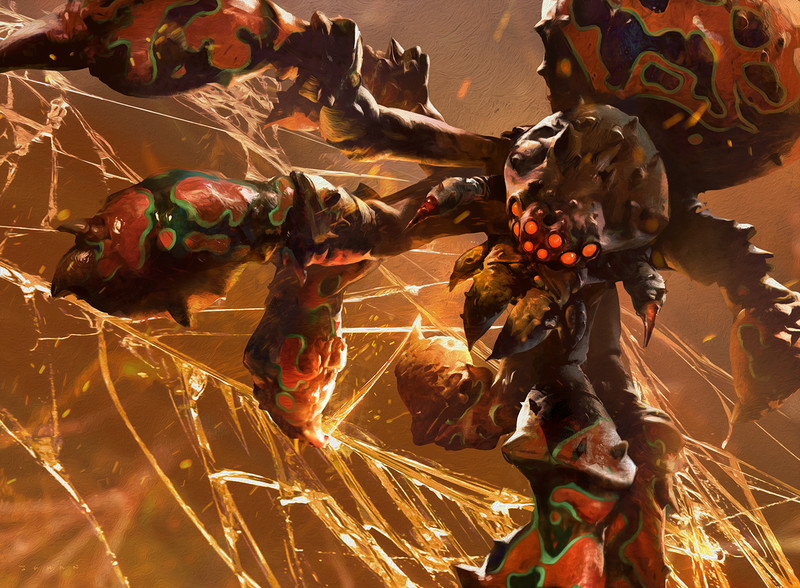 Thantis is a commander I've wanted to build for a long time. Our ginormous spider-friend is just great at subtlety and riling everyone up, all the while protecting herself with vigilant creatures, fogs, lifegain, and a habit of massively gearing up if anyone dares to attack her. The deck is a Jund deck per excellence: It plays creatures, it plays interaction, it attacks. We want long, grindy games. And you know what: Those are the best games. So get ready to Jund'em!

The deck has multiple anthems and a bit of equipment to make our creatures more dangerous to attack with and/or into. Zagras, Thief of Heartbeats and Bow of Nylea give Deathtouch. Garruk's Uprising gives Trample in addition to being card draw. Angrath, Captain of Chaos and Frontier Warmonger give Menace, and Challenger Troll gives Stalking (which isn't keyworded, unfortunately). The latter two combine to make creatures with power 4 or greater unblockable. Rhythm of the Wild isn't an expensive uncommon without a reason: Either growing creatures or granting Haste is powerful. Dormant Grove Â  had me ecstatic when it was spoiled, as an anthem granting Vigilance within Jund colours is unusual, but oh so needed for Thantis. 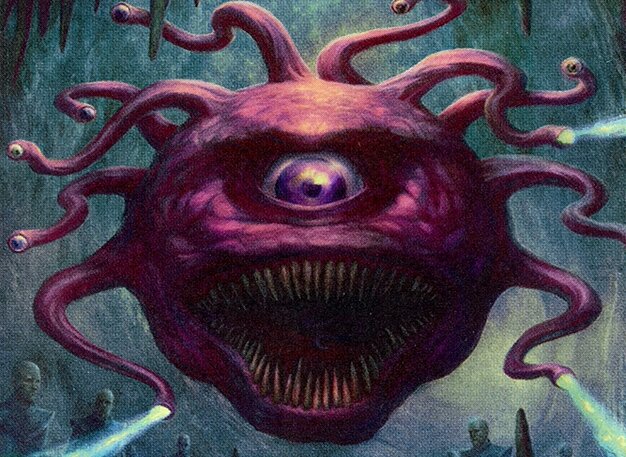 To win a grindy game, we need lots of card draw. Sapling of Colfenor draws me quite a few cards and is a great blocker when it gets Vigilance. Karazikar, the Eye Tyrant will usually easily goad three creatures each turn and thus will draw us lots of card. Runic Armasaur has a special place in here: abilities are Thantis' biggest weakness, as they allow creatures that would propably die in combat to simply not attack by using their . While Thantis limits their usage to main phase 1, it's still annoying when these pesky tappers just won't die. With Armasaur, at least I get to draw a card off of these activations. Also, five toughness is totally fine to attack with while easily surviving. 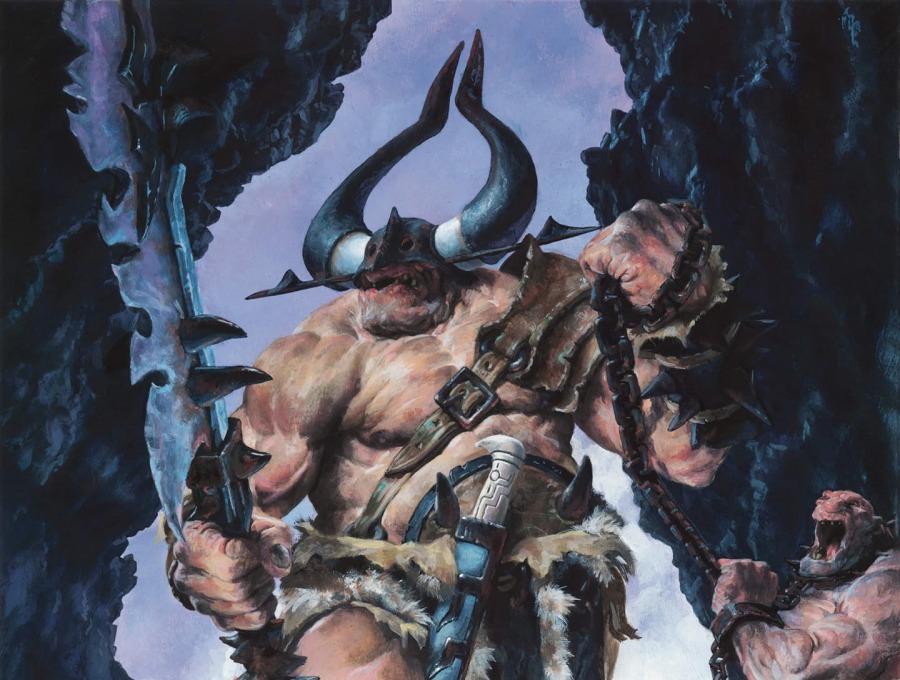 We'll need to survive a table that attacks basically everywhere, so lifegain is somewhat important here. As the deck has lots of collosal beatsticks, Verdant Sun's Avatar and Ikra Shidiqi, the Usurper gain tons of life. Another important part are creatures with Vigilance, so I can block while having to attack: Yurlok of Scorch Thrash is a tough attacker, a good blocker, a great ramp card and an additional source of damage. Gorm the Great helps to get attackers through and blocks most attacks, while also searching for Virtus the Veiled, who can really help to speed up the game. Warden of the Woods is another durable vigilantee than can't be targeted without drawing me cards. While Kazuul, Tyrant of the Cliffs doesn't have Vigilance, it is a red Propaganda, and just ridiculous with Zagras. Grave Titan puts 10 power down on entering the battlefield, and it brings two new blockers with every attack. Quartzwood Crasher similarly can put out blocker after blocker. And thanks to some equipments granting vigilance, we can turn all other creatures into blockers, as well. Finally, I added Frenzied Saddlebrute. With Thantis out, he forces each and every creature to attack my opponents, so that I can crash in unblocked.

The interaction is intended to be very versatile, but has a special focus on grave-hate both pure and stapled onto other effects. The deck wants to produce grindy games, and graveyard-decks are almost always the best at grinding. To give us an edge against them, we need to hinder these decks from going off. Beyond that, there are some cards that are just great here: e.g. Hellish Rebuke can basically be a selective wipe if are are willing to take some damage. Shiny Impetus conveniently combines ramp, removal and hopefully some damage to my opponents. Bloodthirsty Blade can change targets to keep dangerous critters away from us. Froghemoth is an awesome gravehate card that grows pretty big, pretty fast.

Ok, so this is my take on Thantis. I've tried to build her a million times, and finally, I like the result. I appreciate each and every piece of advice and feedback, so please leave a comment and maybe an upvote if you like what you see.

I just bought the Planar Portal precon and did some updates. Besides exchanges some lands and adding Bojuka Bog for even more grave hate, I made the following changes:

Thanks for your attention ;D

The war goes on.