: Put a creature card exiled with Sisters of Stone Death onto the battlefield under your control. Sisters of Stone Death
by PythagoreanBeanMachine 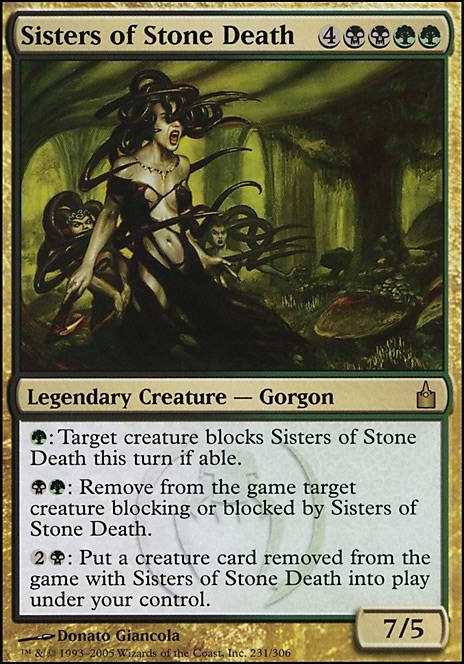 trying something on my own
by badjiujiu 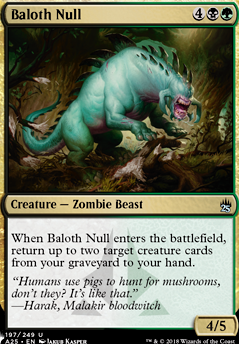 Exile for fun and profit
by Dragonstorm02

0 Tap up to two target creatures

-1 Exile up to five cards in a graveyard

Take another legendary creature from a different guild in the original Ravnica and make a guild mechanic planeswalker. I believe Vraska the Unseen was inspired by Sisters of Stone Death but I could be wrong.

Love the design, as I've wanted to build Sisters of Stone Death for quite a while. But I noticed something: You keep on using the wording "whenever ~ destroys a creature", but there's actual defined meaning to that. Is it meant to be the Sengir Vampire ability? Would giving her a pinger ability plus deathtouch count? How about combat? Fight spells? Nobody knows. What counts as "agency" of the creature?

Lookin' in again to let you know I still didn't get a single game in, but am nonetheless excitedly tuning my list. I just added Sisters of Stone Death in hope of stealing some creatures if anyone ever dares attacking me. Did you find any new interesting pieces for our common eight-legged friend?

So, in the Kethis, the Hidden Hand deck, the multicolored legends who care about legends are -Arvad the Cursed and -Captain Sisay, so I'll make a Legend to complete the internal cycle.

Sisters of Stone Death is the character depicted.

Sisters of the Statuary

, Pay 2 life, Put the top three cards of your library into your graveyard: You may exile a legendary creature from a graveyard, if you do, create a token copy of it, except that it is a noncreature artifact, in addition to any other types.

I'd like a Common equipment that cares a about a tribe without any tribal equipment currently (Knights, Rogues, Humans, Legends, Soldiers, and Wizards all have some I'm sure, I think there's others with Tribal equipment, though).