: Choose a creature card at random from target opponent's graveyard. Put that card onto the battlefield under your control. Tirelessly Understanding The Game
by K-Logic

Kaalia of the Vast EDH (Casual)
by ALBINOLIGHTNING 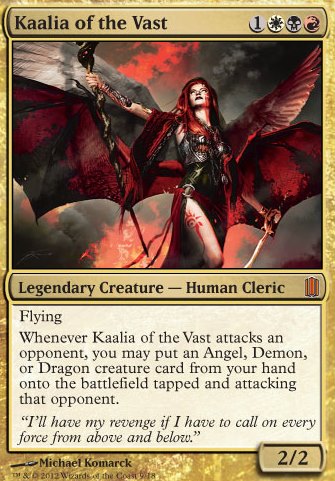 Brong, Who shall save the world

+2: Until the end of your next turn, ~ becomes a 7/9 Legendary green and red creature token with trample, haste and indestructible

-7: You may have each creature you control fight target creature your opponent controls, then destroy target land

Firstly I'd like to say I love that centaur card, it's so perfect and cool Ulinto

Secondly this is one of those cards, that has a really cool character who looks like they could take on the planet all by themselves, and has some really great abilities and then they just suddenly suck. Like Tariel, Reckoner of Souls it's a great card with a cool ability and then you look at the mana cost and it sucks

Anyway do the previous challenge of any vehicle, then we should be up to date

I did a little playtesting with Kaalia, Zenith Seeker at the helm. In the first game, I started with Kaalia of the Vast in my hand and was able to win with the Worldgorger Dragon combo on turn 7, which is pretty good for our casual setting. Even without the combo, I'd already done enough damage by this time to take out one opponent. In the second test, I tried to use Doom Whisperer to dig for this combo on turn five, but it did not work out. By turn seven, I was back up to 33 life, and this time digging was successful but unnecessary since I could win with combat damage on the next turn. My third and final test was a mix of the first two, just a little slower. I got some insane lifegain going and was able to use Peer into the Abyss to draw into the Worldgorger Dragon combo on turn eight, enabling a win on turn nine. A win with combat damage would have been possible a turn later. All in all, it's nice to see these combos working, albeit at a slower pace than they would in a competitive deck. I also like havng the lifegain/angels theme, as I can lean on that instead if opponents are getting sick of the combos.

I then tested the deck with Licia, Sanguine Tribune as the commander. This round got off to a rocky start, as I did not see any black mana till several turns in and had a hand full of expensive cards with no way to get them into play. I was eventually able to goldfish a win on turn ten via combat damage to one player and commander damage to the other. The second game was also pretty slow, as I drew removal and utility spells that are less useful when goldfishing. I eventually got Licia onto the board, which led to a swift win off commander damage to one player on turn eight and then having 40+ life and Felidar Sovereign in play on turn nine. The third playtest at last hit Kaalia's pace, getting the Worldgorger Dragon combo into play on turn seven, producing infinite mana, with which I cast Words of Worship and Well of Lost Dreams. Then I cast Stinging Study, using it to gain 40 life (via Words of Worship) instead of drawing eight cards, but then I could just draw 40 cards with Well of Lost Dreams. Among the many creatures I could put onto the battlefield was Felidar Sovereign, so I presumably could win with it on my next turn. Demanding Dragon was also among the 40 cards drawn, so I guess if I was able to do all of this while Worldgorger Dragon was going off, then I could have cast that immediately for a win on the current turn.

I wrapped things up with a round of playtests using Tariel, Reckoner of Souls . This commander felt kind of useless in the first game, getting cast for +7 life off Angelic Chorus and that's about it. I goldfished with combat damage on turn nine. The second game went more smoothly, but Tariel was still useless; I won without her via combat damage on turn eight and could have won with Felidar Sovereign on turn nine. The final game started with a double mulligan, so I figured I was in for a long game. However, much to my surprise, I drew Dance of the Dead and was able to grab Buried Alive with Varragoth, enabling me to go off with Worldgorger Dragon on turn five. I was able to draw "only" 38 cards, of which Peer into the Abyss was one, leading to a draw of 24 more. With Angelic Chorus, I was able to gain tons of life by emptying my hand and winning with Felidar Sovereign on my next turn. Despite Tariel doing absolutely nothing again, this was the quickest win of all the playtests!

As a result of these tests, I'm realizing I want more targets for Buried Alive, ones that are useful on the other end of a Worldgorger Dragon loop.

Daxos the Returned might give a couple more exp counters but more importantly use the ones you already have to make blockers etc.

Tariel, Reckoner of Souls can bring out all the guys you murdered

If you're going to give deathtouch to a pinger you have to have get Goblin Sharpshooter, Wojek Embermage and maybe Frostwielder. coumbajj witches would be turned against you.

Proliferate affects Exp counters so anything with that would help.

Tariel, Reckoner of Souls seems like a really fun commander with a lot of different builds you could do. I don't lie Jenara, Asura of War mainly because it's kind of a boring card.

I've never made a grixis commander deck, I might have to try it out sometime!