At the beginning of each player's upkeep, that player untaps a land they control. Last Voyage of the Weatherlight
by Astaraen

Bant // Freeze The Time
by Giriel

A New Type of Amulet
by nbarry223 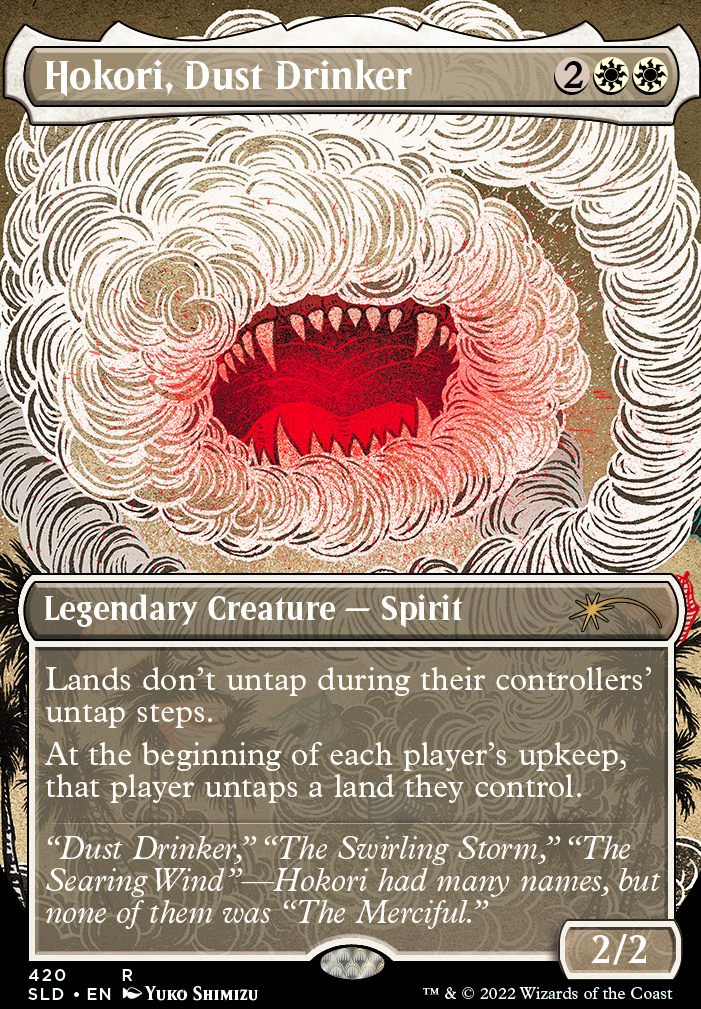 plakjekaas on Why are people calling for â¦

It's just a Commander that can only do annoying stuff to others. Not just once, but whenever anything happens with it, there's a huge bummer enclosed for one player at the table. Not bannable, but something to sigh at whenever someone reveals it as their Commander. Like Tergrid, God of Fright Â Flip, like Hokori, Dust Drinker, nobody who runs this at the head of a deck has fun in mind for the entire table, just annoyance for anyone who isn't them. I don't think that's the way to play a casual format, but I don't need a ban to explicitly tell me that. But they have banned Iona, Shield of Emeria so who knows what the RC will decide on it.

That being said, my prediction is that when you build the deck, and it does the thing a few times, it will get boring for the pilot soon enough that it won't be that much of a problem in the long term. I think the format has self-regulated worse cards than this before and it's more clout than this Commander deserves to be called out for instabanning.

wallisface on Which Specific Artifacts Have Been â¦

DemonDragonJ the argument of â[COLOR] is the color of [XXXX], so it should be able to do [YYYY]â isnât a great one, as itâs often used as a template by many, for advocating a colour doing anything it wants.

The most compelling argument for Winter Orb being white is the one raised by Gidgetimer mentioning the existence of Hokori, Dust Drinker. This is a big example of why it could be white, though I also feel like the color has changed a LOT since Hokoriâs printing, and by todays standard this might be a bend in the colour (though, hard to say, as there are so few cards printed with these kinds of effects). Iâm still leaning towards this being more of a blue effect than a white one.

Gidgetimer on Which Specific Artifacts Have Been â¦

Hokori, Dust Drinker would like a word about what color you think Winter Orb would be.

I don't necessarily have to break Hokori, Dust Drinker in here, it just needs to generate value, and one of the ways is if it is a one sided effect. I updated this to more of a prison build, using things like Thalia, Heretic Cathar to slow them down, Magus of the Moat as a moat effect, and Luminous Broodmoth as a way to get through that effect, and a form of protection for my prison pieces as well.

Since a lot of my pieces are higher CMC, it also makes better use of the excess mana from the amulet engine, dropping whatever 2 prison pieces I have at once in most cases.

So right now, I'd say my weakest cards are:


Main
2x Ancient Stirrings
1x Force of Vigor (won't be as needed thanks to Boseiju, Who Endures)


Side
2x Hokori, Dust Drinker (not going to lie to myself - aggro heavy meta isn't the place for it)
1x Firespout

So if anyone does have any good suggestions, I do have the wiggle room to fit them in.

I can imagine you're not to keen on running Winter Orb, but Hokori, Dust Drinker seems manageable.