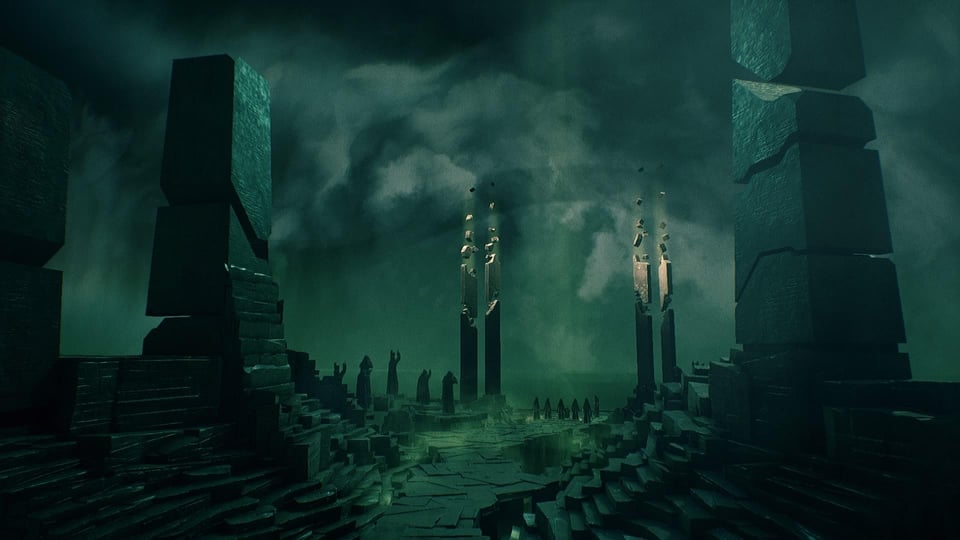 "I have seen beyond the bounds of infinity and drawn down daemons from the stars... I have harnessed the shadows that stride from world to world to sow death and madness..."

Though mechanically The Mimeoplasm is classified by its card type as a creature, I prefer to think of it as more of a ritual; the process of pulling together all the best features of creatures lost to memory to concoct a brand new abomination never before seen on any plane. This deck has a focus on early board control with a defensive, under-the-radar style of play while we set up, getting the right creatures into the graveyard to turn our Mimeoplasm into the unstoppable force we need it to be.

Fauna Shaman : Basically Survival of the Fittest on a body, she'll help you get the right things in the right places. That is to say, into the graveyard.

Hermit Druid : Lob large chunks of your library into the graveyard and hope to find something good.

Jarad, Golgari Lich Lord : Not only does he grow fairly naturally by himself, but his ability has the... ability to win the late game, turning our Mimeoplasm into a 3-player bomb for only 3 mana.

Lotleth Troll : Mainly used as a discard outlet though his regeneration makes him a decent blocker.

Brawn , Filth , Wonder : Getting these into your graveyard helps to give your creatures Trample, Swampwalk, and Flying respectively.

Setting up the Graveyard

, Life's Finale , Oriq Loremage , and Survival of the Fittest are the type of targeted cards that this deck needs to set up as efficiently as possible. Dream Halls is particularly useful for cycling our reanimation targets into our graveyard while giving us free spells (including our commander!) for it.

Grisly Salvage and Taigam's Scheming are a little less consistent, but Sultai Ascendancy

can help provide a bit more control to the flow of cards.

Inkwell Leviathan : Islandwalk, Trample, and Shroud means Mimeo is going to be hitting blue players hard, and trampling everybody else.

Jin-Gitaxias, Core Augur : Do I feel bad about including him? Yeah, kinda.

Sheoldred, Whispering One : Trade your opponents' creatures for your dead ones. Swampwalk is nice, too.

Simic Sky Swallower : One of our few flying creatures, with trample and shroud.

Skithiryx, the Blight Dragon : A staple in many Mimeo decks, and a pretty cool creature by himself.

Stormtide Leviathan : Basically unblockable, and the natural ability to keep most creatures out of combat.

Vorinclex, Monstrous Raider : A 6/6 with Trample and Haste is certainly a threat on its own, but as a Mimeo target, it becomes more scary. Due to a rules technicality, Vorinclex won't double the Mimeo counters placed on itself, but run alongside Mimeoplasm means your ooze will grow twice as large. Halving your opponents' counters is just icing on the cake.

Wrexial, the Risen Deep : Islandwalk, Swampwalk, and the ability to steal tutors, ramp cards, kill spells, and whatever else your opponents may have discarded.

, Victimize , and Vigor Mortis can be used to great effect to cheat out some of more useful creatures alongside our Mimeoplasm.

Once we have our Mimeoplasm built just as we need, our strategy shifts to beatdown. Using our reactionary spells and strategic attacks, we can easily use the pressure of massive commander damage to methodically mow down our opponents' battlefield presence, until nothing is left standing.

This deck plays like a combo deck at best and a reanimator deck at worst. The biggest flaw I experience with a concerning frequency is the speed of this deck. While I am often able to get the pieces to fall into place by turn 5 or 6 in preparation to cast Mimeo, if I am not able to find the right spells, this deck folds to faster, more aggressive decks. I am playing with the idea of adding tutors to help with consistency and reliability, but I am hesitant to rely on just one combo-wincon for ever single game. The major draw of Mimeoplasm for me is that it's an entirely different creature every time it's cast.

Cards I'm not sold on:
Archive Trap : Useful if the opponent has tasty creatures, but otherwise makes little impact.

Creatures I could add:
Cavalier of Thorns and Doom Whisperer both help set up our strategy, but if they're on the battlefield, chances are high that we're already prepared for beatdown-mode.
Vorinclex, Voice of Hunger would be awesome as well (including completing my collection of Sultai praetors), but I'm not sure who to cut.
Consecrated Sphinx : Coming Soon (maybe)

Any constructive suggestions are always appreciated!

Though I've been playing Magic since original Innistrad, the Tarkir era was when I started to seriously get into the game, and Commander specifically. The introduction of Sultai both as a clan, and as slang for my favorite three colors of Magic really struck a chord with me. Around this time, I was new to Commander, and only toyed around with making a Grixis deck. After seeing all the great cards coming out of Tarkir, I dropped those prospects and jumped straight to Sultai, settling on The Mimeoplasm as a commander, only narrowly beating Sidisi.

This deck has been with me for over 6 years, and I aim to upgrade and tune it with every new set release. It is one of the few decks that I've kept throughout several hiatuses and "breaks" from the game, and it's the one deck that I would truly consider to be "my deck."