Vanishing 3 (This creature enters the battlefield with three time counters on it. At the beginning of your upkeep, remove a time counter from it. When the last is removed, sacrifice it.)

The Esix Cloning Process
by Ziabo 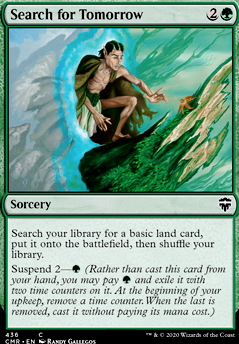 StopShot, that's why I "draft" differently. When I "draft", I buy a bundle of my choice and my friend(s) buy a bundle of their choice. Then you get 10 full packs to build with. None of this 6-pack nonsense from splitting a box, or this garbage-tier 1-card rotation nonsense.

I'm not sure if you can tell, but I really dislike Draft. It's my most hated "format". You can literally lose every single game the entire night because you had bad luck with packs. I once drafted and was forced into Jund because I had like maybe 6 or 7 cards of red, green and black. Not enough to make a Gruul / Rakdos deck and zero reanimation for Golgari. I also had zero removal. Blue held zero synergy and white made a couple of tokens and that was all, and I didn't want to splash a 4th color. Lost every single game. Some games I'd get 1 creature out and it'd die to immediate removal because that's all I fucking had and nothing else.

On the way out of the LGS I threw the entire stack of cards, with their sleeves, in the garbage can. I seriously can not stress enough how much I hate draft.

One of the single worst experiences I've had in all of Magic was when we were sitting down to draft Modern Horizons. Some lady to my right was there, not to play the game, but to finance buying packs. So, what she would do is log onto the TCG Player app and snap photos of EVERY SINGLE CARD to see what the most expensive card was that was given to her. That's what she picked. So in a 15 card pack, she'd snap a pic of 13 cards (minus basic land, minus token). Even if something was like $1.17 as a bulk rare, that's what she drafted. When that same pack gets back to her and she has to go through, idk maybe 9 cards now or whatever, she'd resnap the pics to find the $0.44 cent card. I was drafting Slivers, because of course I was, and the table was moving faster than she was. Eventually she had about six or seven piles of cards waiting for her to go through.

And INSTEAD of the table calling her out for this bullshit, they ARGUED WITH ME on how it was inappropriate of me to set the stack of cards aside.

LIKE HELLO?! I'M SORRY, TELL HER TO FUCKING PLAY THE GAME OR LEAVE. Not my fault that at a table with SIX PEOPLE, FIVE OF US CAN UNDERSTAND THE GAME AND ONE OF US CAN NOT.

Ugh. Tirade over. As for your design, with the partner-color restrictions, I happen to like this idea quite a lot. It does make sense, to a degree, but my concern is that it "locks" players into specific deck archetypes that they may not have the cards for. I think it creates another Piper situation, albeit the opposite.

In my example, I didn't have a single Commander. So if I drafted 15 white cards, thinking I'd eventually get a Commander later and it just never happened, I'm pretty much F-'ed. But if I draft a bunch of Commanders and none say that I can partner with , I'm equally screwed. Similarly, what if I get a bunch of Commanders who allow me to partner with or , but my cards are pretty heavy into Mardu? Now I have Commanders that don't actually allow me to play my deck.

I think the benefit of not having a color restriction is that it allows players to pull out of ruts they got dug into, literally by sheer bad luck. Because you can do all of the meta analysis and pre-game brewing and watching leaderboards and whatever, but the packs are randomized and nothing you do will change that. So if you go in absolutely certain Golgari Reanimator will be the #1 winning deck and you pull ZERO reanimation, you're not going to play Golgari Reanimator. Period.

I feel like the removal of the color restrictions opens the system up enough that players aren't forced into a situation where they literally can't play the game.

Bro. You play with the cards you picked or opened. Stop!

Deep Forest Hermit has to high of a mana cost though :C

Polaris is entirely correct if you are creating the tokens simultaneously, such as with the replacement effect of Esix, Fractal Bloom off of Deep Forest Hermit 's enter the battlefield effect. I did want to address another case of the tokens entering sequentially though. If you're duplicating an spell or ability, such as casting Fated Infatuation replicated thrice due to Djinn Illuminatus 's ability, each spell will resolve one at a time, so the original Champion of Lambholt will still get 4 counts, and one of the copies will get 3, another 2, another 1, and the final one won't get any. It really depends on how you're making the copies and if it's actually simultaneous.

Might I recommend putting in Mystic Reflection ? It goes really well with Deep Forest Hermit , creating 4 DFH's and 16 squirrels with +5/+5.

Hey! If you aren't necessarily running a Bear subtheme, maybe you should swap some of them for vanilla elves. You can strengthen your Elf synergy with Cylian Elf and Elvish Warrior , for example. Maybe a card like Nullhide Ferox works too. Your opponents may hesitate to activate its ability (if they activate, it loses hexproof but becomes unblockable), but I don't know if it is good or fun enough.

I think that other token generators can work very well with your commander. Avenger of Zendikar is a very strong creature that puts a lot of 0/1 tokens without abilities, so they are buffed by your commander. Deranged Hermit and Deep Forest Hermit can be very powerful in your strategy because they swarm the board, and G likes creatures on the field (you can use card draw like Shamanic Revelation or buffing effects like Beastmaster Ascension with better results). For card draw, maybe you should use Regal Force or something like it (benefit from tokens) or Guardian Project (tokens won't trigger it, but other creatures will).

If you go more for a token strategy, token doublers can help you a lot (that is, if you already have them or Quandrix commander from C21 didn't spike them). I don't know if the "return creatures from graveyard to your hand" is that strong. If it doesn't, maybe a token strategy works better. If you think that it goes against the idea of the deck (using cards forgotten in our boxes for ages), then really it's the case of running a lot of vanilla creatures (although I think that you should use them in the ideal quantity).

Don't know if it's worth, but you aren't running any boardwipes. Maybe Oblivion Stone helps you reset the board if opponents' boards become a problem. Other problem I see is recursion. I think that Eternal Witness is a green staple and maybe you should use it. Maybe swap a land for Bala Ged Recovery Â Flip. To deal with graveyards, maybe Scavenging Ooze is a great addition.

I don't know if cards like Blossoming Defense or Autumn's Veil worth the slots. If you go for a token, more go-wide strategy, maybe lose a creature or other does not affect your game thaaat much. Maybe you should swap them for card draw or recursion cards.

That's all I can think for now. Hope it helps :)

goodair on Squirrels in legacy

You can look into a nic-fit shell with Deep Forest Hermit/Deranged Hermit and whatever jank you want.

MagicMarc on Squirrels in legacy

Adding Red lets the deck get another way of winning by adding direct damage ability to the deck.

You put all your squirrel cards in that you want to use, right? For example; 4x Squirrel Mob, 4x Deep Forest Hermit, 4x Deranged Hermit and 4x Druid's Call. You can also use the wrangler and excavator, also any of the other squirrel cards like Squirrel Nest. Since you are also in Red, you then also get to play Burn cards,riot cards and anything in the Gruul family. Adding cards like Goblin Bombardment, Fling and Volcano Hellion gives an alternate win condition of direct damage. As well as more ways for explosive wins.

For example; Your life total is 20 and so is your opponent's. You have Squirrel Mob in play enchanted with Druid's Call. You also have Goblin Bombardment in play. You also have 4 other squirrels in play. You attack with the 6/6 mob and if you hit you do damage and if they can kill it you use protection to keep it around and if it took damage you get more squirrels and it gets bigger. Let's say they blocked it with a 4/4 and lost their creature and you get 4 more squirrels and now your mob is a 10/10 and you have a total of 8 other squirrels. What you then do is just cast Volcano Hellion targeting your Squirrel Mob in play enchanted with Druid's Call announcing any amount of damage you like. Let's say you announce 9. You and the mob both take 9 pts of damage. This creates 9 more squirrels bringing your squirrel count to 17. Your mob is now 19/19 and you have 17 squirrels to either sacrifice to goblin bombardment shooting your opponent in the face for 17 or wait and just attack with your mob again. If you put the right kind of protection for your creatures like stuff to make them indestructible or versions of giant growth you can name higher amounts of damage with the hellion and get even more creatures. Or just cast Fling, Soul's Fire or even Chandra's Ignition.

I didnt have anything solid in mind, just thinking of two color decks that would let squirrels put some hurt on people.