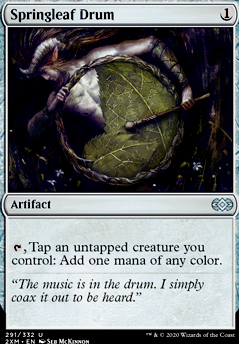 Eye In The Sky
by VensersJournalist

Will They Blame Me If You Go Disappearing
by pleH 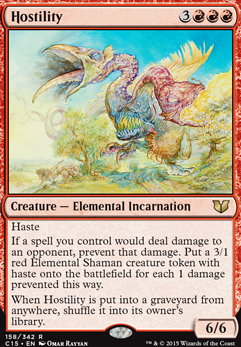 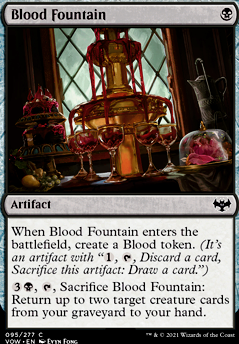 Springleaf Drum would be a good add, making the dorks pay for their own equips.

Omniscience_is_life on Why Do Some Players Dislike â¦

DemonDragonJ you do know that literally every single 3+ CMC mana rock is unplayable outside of EDH, right? Honestly, so are most 2- ones. Mind Stone sees some Modern play, and so does Springleaf Drum I think, but for the most part "mana rocks" as it were are an EDH construct. Legacy and Vintage see some fast ramp in the form of Moxen and such, but they'd never be caught dead with a fuckin Letter of Acceptance. This discussion is purely for EDH.

Wow, this is such a cool idea! I think there is a ton of potential for the golem + mystic forge combo. I think, though, that a lot of the affinity cards that you play lessen the strength of Mycosynth Golem - seems like you'd want to play things that would be busted if they had affinity and fewer things that already have it.

With that said, you'd probably benefit from the artifact dual lands from mh2: Razortide Bridge and Mistvault Bridge. It also seems like a perfect slot in for Urza's Saga. I would replace the nexus lands with the duals for sure.

Springleaf Drum is also just insane value for getting your artifact count up.

I really love this idea!

Hey JrtGil, thanks for your comment!! Iâm glad you enjoy the deck, it is quite brutal!

I appreciate the suggestion of Kaldra Compleat. I love the card and have run it before in earlier Stoneblade builds. The reason why I chose not to run it in this deck is because it almost impossible to cast without cheating it in with Stoneforge Mystic. The Hammers, Plating, and Spear are easily hard-casted, and their equip costs are mitigated by Sigarda's Aid and Puresteel Paladin. Kaldra usually sits dead in my hand until I draw a Mystic, then the Mystic has to survive a turn before I can cheat-in Kaldra. So the Mysticâs function is tutoring for an equipment more so than cheating-in costly equipment. Itâs easier to pull-off Kaldra in Stoneblade decks which run more control and disruption to protect their Mystics.

At first I didnât appreciate the power of Giver of Runes, but now I realize that she is equally both offensive and defensive. I can make my hammer-wielder unblockable against mono/double-colored decks, which is arguably better than trample, or protect my hammer-wielder against removal. Cards like Prismatic Ending are rampant in Modern right now, and if I canât protect my equipment, I can at least protect my Paladins and keep digging for more hammers.

I only run a single Shadowspear, since I can stack all the equipment on a single creature, and that creature will trample over the opponentâs blocker. I go for the spear later than the Hammers, so the opponent will use up their removal on a Hammer, and I can easily find another one.

I wouldnât discount Cranial Plating either. This deck plays artifacts rapidly. I can attach Plating at instant speed by generating black mana with Springleaf Drum and Silent Clearing, and even attach it to a flyer or Inkmoth with flying and infect, killing in one shot.

R00D-D00D No problem man! I think putting maybe 2 Bomb Squad in the main and the other two in the side board, they do seem kind of slow against aggro matchups, but in the long dame they will do work. I think Springleaf Drum deserves a full playset, I can't imagine drawing it and being upset lol. I'm not a tribal fan really, but I love to see different tribes other than vampires zombies elves and merfolk!!! Good luck on your deck, I really hope it comes along well.

Also have you considered Valakut, the Molten Pinnacle? Maybe just 1 or 2 can really help out!

Jabberjaw46 Thank you, I thought it was a good addition that may allow for higher CMC cards (Dragons) to come out too.

I really like Bomb Squad, and it would seem my average CMC allows for a playset (IMO). You're very helpful to point out that they have a free tap ability. I have always loved the very limited Dwarf cards and for many years have tried to make a viable tribal deck. Dwarven Bloodboiler , Dwarven Warriors and Blood Lust was the combo back in the day :-)

I am so happy that WotC finally brought back red Dwarves. As much as Kaladesh was great because of the return of the Dwarf.... Dwarves, to me, are red. Balthor the Defiled gets a pass. Springleaf Drum and Bomb Squad both seem like excellent additions. I'm thinking three of each, what do you think? That means six removals, and ideally I want more dragons too... I might reconsider the Twinscroll Shaman for sideboard.

I sent you a friend request by the way. Cheers!

Jabberjaw46 Hi, and many thanks for taking the time to comment. I have a playset of Bomb Squad - just out of curiosity; are you thinking that he'd make a good addition when paired with Magda's ability?

I am planning on updating, and was hoping to make space for at least 2 (perhaps a playset) of Springleaf Drum to ensure mana flows nicely, and allow Dwarves to tap if I'm not able to get the Bloodboiler out.

I'm not sure I will have space to splash white, nor fit Depala, Pilot Exemplar - I could rework the deck to include vehicles though, and that'd be an easy way to tap Dwarves in terms of crewing.